Why has the Obama administration so aggressively protected the financial industry from legal accountability? 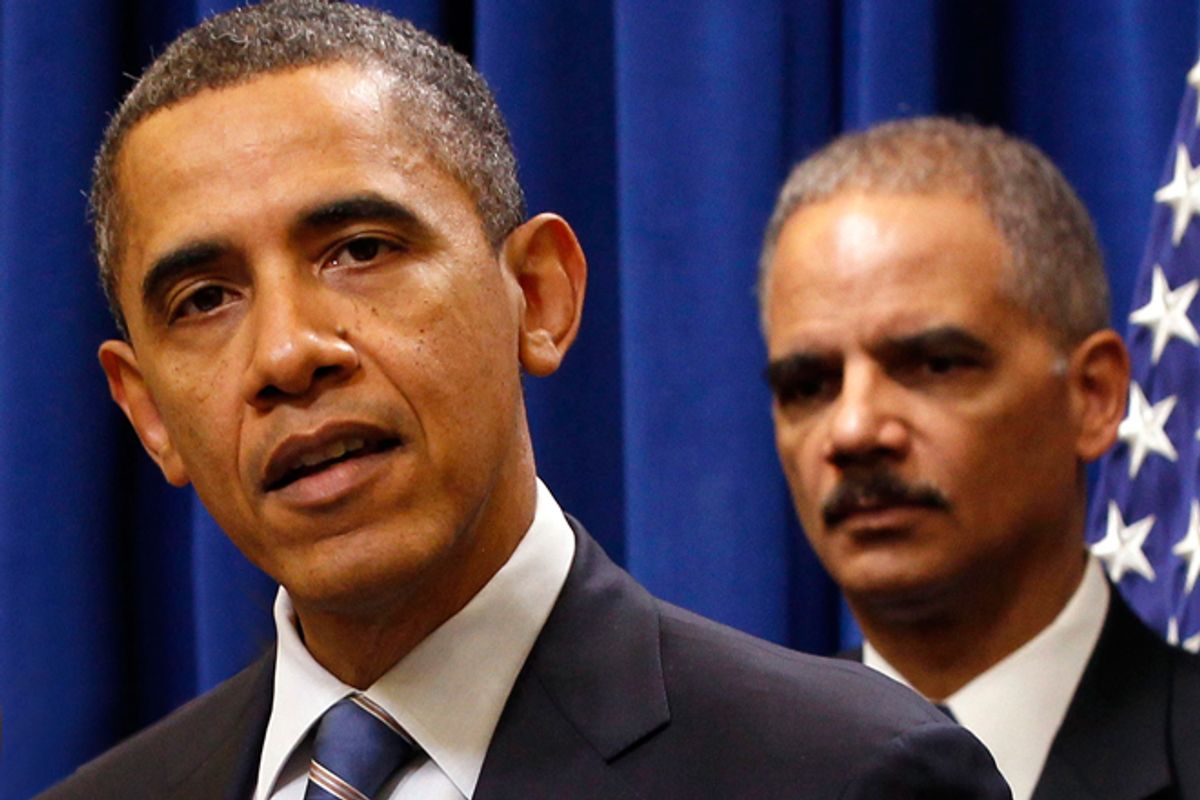 Of all the ignominious actions of the Obama administration, the steadfast, systematic shielding of Wall Street from criminal liability is probably the most corrupt in the traditional sense of that word. In Newsweek this week, Peter Boyer and Peter Schweizer have an excellent examination of what happened and why, tying together crucial threads. First they lay out the basic facts, including the core deceit of the President's campaigning for re-election like he's some sort of populist crusader:

With the Occupy protesters resuming battle stations, and Mitt Romney in place as the presumptive Republican nominee, President Obama has begun to fashion his campaign as a crusade for the 99 percent--a fight against, as one Obama ad puts it, "a guy who had a Swiss bank account." Casting Romney as a plutocrat will be easy enough. But the president's claim as avenging populist may prove trickier, given his own deeply complicated, even conflicted, relationship with Big Finance.

Obama came into office vowing to end business as usual, and, in the gray post-crash dawn of 2009, nowhere did a reckoning with justice seem more due than in the financial sector. . . .  Two months into his presidency, Obama summoned the titans of finance to the White House, where he told them, "My administration is the only thing between you and the pitchforks." . . .

Candidate Obama had been their guy, accepting vast amounts of Wall Street campaign money for his victories over Hillary Clinton and John McCain (Goldman Sachs executives ponied up $1 million, more than any other private source of funding in 2008). Obama far outraised his Republican rival, John McCain, on Wall Street--around $16 million to $9 million. As it turned out, Obama apparently actually meant what he said at that White House meeting--his administration effectively would stand between Big Finance and anything like a severe accounting. To the dismay of many of Obama's supporters, nearly four years after the disaster, there has not been a single criminal charge filed by the federal government against any top executive of the elite financial institutions.

The Newsweek reporters note that "financial-fraud prosecutions by the Department of Justice are at 20-year lows"; in fact, such prosecutions under Obama "are just one third of what they were during the Clinton administration" -- even though the 2008 financial crisis was drowning in financial fraud. Contrast that with the reaction of George H.W. Bush to the much less severe Savings & Loan crisis of the 1980s:

"There hasn't been any serious investigation of any of the large financial entities by the Justice Department, which includes the FBI," says William Black, an associate professor of economics and law at the University of Missouri, Kansas City, who, as a government regulator in the 1980s, helped clean up the S&L mess. Black, who is a Democrat, notes that the feds dealt with the S&L crisis with harsh justice, bringing more than a thousand prosecutions, and securing a 90 percent conviction rate. The difference between the government's response to the two crises, Black says, is a matter of will, and priorities. "You need heads on the pike," he says. "The first President Bush's orders were to get the most prominent, nastiest frauds, and put their heads on pikes as a demonstration that there's a new sheriff in town."

The Newsweek article offers two well-grounded theories for why Wall Street has been so aggressively protected by the DOJ. The first is that Obama filled his highest level Cabinet positions with Wall Street-subservient officials, beginning with Attorney General Eric Holder, who had been working as a highly-paid corporate lawyer for the law firm Covington & Burling, which represents "Goldman Sachs, JPMorgan Chase, Citigroup, Bank of America, Wells Fargo, and Deutsche Bank." The other top-tier DOJ positions were similarly filled with corporate lawyers from large law firms closely tied to and depended upon the financial industry. The problem is obvious:

Some suggest there is also the potential for conflicting interest when the department's top officials come from lucrative law practices representing the very financial institutions that Justice is supposed to be investigating. "And that's where they're going back to," says Black. "Everybody knows there is a problem with that." (Two members of Holder's team have already returned to Covington.)

Why would top DOJ officials -- with bulging bank accounts from prior Wall Street service and, with their elevated status as top DOJ officials, future plans for even more bulging bank accounts upon returning -- possibly alienate the very industry that will enrich them by prosecuting its top-level criminals? The full-scale immunity bestowed on Wall Street provides the answer.

Then there's the reliance on Wall Street money for President Obama's re-election effort. Newsweek notes the multiple investigations that documented numerous criminal acts leading to the financial crisis, including some explicitly incriminating top Wall Street firms such as Goldman Sachs. Anticipating possible indictments, "Goldman executives, including the firm's chief executive officer, Lloyd Blankfein, started hiring defense lawyers." Moreover, Black "says the conduct could well have violated federal fraud statutes--'securities fraud for false disclosures, wire and mail fraud for making false representations about the quality of the loans and derivatives they were selling, bank fraud for false representations to the regulators.'" Beyond the Wall-Street-subservient officials, why have those led to no prosecutions?

Meanwhile, Obama's political operation continued to ask Wall Street for campaign money. A curious pattern developed. A Newsweek examination of campaign finance records shows that, in the weeks before and after last year's scathing Senate report, several Goldman executives and their families made large donations to Obama's Victory Fund and related entities, some of them maxing out at the highest individual donation allowed, $35,800, even though 2011 was an electoral off-year. Some of these executives were giving to Obama for the first time.

Justice insists that political operations such as fundraising are kept strictly distanced from the department, in order to avoid even the appearance of political influence. But the attorney general and his team are not unfamiliar with the process; Holder was himself an Obama bundler--a fundraiser who collected large sums from various donors--in 2008, as were several other lawyers who joined him at Justice.

It would be a leap to infer these Goldman contributions were made--or received--as quid pro quo for dropping a criminal investigation. Still, the situation constitutes what one Justice veteran acknowledged is a "bad set of facts."

The article goes on to detail the pressure that was continuously placed by the Obama administration on state attorneys general to agree to a lax settlement with banks regarding foreclosure fraud, and how they ultimately co-opted the holdouts to agree to the deal. It notes that while Obama, through last fall, "had collected more donations from Wall Street than any of the Republican candidates" (even "employees of Bain Capital donated more than twice as much to Obama as they did to Romney, who founded the firm"), Wall Street money is now beginning to flock to Romney. That's almost certainly because Wall Street dislikes some of Obama's populist rhetoric (financial industry executives are very sensitive and coddled and dislike any hint of criticism, no matter how symbolic and insincere) and because Romney is one of them (they certainly can't go wrong with Romney either). But it also is clear that they are attempting to leverage Obama's need for their support into even further concessions: ones that, if the past is any indication, will be eagerly forthcoming.

This is a vital part of the Obama legacy. The prior decade witnessed the most egregious crimes imaginable by the nation's most powerful actors: torture and warrantless eavesdropping from political officials (with the aid of corporate giants), and massive fraud from financial elites. None has been held accountable; the opposite is true: the Obama administration has steadfastly protected all of them. Echoing the prime theme of my last book -- that America's elites are virtually immune from the rule of law -- the Newsweek article notes:

Maintaining public faith in the justice system is one of the reasons why people such as Angelides continue to call for a rigorous criminal investigation into Wall Street. "I think it's fundamental that people in this country need to feel that the justice system is for everyone--that there's not one system for those people of enormous wealth and power, and one for everyone else," he says.

But that's exactly the principle that has undergone such a relentless assault under this administration. That general development is odious in its own right. That the specific shielding of Wall Street is driven by such corrupt ends makes it even worse. But the worst part of it all is that Obama is going to spend the next six months deceitfully parading around as some sort of populist hero standing up for ordinary Americans and the safety net against big business, and hordes of people who know how false that is will echo it as loudly and repeatedly as they can, tricking many people who don't know better into believing it.