Retired Philadelphia Police Capt. Ray Lewis could lose his life insurance for wearing his uniform to a protest 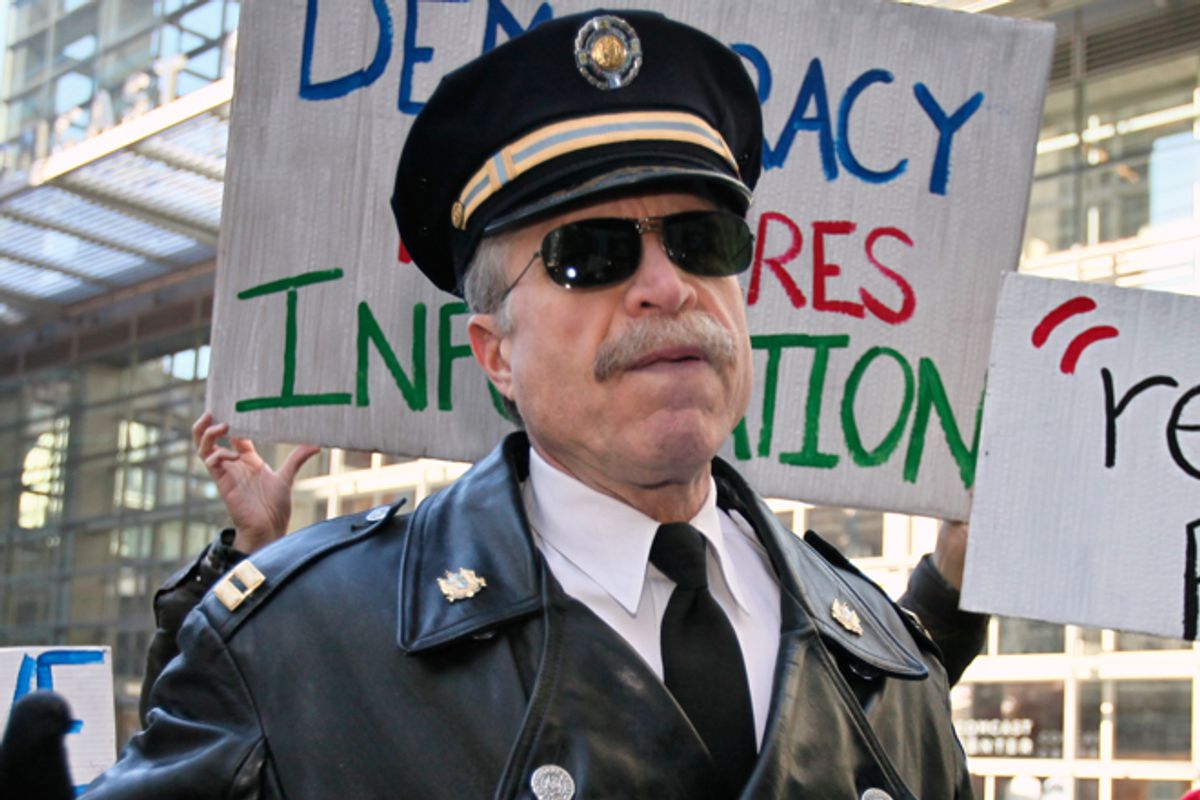 On Occupy Wall Street's Nov. 17 Day of Action, the NYPD arrested nearly 250 protesters. Ray Lewis, however, stuck out: the retired Philadelphia Police captain was dressed in uniform. He was holding a sign that on one side encouraged people to watch the Charles Ferguson financial crisis documentary "Inside Job." On the other: “NYPD Don't Be Wall Street Mercenaries.”

Ramsey soon backed down, citing Lewis' First Amendment rights. Not so for the politically powerful Fraternal Order of Police Lodge 5, led by president John McNesby, which has continued its campaign against Lewis.

FOP pension director Henry Vannelli has filed a grievance that could prompt Lewis' expulsion from the FOP, cutting him off from the life insurance and free legal support offered to current and retired officers.

The FOP, which frequently and vociferously defends police accused of excessive force and other misdeeds, must really hate Lewis. As Philadelphia Daily News reporter William Bender put it in a recent story,

It's usually tough to get kicked out of Philadelphia’s Fraternal Order of Police.

You really have to screw up.

Worse than, say, the cop who allegedly beat his girlfriend with a closed fist and left her a voice mail threatening to 'stomp your f---ing heart out.' Or the officer convicted of child endangerment for pointing a loaded Glock at a kid who changed the radio station in his truck at the Police Academy.

Or the cop who allegedly forced a suspect to perform oral sex on him in his police cruiser.

Indeed. The FOP, which did not respond to a request for comment, makes no secret of the fact that its attack on Lewis is an extraordinary one: “It's quite unusual,” Vannelli told the Daily News. “We had to dig into the books to see what we could do and and couldn't do ... We don't want that guy around.”

McNesby even continues to insist that Lewis should be arrested, even though Commissioner Ramsey has long since clearly acknowledged that one is not “impersonating a police officer” if they are “not pretending to be a cop.”

“That is so egregious of a thing to say, because what he's telling all of those officers in Philadelphia is that they should violate the law,” Lewis tells Salon. “There's enough violation of people's rights already.”

The same day that Bender's report was published, the Daily News' Jason Nark wrote a companion article on an eccentric lawyer and donor to police causes named Jimmy Binns, who, well, likes to dress up like a cop. A lot. It's even alleged that he once illegally sported a handgun — but was not arrested by Margate, N.J., police because he's a friend of the police chief. According to the Daily News, that crime carries a mandatory three- to five-year sentence. And Binns has illegally parked his car with an “Official Business” placard from the commissioner’s office lying across the dash, according to Temple University journalism professor George Miller.

Lewis continues to protest. In uniform. Last week he was in Center City Philadelphia, protesting outside police and FOP headquarters. He says that FOP leadership , a major force in city politics, depends on corporate donations to finance its union election campaigns and quarterly magazine.

“The major part of the movement is to hold corporations accountable and to stop them from having so much control over lives and the earth," he says. "If John McNesby is a receiver of the favors of corporate America, then I'm going to be the number one enemy. Because I'm a tactical warhead.”