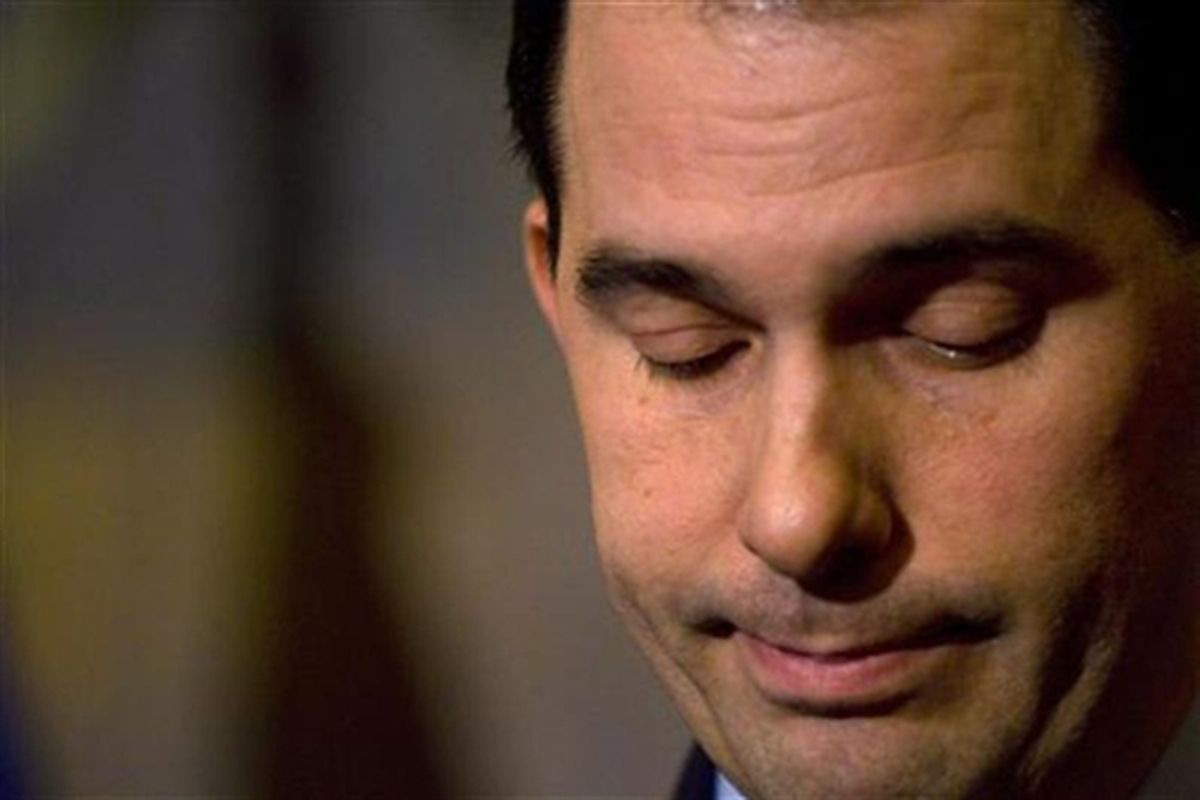 Labor has taken a beating. While private companies squeeze and lock out workers, resurgent right-wingers have pushed anti-union bills in statehouses around the country. But after a seemingly relentless national assault provoked dramatic pushback in Wisconsin and elsewhere, some Republicans are … relenting.

Take Minnesota. 2010’s red wave flipped both the state House and Senate, putting Republicans in unified control of the Legislature for the first time in 38 years. In January 2011, just after they took office and just before an uprising erupted in neighboring Wisconsin, Minnesota Republicans introduced Right to Work – a bill to defund unions by banning contracts that require workers represented by them to pay for representation. To get around newly elected Democratic Gov. Mark Dayton, Republicans proposed Right to Work as a constitutional amendment, requiring approval from the voters, but not the governor.

But 16 months later, the Minnesota Legislature ended its session Thursday without a vote to put Right to Work to the voters. The bill has been attached to, then detached from, other legislation. It’s been introduced, and reintroduced. But Republicans won’t give it an up-or-down vote in either house. Just after 2 a.m. on April 27, Republican Rep. Mark Buesgens made a last-ditch attempt to transfer Right to Work from the Commerce Committee, where it had stalled, to the Rules Committee. But Republican colleagues tabled his motion by a 118-to-9 vote. Republican Sen. Michelle Benson, who pushed for the bill’s passage, says it’s now a lost cause until next year’s session.

What happened? In interviews with the Associated Press last month, a spokesperson for the Minnesota Senate majority leader called right-to-work “such a divisive issue.” GOP state Rep. Tony Cornish cited the prospect of “millions of dollars coming in from other states, and thousands of people. Buses emptying out, banners, people camping.” In other words: the fear of becoming the next Wisconsin.

Minnesota AFL-CIO president Shar Knutson says that the year’s high-profile battles in other states had had “a large impact” in discouraging Minnesota Republicans.  “You’ve seen what’s happened in Wisconsin and Ohio,” says Knutson. “There’s a lot of money that goes in, a lot of volunteers, a lot of people out on the streets working hard. So yeah, I’d be nervous if I were them too.” Wisconsin Gov. Scott Walker’s attack on collective bargaining provoked a 17-day occupation of the state capitol and landed him a recall election next month; Ohio Gov. John Kasich’s assault was overturned by voters in a 61-to-39 referendum vote.

Sen. Benson says that the threat of union payback at the ballot box “was enough to divide our caucus.” She attributes her colleagues’ reticence to their “justified concern that the unions, with their massive coffers, will come after people in swing districts.” Asked about the impact of Wisconsin and Ohio, Benson says that “Minnesota is not Wisconsin,” but grants that “Nothing occurs in a vacuum.” Wisconsin and Ohio, says Benson, show that “the unions are afraid of the change that is happening in this country, and they will work vigorously against any attempt to cause them to step back from their current position.”

The ranks of now-reluctant Republicans -- call them the Cold Feet Caucus -- extends beyond Minnesota. In February, the House Commerce and Energy Committee in deep-red South Dakota voted to kill a bill that would have banned collective bargaining for public workers. The AP reported that Rep. Brian Liss, the bill’s main sponsor in the House, blamed his colleagues’ votes on fears for reelection. Ten days earlier, one of the bill’s Senate sponsors, Republican Stan Adelstein, announced he was withdrawing his support and would oppose the bill instead. “Further study,” Adelstein said in a statement, “has shown me that South Dakota is NOT Wisconsin, and passage of this bill into law would cause grievous harm.” Adelstein may have meant that South Dakota didn’t need the same labor relations “reform” that Wisconsin did. But his constituents could be forgiven for inferring a different message from his all-caps contrast: I’m not a Walker-style Republican.

The presumptive GOP nominee for Washington state governor is also taking pains to send a “What, Me Walker?” message. Last month, in audio obtained by Politico, Attorney General Rob McKenna told a meeting of Puget Sound Carpenters, “Now, unfortunately, because of a couple of governors – particularly Scott Walker – everyone thinks that someone who’s going to be a Republican governor, they’re going to be Scott Walker. I’m not Scott Walker. This is not Wisconsin.” A spokesperson for McKenna’s presumptive Democratic opponent, who has made a point of tying McKenna to Walker, retorted to Politico that McKenna had pushed to privatize workers' compensation, and “called the unionization of state employees ‘dangerous.’”

After Michigan Republicans passed an “emergency manager” law that allows appointees of Gov. Rick Snyder to throw out some local union contracts, some planned to push their own right-to-work bill. But facing a Wisconsin-style recall effort against Snyder, an Ohio-style referendum effort against the emergency manager law, and a pro-union constitutional amendment drive, the House’s leading right-to-work backer has held off on introducing a bill. Rep. Mike Shirkey told Michigan’s News-Herald last month that he wasn’t dragging his feet on right-to-work because of the pro-union efforts, but declined to say when he would introduce his own bill.

Despite these Republican retrenchments, labor faces a continuing crisis. Witness Indiana, which became the industrial Midwest’s first right-to-work state this year, or New Hampshire, which if not for a gubernatorial veto would have become New England’s. Or Connecticut, where liberal Democratic Gov. Dan Malloy proposed “education reform” that would curb collective bargaining for teachers in “low-performing” schools.

So the Cold Feet Caucus isn’t cause for labor to relax. Rather, it’s a reminder of what’s at stake in higher-profile battles – especially in Wisconsin, where Democratic voters this week nominated Tom Barrett to face down Scott Walker in next month’s recall. Four weeks out, the race is much too close to call. But it’s safe to say either unions or their opponents will emerge emboldened after the June 5 vote – not just in Wisconsin, but around the country.

If Walker ekes out a victory, it won’t represent a decisive mandate for legislative union-busting. But it will be enough to get some Republicans over their cold feet.