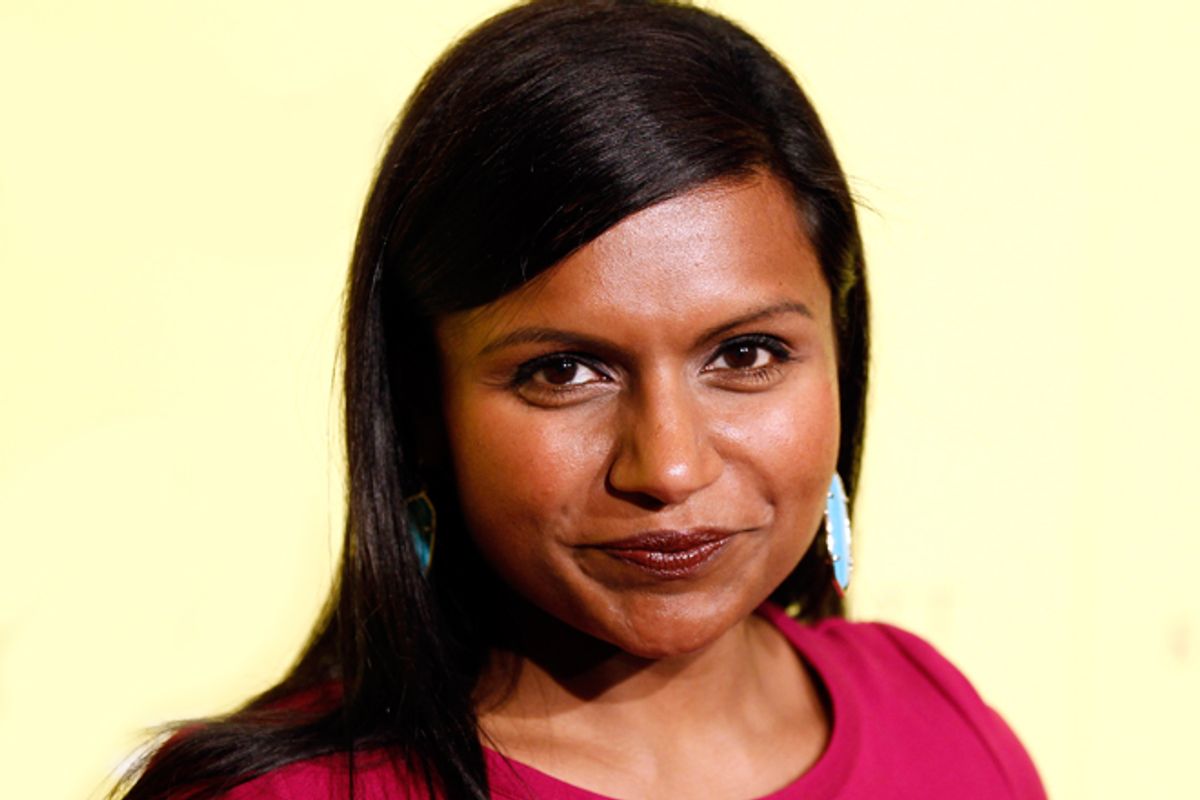 After an exhausting year of would-be TV manic dream girls trying to charm, seduce and pratfall their way into our hearts, this fall we get the woman we've wanted all along. Let the finger crossing for "The Mindy Kaling Project" commence!

On the surface, a sitcom about a young, kooky OB/GYN with a spotty dating history and a penchant for getting falling-down drunk doesn't exactly scream "groundbreaking." But it's the presence of the woman who's given us the fearlessly self-obsessed Kelly Kapoor on "The Office" all these years, who wrote a book called "Is Everyone Hanging Out Without Me?" and who launched her career channeling Ben Affleck in a play, that gives the show the distinct possibility of actually not sucking.

Why is Kaling great? Why does her formulaic show look considerably more promising than the already-canceled-in-my-mind "Guys With Kids"? For starters, she's already been at it for seven years. TV is her zone. She doesn't harbor the affected air of a stand-up comic or a slumming movie star, trying to cram herself into 22 fake-fun minutes. Instead, like "SNL" veterans Tina Fey and Amy Poehler, she's got a natural flair and rhythm for the medium.

She's also appealing because in a world full of muti-hyphenate female talents, not all of them juggle being writers and performers with her finesse. Kaling isn't some ukulele-playing girl-woman trapped in a fluffy pink hell of her own making. Her characters may be immature, for sure, but they don't seem perennially stuck in a wide-eyed, love me love me love me shtick. Nor is Kaling herself, despite the obvious comparisons "The Mindy Kaling Project" invites to the drunky slutty chick vehicles of Chelsea or Whitney. The confrontational, aggressive energy that made Handler and Cummings successful in stand-up and talk shows never gelled in the collaborative world of scripted comedy. Their attempts at humor seemed flat and obvious, the mere barking of supposedly shocking one-liners. Kaling, on the other hand, knows how and when to let a costar be ridiculous, the better to make the whole scene fiercer and funnier. And as for the (totally justified) accusations of casual cultural insensitivity on "Two Broke Girls" and the lack of diversity on "Girls," well, one look at Kaling on a bike screaming "Racist!" at a passing motorist in the preview offers hope of a considerably broader perspective.

What makes Kaling so promising, however, isn't all that she is not. It's that she's so charmingly flawed, so enthusiastically believable even when she's doing cliché bits like gluing her hands together in a taxicab prayer for a good date. (Has anyone, in the history of the world, ever done this?) She may not be entirely convincing as the person you'd want wielding a speculum in your direction, but as situation comedy's most likable mess, she's just what the doctor ordered.