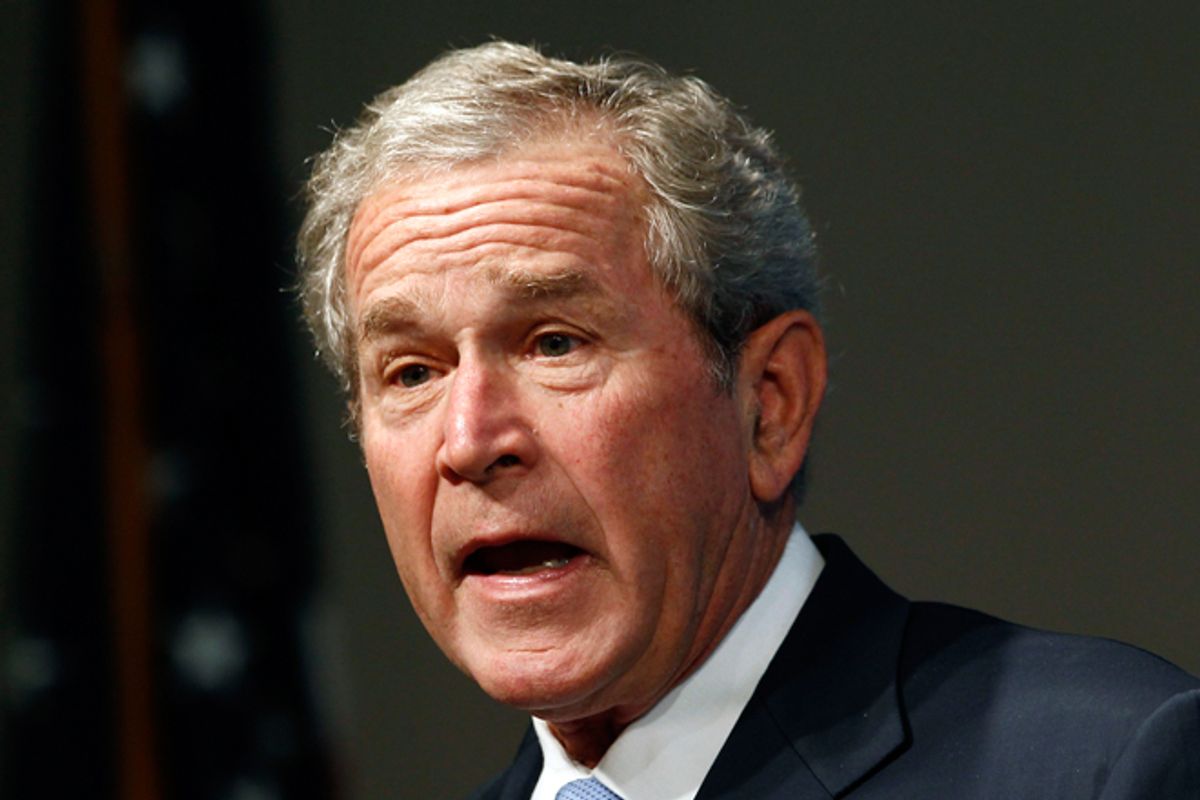 George W. Bush may have established a new world record today for the shortest, most awkward public endorsement statement in presidential campaign history:

“I’m for Mitt Romney,” Bush told ABC News this morning as the doors of an elevator closed on him, after he gave a speech on human rights a block from his old home — the White House.

The reason for this strange scene is obvious: Romney and his fellow Republicans want absolutely nothing to do with the 43rd president, lest voters connect the epic financial meltdown that played out on his watch to the economic anxiety they’re now feeling. As Jamelle Bouie explained today, the case that Romney is making for voting out President Obama depends on the public downplaying (or forgetting altogether) that he inherited an economy that was in the throes of a crisis not seen in generations:

In this narrative, the GOP didn’t mismanage the economy into the deepest downturn since the Great Depression. Rather, the economic crisis simply happened, ex nihilo, and Obama did nothing to stop or mitigate it. What’s more, he made things worse, with government spending and an explosion of debt.

The problem for Obama, as Bouie points out, is that there’s real appeal to this story. The electorate tends to exist perpetually in the present tense, with little collective memory or foresight. Republicans began banking on this the moment Obama was sworn in: Just stand against everything he’s doing, and if the economy remains in rough shape, sooner or later the public will hold him responsible, just because he’s the guy in charge. As it turned out, it took only about nine months for Obama’s approval rating to fall under the 50 percent mark, and it’s hovered around there ever since, putting him in danger of losing this fall.

One way the Obama campaign is attempting to counteract this is by challenging Romney’s own economic and job-creation credentials. The presumptive GOP nominee has been relentlessly touting his business (and not government) experience, hoping that voters will assume he knows how to fix the economy because of his private sector success. Polls suggest voters are buying it, at least to a degree, with Romney generally outpacing the president by several points on which candidate would be better on creating jobs and boosting the economy. This is the reason Obama’s campaign unveiled a brutal two-minute attack ad yesterday on Romney and Bain Capital on Monday; the idea is to convince voters that there’s not necessarily a connection between making money in business and understanding how the economy works.

It’s hard to say whether this will work. Romney is fighting back by highlighting jobs that were created through Bain and with a new video that tells the stories of struggling Americans who have been victimized by “the Obama economy.” As Greg Sargent explains, the video is a perfect reflection of both the misleading simplicity of Romney’s message and its potential effectiveness. There’s just a lot the Romney campaign can say and do to deflect from the impact of the Bain attacks.

In this way, Bush’s very brief reemergence today raises the question of whether Obama ought to be invoking his predecessor more frequently and more explicitly, and to make him a more central figure in the campaign. Polls show that voters still remember what happened on Bush’s watch and still hold him responsible for at least some of the country’s current problems. Obama does frequently make reference to what he inherited, and to the failure of the GOP to come up with a new economic platform during its White House exile. But more than anything else, it seems that Romney’s campaign fears being tied to Bush. And Bush, as his elevator trick shows, is willing to help them out by remaining inconspicuous. If Obama’s team wants it, there’s some slack to be picked up.