An Executive order seeks to punish U.S. citizens even for "indirectly" obstructing dictatorial rule in Yemen 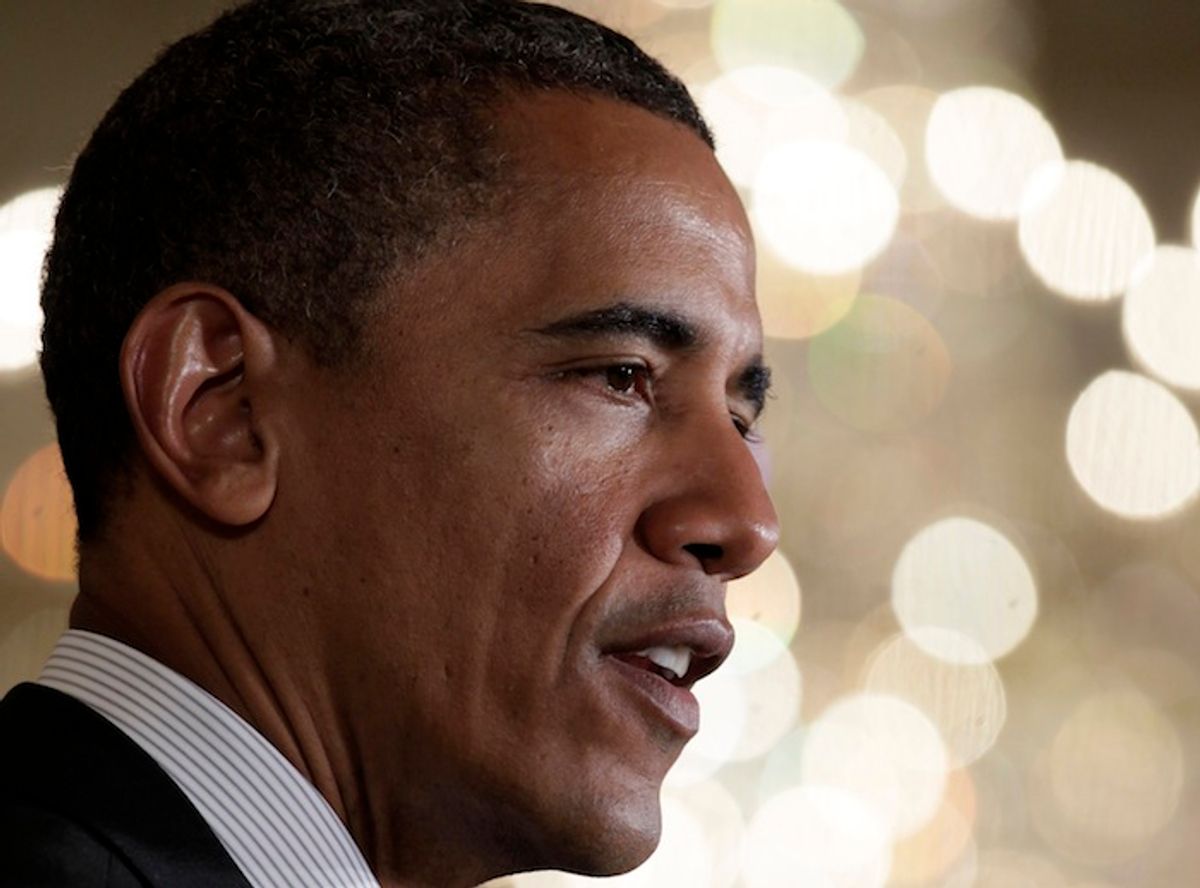 There is substantial opposition in both Yemen and the West to the new U.S.-backed Yemeni President, Abed Rabbo Mansour Hadi. Hadi was the long-time Vice President of the Yemeni dictator Ali Abdullah Saleh, and after Saleh finally stepped down last year, Hadi became President as part of an "election" in which he was the only candidate (that little fact did not prevent Hillary Clinton from congratulating Yemen "on today's successful presidential election" (successful because the U.S. liked the undemocratic outcome)). As it does with most U.S.-compliant dictators in the region, the Obama administration has since been propping up Hadi with large amounts of money and military assistance, but it is now taking a much more extreme step to ensure he remains entrenched in power -- a step that threatens not only basic liberties in Yemen but in the U.S. as well:

President Obama plans to issue an executive order Wednesday giving the Treasury Department authority to freeze the U.S.-based assets of anyone who "obstructs" implementation of the administration-backed political transition in Yemen.

The unusual order, which administration officials said also targets U.S. citizens who engage in activity deemed to threaten Yemen's security or political stability, is the first issued for Yemen that does not directly relate to counterterrorism.

Unlike similar measures authorizing terrorist designations and sanctions, the new order does not include a list of names or organizations already determined to be in violation. Instead, one official said, it is designed as a “deterrent” to “make clear to those who are even thinking of spoiling the transition” to think again. . . .

The order provides criteria to take action against people who the Treasury secretary, in consultation with the secretary of state, determines have "engaged in acts that directly or indirectly threaten the peace, security or stability of Yemen, such as acts that obstruct the implementation of the Nov. 23, 2011, agreement between the Government of Yemen and those in opposition to it, which provides for a peaceful transition of power . . . or that obstruct the political process in Yemen."

In other words, the U.S. Government will now punish anyone who is determined -- in the sole discretion of the U.S. Government -- even to "indirectly" obstruct the full transition of power to President Hadi. But what if someone -- a Yemeni or an American -- opposes Hadi's rule and wants to agitate for a real election in which more than one candidate runs? Is that pure political advocacy, as it appears, now prohibited by the U.S. Government, punishable by serious sanctions, on the ground that it "obstructs" the transition of power to Hadi? Can journalists who report on corruption or violence by the Hadi regime and who write Op-Eds demanding a new election be accused, as it seems, of "threatening Yemen's political stability"?

Jeremy Scahill, who has reported extensively from Yemen over the last year, reacted to the news of this Executive Order this morning by writing: "This Executive Order appears to be an attack on Americans' 1st Amendment Rights and Yemenis' rights to self-determination"; he added: "apparently the 1st Amendment had an exception about Yemen in it that I missed." He then asked a series of questions, including: "What if a Yemeni citizen doesn't believe in a one candidate 'election' and is fighting to change their government? US sanctions?" and "How would Obama define an American citizen as 'indirectly' threatening the stability of Yemen's government?" and "what if an American citizen doesn't support Yemen's government and agitates for its downfall? Sanctions from US Treasury? Wow." Marcy Wheeler has some typically astute points to make about this as well.

The Post article notes that, as unusual as this Executive Order is, Obama issued a similar one for Somalia in 2009, and it has one other precedent: "In 2006, President George W. Bush issued a similar order regarding Ivory Coast in West Africa." Newspapers should just create a template that says that for every article: this radical and controversial power that Obama has just seized for himself has its genesis in the executive power and war theories of Bush/Cheney. Except for the power to secretly target U.S. citizens for due-process-free assassination-by-CIA and the manic war on whistleblowers -- those are Obama originals -- that's a reliable claim to make, which is the point.

When I first began writing about Bush's War on Terror abuses, I would sometimes be asked whether America still protects certain liberties more than most other countries, and my answer would always be the same: First Amendment rights in the U.S. of free speech and a free press are still more robust than most other countries in the world. It was one realm which the Bush War on Terror had by and large -- not entirely, but by and large -- left alone. That is just no longer true. Under Obama, we have seen a series of aggressive erosions of even this right in the name of Terrorism.

The Obama DOJ persuaded the U.S. Supreme Court in Holder v. Humanitarian Law to adopt an extraordinarily broad interpretation of "material support" statutes, such that, as Georgetown Law Professor David Cole put it, the Court "--for the first time in its history—[held] that speech advocating only lawful, nonviolent activity can be subject to criminal penalty, even where the speakers’ intent is to discourage resort to violence." We now routinely see from the Obama DOJ Terror prosecution of Muslim Americans grounded in the expression of their pure political views. Long before any alleged evidence emerged that U.S. citizen Anwar Awlaki had any involvement in any Al Qaeda plots, the Obama administration placed him on a "hit list" because of its fear of the efficacy of his anti-American sermons. American Muslims are routinely targeted by sophisticated FBI entrapment campaigns if their criticisms of U.S. foreign policy (constant bombing of Muslim countries) is sufficiently strident.

There seems to be little question that the Obama administration is devoted to imposing dictatorial order on Yemen through the use of force and liberty abridgment. As Scahill previously reported, Obama has played a direct personal role in the ongoing imprisonment of a Yemeni journalist who committed the crime of documenting the large number of civilian deaths from a U.S. cluster bomb attack on his country as well as exposing the joint lies of the Yemeni and U.S. Government. The latest U.S. drone strike in Yemen yesterday, even according to Yemeni officials, killed more civilians than alleged "militants."  The bombing campaign in Yemen now increasingly resembles the one conducted in Pakistan, though Yemen saw more drone strikes this month than any previous month in Pakistan. AP reported yesterday that there are now U.S. troops on the ground aiding Yemeni soldiers in their fights against alleged AQAP members.

What's most amazing about all of this is how covert it is. What percentage of Americans even know that the Obama administration is continuously bombing and killing civilians in Yemen, or that American soldiers are now on the ground there in an advisory capacity? How many network news shows air any questions about any of this, and how many MSNBC shows (other than this one) have ever stopped talking long enough about all the supreme GOP Evil to even mention to their progressive audience that any of this is happening or aired questions and challenges about it? I'd be willing to bet that the vast, vast majority of Yemen mentions -- almost all -- entail little more than grave warnings about the scary threats emanating from there against the U.S., combined with gleeful celebrations of all the glorious Terrorist Kills our strong, resolute, brave Commander-in-Chief has commanded. In the meantime, not only endless militarism and war march on unabated, but so, too, does the erosion of core liberties which it entails.

Speaking of ongoing erosions of core liberties: a bipartisan group of House members is attempting to enact a law specifying that the indefinite detention powers vested in the President by last December's passage of the NDAA does not apply to those arrested on U.S. soil; in other words, they are trying to ban military detention on American soil without charges. Even though President Obama, after he signed the bill into law, said he does not intend to use these powers for that purpose, the sponsors of this bill are concerned that -- because the law does vest this power -- Obama could change his mind at any time or a subsequent President could use those powers. Unfortunately, they are being opposed by key Democratic Senators such as Carl Levin in close cooperation with standard neocon members of Congress. As one tweeter wrote to me yesterday about this: "The fact that government has to be told NOT to do that is insane." Indeed, and it's easy to forget how frequently true that is. But the War on Terror has so normalized even the most warped powers -- warrantless eavesdropping, torture, indefinite detention, renditions, due-process-free-assassinations, Executive Orders like the one today -- that it's sometimes easy to forget that this is the only real reaction that should be needed.

UPDATE: Those wishing to defend actions such as the issuance of this Executive Order typically argue that although it has the potential to sweep up legitimate and innocent political activity, the U.S. Government intends to use it only to constrain the Bad People: those who seek to use violence or other illegitimate means to achieve their end. Click here for a very partial history of that assurance and then decide if you feel comfortable trusting it.

UPDATE II: The Executive Order has now been issued and, as Marcy Wheeler notes, it is extremely similar to what the Post article described (which makes sense given that the Post article was based on the statements of anonymous officials authorized to speak about it). The EO blocks the assets of "any person determined by the Secretary of the Treasury, in consultation with the Secretary of State, to have engaged in acts that directly or indirectly threaten the peace, security, or stability of Yemen." One difference between this EO and the prior one issued for Somalia is that this one exempts U.S. government agencies, which means, as Wheeler puts it, that "while Obama doesn’t want you, or Ali Abdullah Saleh’s leave-behinds, or the AP to destabilize Yemen, he reserves the right for US government employees, grantees, or contractors to do so. Which presumably means, as happened in Afghanistan, we are and plan to continue paying some of the people who are in violation of this EO." It is, then, in so many respects, a perfect expression of American justice when it comes to the War on Terror.