The "Borat" creator's nutty Arab "Dictator" moves to Brooklyn, falls in love -- and schools the West in democracy 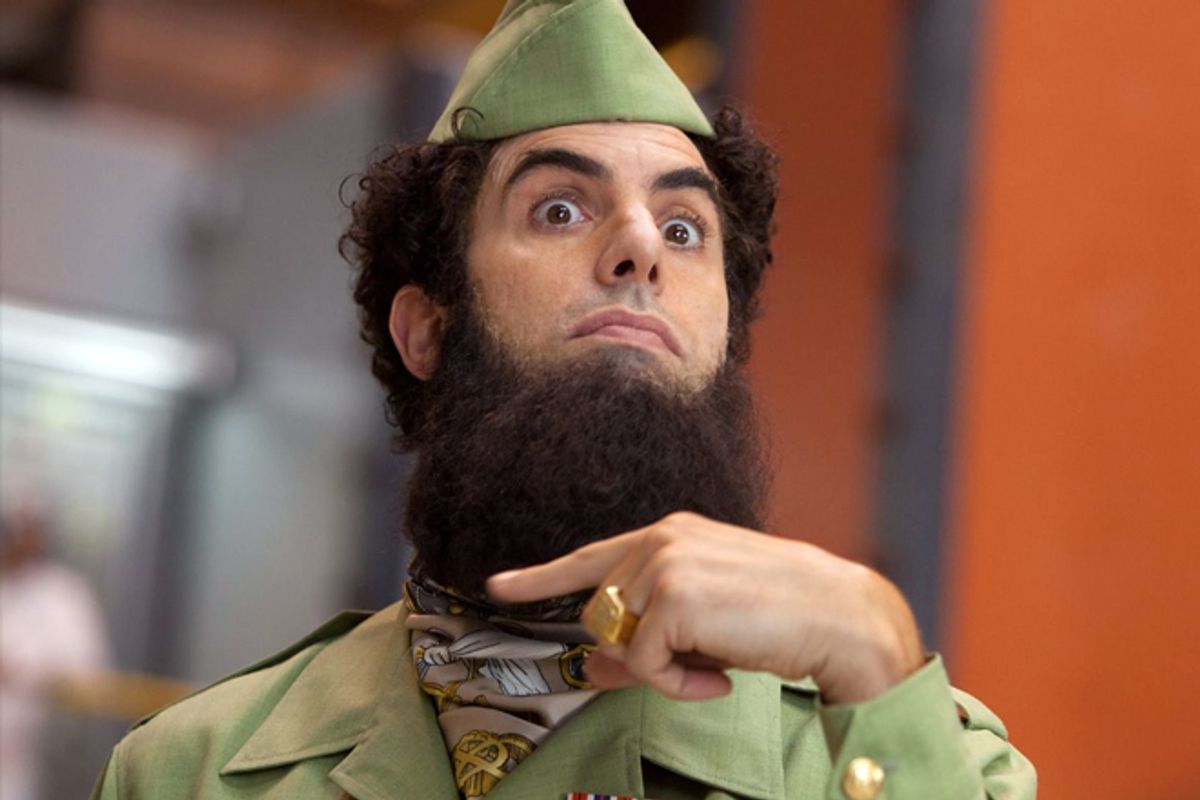 Sacha Baron Cohen in "The Dictator"
--

What exactly is Sacha Baron Cohen up to? This question, stupid as it may appear on the surface, has intrigued me ever since "Da Ali G Show" began airing in the United States. It's a stupid question because Baron Cohen is a comedian; as "edgy" or "controversial" as his topics and material may sometimes be, his job is to make people laugh. But most comedians don't try to get laughs by interviewing Pat Buchanan or Boutros Boutros-Ghali ("Boutros Boutros Boutros-Ghali," as Ali G introduced him) under false pretenses, or by leading a group of unsuspecting Arizona nightclubbers in a rousing chorus of "Throw the Jew Down the Well."

It's an ancient truism of comedy that what makes us most uncomfortable and shocks us the most is also where the deepest veins of humor reside, and throughout his career Baron Cohen has specialized in prodding those sore spots, sometimes with an evident political point of view, and sometimes totally not. In a throwaway moment early in Baron Cohen's new movie, "The Dictator" (directed by Baron Cohen's frequent collaborator Larry Charles, who was also at the helm for "Borat" and "Brüno"), we see the bearded North African tyrant Admiral General Aladeen, portrayed of course by Baron Cohen, playing a first-person-shooter video game called "Munich Olympics." You're groaning already, right? Here's how it works: You knock on the door marked "Israeli Olympic Team." When a cute little Smurf-like creature in a yarmulke and side-curls answers the door -- "Shalom!" -- a pop-up widget announces "Shoot the Jew!" and you waste him. It continues from there: "Oy vey!" "Mazeltov!" "Meshugenah!" cry the cheerfully dying figures.

This is funny precisely because it's not funny, and if that sounds too mystical or dialectical for you, let's remember that we're talking about a guy who has cited World War II-era historian Ian Kershaw, who was one of his professors at Cambridge, as a major influence. "I know it's not very funny being a comedian talking about the Holocaust," Baron Cohen once told Rolling Stone interviewer Neil Strauss, while making it clear that in exposing the casual cruelty and docile conformity of the ordinary people with whom he interacted he was doing exactly that. You can argue there's a personal agenda at work here, since Baron Cohen grew up in a prominent British Jewish family and is the grandson of a Holocaust survivor (in his words, the last Jewish girl trained as a ballerina in Nazi Germany). But I see something more than that, a dark and even misanthropic moral and intellectual vision that conceals, somewhere way deep down, the smothered hope for a better world.

We laugh at the "Munich Olympics" video game (if, indeed, we do laugh) because we're appalled and we see some truth in it. We're appalled that Baron Cohen and his co-writers were malicious enough to come up with it, we're appalled with ourselves for so readily accepting it as humor, and we're appalled by the incontrovertible fact that some people -- in places like Aladeen's fictional homeland, the Republic of Wadiya, but also in Britain and the U.S. and anywhere else you care to mention -- would take smirking delight in such a game if it existed. (Which, for all I know, it may.)

"The Dictator" is a much more normal kind of movie than "Borat" or "Brüno," perhaps because Baron Cohen is now too famous -- and has been threatened too many times with lawsuits and/or beatdowns -- to pull off his in-character performance provocations. (Frankly, hadn't the shtick worn out by the time of the very mixed "Brüno" anyway?) Despite some cleverly snipped bits of real news footage from the Libyan crisis, "The Dictator" is a scripted entertainment from start to finish, with Baron Cohen playing both the vainglorious and idiotic Wadiyan autocrat and also the even dumber rural goatherd selected to serve as his assassination-thwarting double. On a trip to New York to address the United Nations, the real Aladeen gets separated from his entourage, thanks to an incompetent CIA blowhard played by John C. Reilly. Shorn of his beard and of his access to voluptuous hookers and anti-Semitic video games, the erstwhile dictator is forced to work in a feminist food collective in Brooklyn, where he falls hard for Anna Faris, as its unshaven-armpit, pixie-cut sporting, ultra-p.c. manager. (Aladeen repeatedly remarks that she has the physique of a preteen boy -- and specifically of Harry Potter -- but it's not clear whether that's a bad thing.)

Although the character of Aladeen seems awfully predictable by Baron Cohen standards, the movie itself veers from one hilarious, absurd and patently offensive setup to the next, mercilessly mocking the stupidity and paranoia of Americans, the venality of celebrities -- there's a joke about Katy Perry's purported relations with Aladeen that I can't even euphemize successfully -- the Chinese lust for world domination and the cultural vapidity and backwardness of the Arab world. There are moments of unabated vulgar silliness, as when a rich woman gazing out the window of a Manhattan luxury hotel gets an unexpected faceful of wobbly Aladeen dong. And there are even moments when Baron Cohen's portrayal of the benighted dictator -- who is perhaps more ignorant and miseducated than innately evil -- borders on sweetness, if you can really use that word to describe a film that involves jokes about rape, torture, abortion and fellatio performed with a geriatric drug dealer's severed head.

But let's revert to my original WTF question about Baron Cohen by way of this film's obvious relationship to Charlie Chaplin's 1940 "The Great Dictator," which is also about a demented world leader with genocidal fantasies and the ordinary citizen (in Chaplin's film, a Jewish barber) who becomes his accidental replacement. On one level, of course, the comparison is ridiculous. Chaplin's film is a masterpiece, or something close to it -- prescient, daring and almost unbearably tragic, an optimistic and sentimental plea for reason in a world teetering on the edge of the abyss. Remember that when that film was released, the U.S. and Germany were not yet at war and the worst atrocities of the Holocaust had not yet happened, although the film seems to see them coming.

I can't resist feeling that "The Dictator" (whose screenplay is credited to Alec Berg, David Mandel and Jeff Schaffer, along with Baron Cohen) restages Chaplin's great farce in a darker and more vulgar register, to reflect a world that has been fundamentally poisoned, not just by Hitler's crimes but by decades of subsequent mendacity and hypocrisy. I shouldn't spoil Aladeen's climactic speech, in which he praises the many virtues of dictatorship (which the Western world has so foolishly left behind), except to say that it's a brilliant, sardonic response to the paean to progress and democracy delivered by Chaplin's barber in the guise of the dictator Hynkel -- and that its targets are you and me, not the known tyrants and despots of the Arab world. "We are coming into a new world, a kindlier world, where men will rise above their hate, their greed and brutality," Chaplin's character tells the world. There are good reasons to suspect that Baron Cohen, who spent his teen years active in the Zionist-socialist youth organization Habonim Dror (which advocates peace between Israel and its neighbors), is a lefty somewhere deep down. But the new world without hate, greed and brutality -- nuh-uh, he's heard that one before.