Editors knew there was an apparent plagiarist on staff but let him keep writing. An exclusive look inside the paper 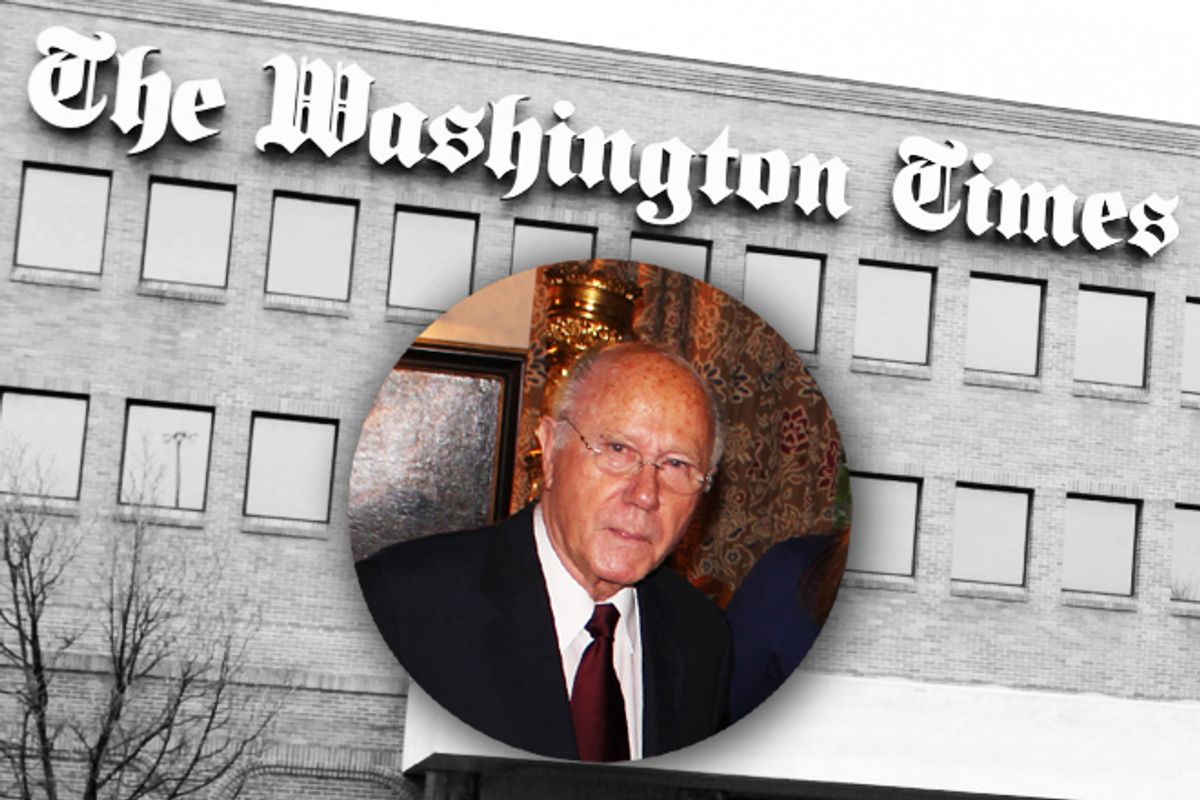 During his long career, Arnaud de Borchgrave, a one-time Newsweek correspondent and editor, has earned his share of laurels. Fellow journalist Theodore H. White has called him one of “America's great foreign correspondents.” “In a job that requires bluff and bravado, he has outrun the best of them," Esquire gushed in a lengthy profile, which is quoted in de Borchgrave’s official bio. Along the way, he has also racked up some fancy titles, including director of the transnational threats project at the Center for Strategic and International Studies.

These days, though, de Borchgrave is involved in some less praiseworthy pursuits. Alongside his other activities, the veteran newsman is a columnist for the Washington Times, the influential conservative broadsheet, where he once served as editor in chief. And in a handful of columns over the last year he has lifted passages verbatim, or nearly verbatim, from the Internet and other sources, without attribution — a fact the Washington Times' leadership tried to sweep under the rug, according to insiders at the paper.

The Washington Post's Erik Wemple first noticed de Borchgrave's apparent plagiarism on Wednesday, but there are plenty more examples. Take, for instance, this bit, which ran in de Borchgrave’s May 9 column:

Under the 10-year agreement, U.S. forces would have access to Afghan bases beyond 2014 for training Afghans and hunting al Qaeda….The administration commits to request Congress each year to help pay for Afghanistan’s security forces, whose costs far outstrip Kabul’s budget….

Under the 10-year agreement, U.S. forces would have access to Afghan bases beyond 2014 for training Afghans and hunting Al Qaeda. The US commits to ask Congress annually to help pay for Afghanistan’s security forces, whose cost outstrips the country’s budget.

Another example can be found in de Borchgrave’s April 25 column, “The Global House of Cards”:

It would take a military jet flying at the speed of sound, reeling out a roll of dollar bills behind it, 14 years before it reeled out one trillion dollar bills. Or, if that's too hard to grasp, one trillion dollars, laid end to end, could make a chain that stretches from Earth to the moon and back -- 200 times.

It appears to be drawn almost word for word from a post that appeared on the conservative blog 100777.com in 2003. (Variations have also appeared elsewhere in the blogosphere.):

If you laid one dollar bills end to end, you could make a chain that stretches from earth to the moon and back again 200 times before you ran out of dollar bills!...It would take a military jet flying at the speed of sound, reeling out a roll of dollar bills behind it, 14 years before it reeled out one trillion dollar bills.

According to four Times officials, who spoke on condition of anonymity, the paper’s management has known about de Borchgrave’s pilfering for months. Editors in the paper's Commentary section, where the octogenarian columnist’s work ran until earlier this year, first stumbled on the problem last July, when de Borchgrave wrote a column about Council on Foreign Relations president Richard N. Haass. It included unattributed passages that were drawn almost word for word from Haass’ writing. At this point, the section's editors decided to give de Borchgrave the benefit of the doubt, in part because of his stature at the paper, and in part because Haass’ words were attributed to him elsewhere in the column. “It was feasible in this situation that he could have accidentally dropped some quote marks,” explains one person familiar with the matter.

Still, they began combing through de Borchgrave’s work for signs of plagiarism. By September, they had turned up another suspect column. Here’s one passage, followed by an excerpt from the online publication Electronic Intifada:

Residents of Khallet Zakariya, located in Area C south of Bethlehem, complained last month to the U.N. Office for the Coordination of Humanitarian Affairs that Israeli authorities are demolishing their homes and settlers destroying their livelihoods in an effort to force the community to relocate.

Residents of Khallet Zakariya, located in Area C south of Bethlehem say Israeli authorities are demolishing their homes and settlers have destroyed their livelihoods in an effort to force the community to relocate.

After this incident, according to two Times officials, the Commentary section editors personally alerted the paper’s president, Tom McDevitt, to the problem. They also confronted de Borchgrave. (De Borchgrave denies his editors ever broached the subject; McDevitt did not respond to calls seeking comment.) Nevertheless, de Borchgrave only grew more brazen. On Jan. 3 of this year, he penned a column on the social media craze. The last two-thirds were made up largely of dubiously attributed quotes and text that had been lifted without attribution. One paragraph was nearly identical to text that had appeared on the website Clickz.com the previous month. Below are the two passages:

Facebook is the global 900-pound gorilla of social media networks. It reaches 55 percent of the world's global audience, accounting for roughly 75 percent of time spent on social networking sites. That's one in every seven minutes spent online all over the world (comScore's 10/11 data indicate).

Facebook remains the global 900-pound gorilla of social media networks. Facebook reached 55 percent of the world's global audience accounting for roughly 75 percent of time spent on social networking sites and one in every seven minutes spent online globally according to comScore's October 2011 data.

5. MyNewsDesk.com - This ‘news exchange’ startup out of Stockholm has become one of the most talked about social media tools of 2011 thanks to its robust analytics system and easy-to-use interface. Try it now if you haven’t already.

4. Wanderfly.com - This is a personalised recommendations engine that helps you discover new and exciting experiences based on your budget and interests. And, it integrates with Facebook to bring all of your social preferences together. This is a great example of niche recommendations portal and what Google+ is aiming to achieve on a wider scale.

2. AppMakr.com - Talk about doing what it says on the tin! AppMakr helps you make free apps for the iPhone. Seriously cool.

1. BufferApp.com - It is now time to crown our most useful tool of 2011. BufferApp works by scheduling content you find online and adding into your Twitter or Facebook stream. It then publishes the tweets at regular intervals without flooding your followers. Pure genius.

5. MyNewsDesk.com -- a "news exchange" startup from Stockholm, Sweden, that advertises, "already one of the most talked about social media tools thanks to its robust analytics system and easy-to-use interface."

4, Wanderfly.com -- "a personalized recommendations engine that helps you discover new and exciting experiences based on your budget and interests. Integrates with Facebook to bring all your social preferences together. Niche recommendations portal is what Google+ is aiming to achieve on a wider scale."

1. BufferApp.com -- self-described as "the most useful tool of 2011, schedules content found on line and adding into your Twitter or Facebook stream. It then publishes the Tweets at regular intervals without flooding your followers. Pure genius!"

While some of the text is in quotes, the only attribution is a vague “as described online.” Another passage, about tech writer Jason Hiner, lifted verbiage from Hiner’s blog, without attribution. Compare this:

In 2011 I went to a strictly vegan diet, dropped 25 pounds, and was surprised to learn how good normal could feel.

In 2011, he went on a strictly vegan diet, dropped 25 pounds and was surprised to learn how good normal could feel.

The Commentary section editors killed the piece, though it ran on United Press International, or UPI, an affiliated wire service. Shortly thereafter, de Borchgrave’s column disappeared from the section all together. Times officials with knowledge of the situation say it was banished by the section’s editors. “One mistake, and you might be able to say, ‘OK, this person had a bad day,’” says a Times staffer with knowledge of the matter. “But the plagiarism in this column was so egregious — frankly, it was breathtaking. It just couldn’t continue.” De Borchgrave maintains, on the other hand, that the gap emerged because he was on book leave, though his weekly columns continued to crop up on UPI — a fact that casts doubt on these claims. He also argues that any overlap between his work and other people’s is modest, and that likening it to plagiarism is “preposterous.” “I’ve been writing for 62 years,” he told Salon. “I’ve won a number of international journalism awards. I don’t think it makes much sense to be challenging me after all these years of reporting and writing.”

As it turns out, de Borchgrave’s hiatus from the Times was short-lived. In late March, his column resurfaced in the paper’s A section, which is normally reserved for news. “The decision-makers basically said, ‘We have a plagiarist here. Are we going to do anything about it? Fuck no!’” recalls one official. “We’ll just move him to another section where the editors won’t make such a fuss.’”

Less than a month later, de Borchgrave was yet again found to be cribbing without attribution. According to four Times officials, Brett Decker, the Commentary editor, wrote a sharply worded email to the executive team, including McDevitt and Ed Kelley, the paper’s top editor. It stressed the gravity of the problem and warned that, by keeping de Borchgrave on, management was jeopardizing the reputation of the paper and its journalists. (Kelley did not return calls seeking comment.) Still, nothing changed. De Borchgrave has held onto his job and continued cribbing copy — just last week he penned the piece with language lifted from the Christian Science Monitor. It was that column and another that caught the Post's attention, but even the embarrassing media coverage hasn’t had much impact. A few hours after the Post piece ran, the Times published yet another de Borchgrave column.