ICE said it would target dangerous immigrants, but it's actually deporting a higher percentage of non-criminals 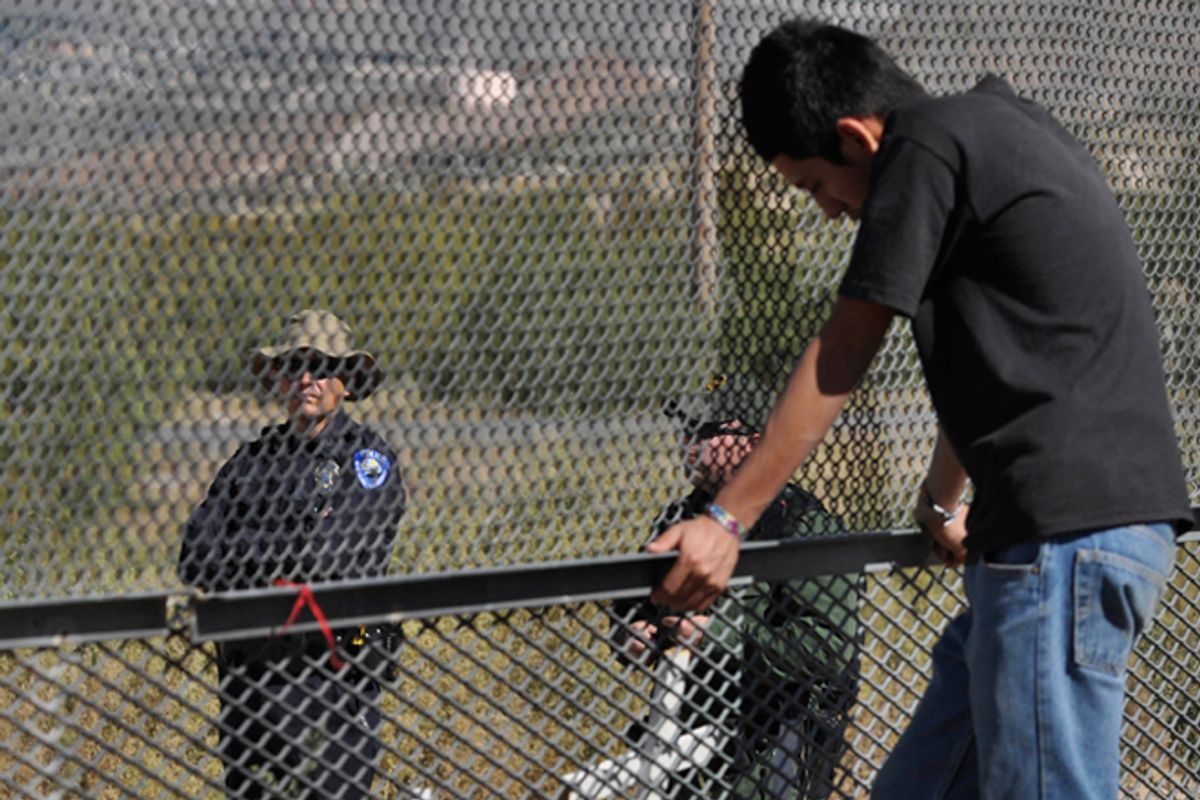 A man in Ciudad Juarez, Mexico, stands next to the border fence as two U.S. law enforcement officers look on from the U.S. side of the fence. (AP/Raymundo Ruiz)
--

The Obama administration claims that it is deporting record numbers of illegal immigrants while focusing on those with criminal records. But new data from Immigration and Customs Enforcement shows that the number of deportation orders has declined dramatically since last summer and non-criminals comprise a growing percentage of those expelled from the country.

That wasn't supposed to happen under a policy of "prosecutorial discretion" announced by ICE director John Morton last June. The goal of the policy, announced with much fanfare in the Spanish language media, was to spare "longtime lawful residents" from deportation and to focus on criminals.

Since then, the adminstration has deported many fewer non-criminal aliens. But non-criminals remain the vast majority of those deported. And those with no criminal record now actually comprise a slightly larger percentage of those forced to leave the country than they did before Morton's announcement.

"The agency continues to be headed in the opposite direction of its stated goals," said Susan Long, co-director of the Transactional Records Access Clearinghouse at Syracuse University, which collected the data from ICE via a Freedom of Information Act request.

The goal of prosecutorial discretion, Long said in a conference call with reporters, "was to target and bring before the court those with more serious criminal history. As yet we're not seeing any change. They have not turned the ship around."

The administration implemented prosecutorial discretion in response to complaints that young people with no criminal records continue to face deportation. But the new data will come as no surprise to student groups such as United We Dream, National Immigrant Youth Alliance and DreamActivist, which continue to highlight the cases of law-abiding young people facing deportation.

Rep. Luis Gutierrez, D-Ill., has championed the case of a South Carolina man, Gabino Sánchez, a married father of two, who was arrested for driving without a license last year and now faces deportation.

"Gabino Sánchez has lived and worked and raised a family here for more than a decade and it is not in anyone's interest to have him deported," Rep. Gutierrez told Fox News Latino on Tuesday after a deportation hearing in North Carolina.  "I do not understand why ICE has not followed President Obama's guidelines and decided to move on from this case to go after someone else, someone who is a threat to his community or a serious criminal."

In response to the TRAC findings, Gutierrez  said, "The president should make sure the Department of Homeland Security is actually following its own rules and he should proclaim proudly and loudly that he will not deport another DREAMer or anyone else who fits the prosecutorial discretion criteria."