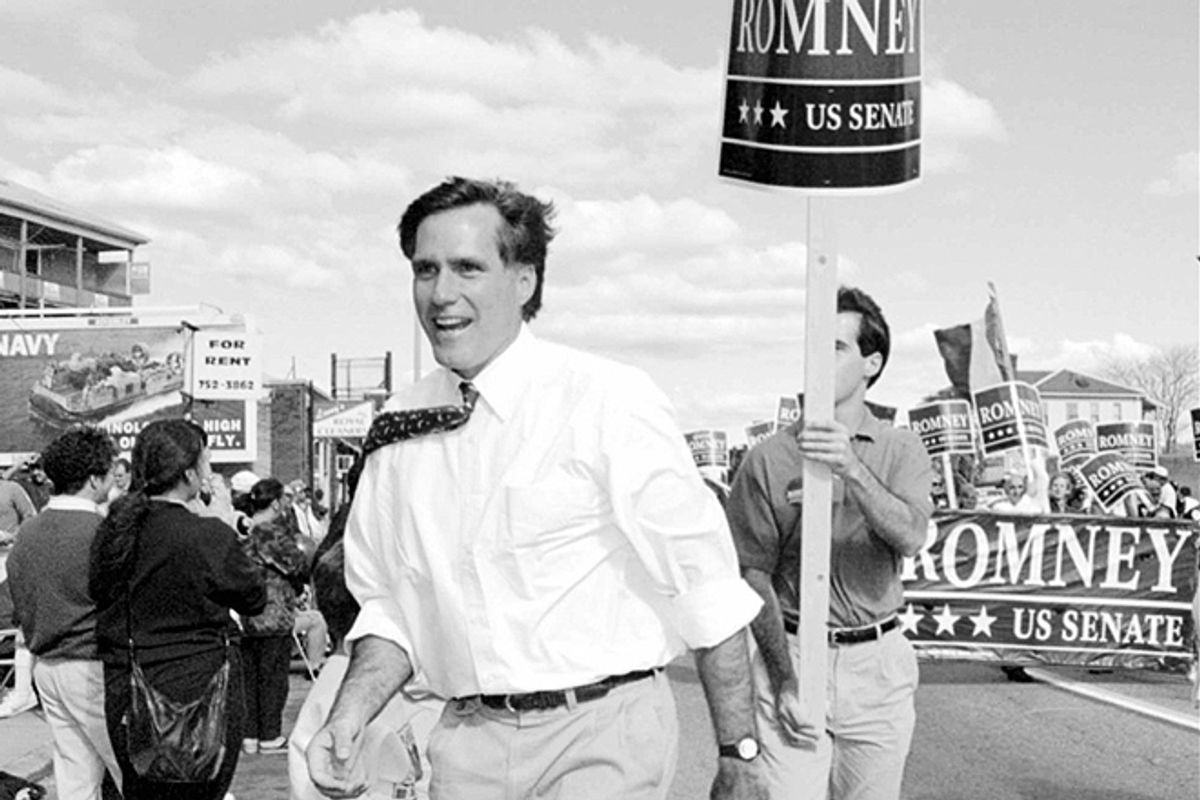 Mitt Romney’s “Bill Clinton strategy” is getting plenty of attention this week, and the idea is simple enough: Make it seem as if President Obama’s policies are so far to the left that they’re outside the mainstream of his own party’s tradition. In a way, it’s a response to Obama’s own use of Ronald Reagan – the conservative president who raised taxes 11 times and denounced debt ceiling brinkmanship -- as a measuring stick for how far to the right this era’s GOP has moved.

But unlike Obama, who was a student and young community organizer during Reagan’s presidency, Romney was a public figure when Clinton was in office, running for the U.S. Senate in the 1994 midterm elections. Which means he actually took positions in real time on some of the key actions that formed the basis for Clinton’s presidential legacy – the legacy he’s now holding up as an example of responsible governance.

Nowhere is this more awkward than on the subject of taxes and deficit reduction. Romney this week wove Clinton into a speech that blasted Obama for kicking up “a prairie fire of debt,” claiming that the current president had “tucked away the Clinton doctrine in his large drawer of discarded ideas.” The problem is that Romney actually ridiculed the Clinton doctrine for reducing the deficit as it was implemented.

Romney and today’s GOP often cite the balanced budgets and surpluses that marked the late years of the 1990s, generally crediting them to what was then a Republican-controlled Congress. They’ll also give Clinton a measure of credit, if only as a backdoor means of slamming Obama, by citing welfare reform or some other compromise he struck with Republicans. But there’s really only one thing that Bill Clinton did to erase the deficit: He raised taxes on the rich – against the wishes of every single Republican in Congress.

Clinton’s 1993 budget, which was enacted as the country was emerging from a recession and confronting leftover deficits from the Reagan years, hiked rates on the top 1.2 percent of income-earners and created a new 39 percent tax bracket. Republicans branded it “the biggest tax increase in world history” and screamed that it would kill millions of jobs and plunge the country back into recession. (For a sense of the hysteria they stirred, just watch the video in this post of Newt Gingrich, John Kasich and other top congressional Republicans at the time.) Attacks on the Clinton tax increase became a major component of the GOP’s 1994 midterm campaign strategy – which is where Romney comes in.

Running against Ted Kennedy in Massachusetts, he embraced the ’93 budget as an issue, playing up the tax increases and claiming that it would do nothing to curb deficits because Democrats had refused to make real cuts in spending. When Clinton came to the state in late October to campaign with Kennedy, Romney held a rally of his own with Bill Weld, then the state’s Republican governor. As the Boston Globe reported it:

As Weld led the cheers of "Go, Mitt, Go," Romney labeled Kennedy and Clinton "the guys who put together the biggest tax increase in the history of the nation" and said they were in Massachusetts "explaining why they need more of your money."

"It's fine for Bill and Ted to have their excellent adventure," Romney said. "But I'd rather be here with Bill Weld showing the voters we care about taxes, about real jobs being created, about being tough on crime and being tough on welfare."

Romney also bought 30 minutes of television time for an infomercial just days before the election. In it, he warned that if Kennedy were to be reelected “the national debt would be pushed even higher.”

But voters reelected Kennedy anyway, by 17 points, and the deficit was gone just a few years later. The Republican warnings about a second recession never materialized, and as the economy picked up strength, the new Clinton tax rates (on top of the hikes that President George H.W. Bush enacted over his own party’s objections in 1990) produced a revenue windfall and the resulting surpluses -- which Romney and Republicans now hail as the work of a Democratic president who, unlike Barack Obama, just didn’t believe in class warfare.