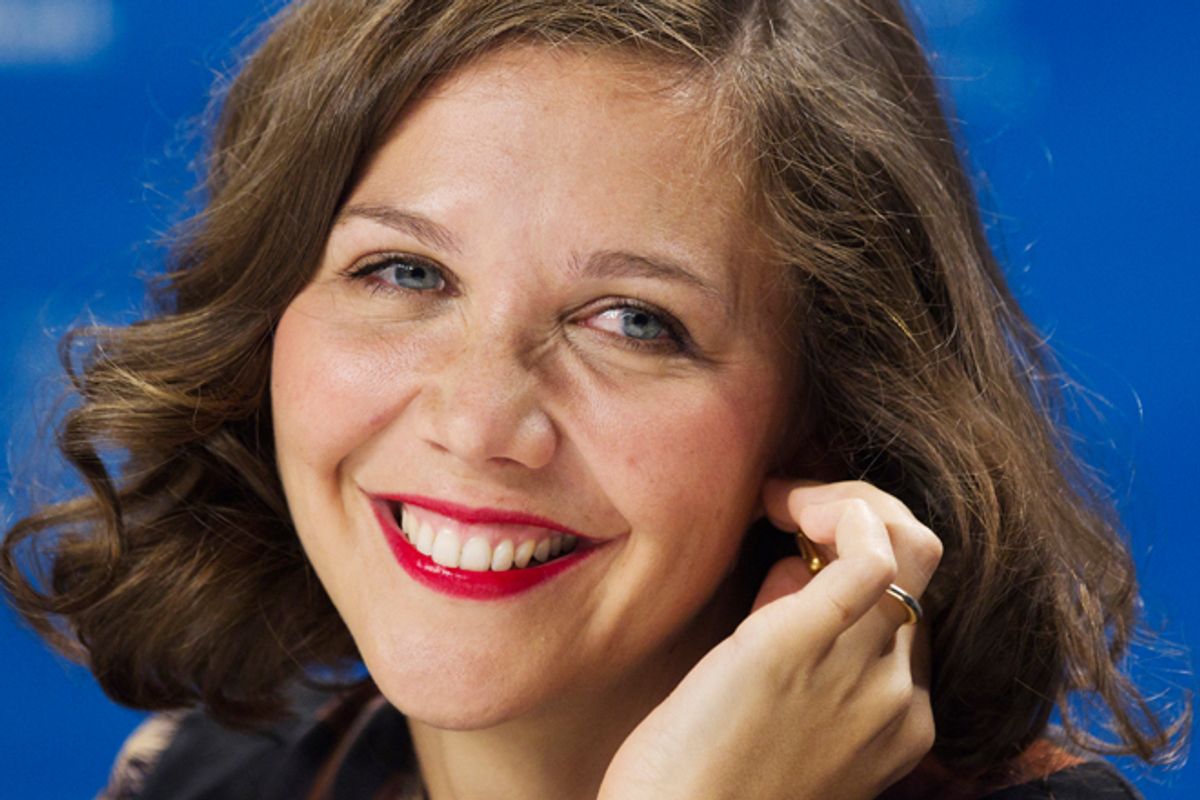 When I met Maggie Gyllenhaal about six weeks ago, she was enormously and gloriously pregnant, stretching out on a sofa with her shoes off and feet up in a Manhattan office building. (Since that time, Gyllenhaal and husband Peter Sarsgaard have welcomed their second daughter, Gloria Ray, to the world.) We were there to talk about "Hysteria," the charming, lightweight feminist farce from director Tanya Wexler that explores a key event in the history of female sexuality: the invention of the vibrator by Mortimer Granville, a Victorian doctor who was seeking to cure the mysterious "female malady" that lends the movie its title.

While I wouldn't assume there's a vast amount of historical and social accuracy to "Hysteria," it's a lot of fun, and could definitely provide a viable moviegoing alternative for adult women eager to move on from "Iron Man" and "Captain America." Gyllenhaal's character, the crusading feminist and social worker Charlotte Dalrymple, who becomes the comic and romantic foil to Hugh Dancy's stuffy, stammering Granville, might be described as a supporting character who takes over the movie. Charlotte effectively becomes the modern viewer's window into the world of "Hysteria," insisting as a matter of course that women indeed enjoy sexual pleasure (but are often plagued with partners who don't know how to deliver it) and espousing then-outrageous views about women's right to vote, go to college, work outside the home and so on.

Although still best known for her roles in independent films like the 2002 spanking-liberation manifesto "Secretary," Spike Jonze's "Adaptation" and the underappreciated "Sherrybaby" (not to mention her early role opposite real-life brother Jake Gyllenhaal in "Donnie Darko"), Gyllenhaal has also appeared in several major Hollywood productions, including "The Dark Knight," "Crazy Heart" and the forthcoming "Won't Back Down," in which she stars with Viola Davis as parents trying to rescue a failing public school. Her prodigious on-screen charm is matched by a reputation as one of the most genuine and easygoing people in the movie business, and although I'd never met her before, this was one of the most relaxed interviews I've ever conducted.

We began our conversation, in fact, by talking about the Park Slope Food Coop, the legendary Brooklyn collective grocery store where we are both members. Unlike some celebrity members I could name, Gyllenhaal and Sarsgaard perform their assigned Coop work shifts personally. (She works in the basement, wearing a kerchief and packing nuts, teas, spices and cheeses, although like any other new mom she now has a one-year work exemption.) Is the Coop's produce both better and cheaper than the pretty but nosebleed-expensive stuff for sale at Manhattan's outdoor markets, we asked each other rhetorically? It is. Then we moved on to "Hysteria."

So it seems like this must have been a fun character to play. You get to be the totally uninhibited character in a movie where everybody else has the 19th century hanging over them. You're the liberated woman at a time when there almost weren't any.

Right. Sometimes, a movie is set up where you're meant to be winning, you know what I mean? I've certainly played a lot of characters who were really flawed and did horrible things, and where the challenge is to ask the audience if they can be compassionate enough to still have empathy for you. That's really important to me, and I think that's a really interesting thing to do with film -- play a character who's really flawed and ask the audience to practice being compassionate. Or who does things that are really outrageous that the audience might have judgments about, and make them question where their judgments come from.

This is completely different. This is like, you walk in and the movie doesn't work if Charlotte isn't winning. But the one thing I really did think -- I mean, the script was so great, and so much of the tone of the movie was in place. I didn't think it needed to be shifted almost at all. But one thing that I think comes from me is that I didn't care at all about her being historically accurate. About her not having the 19th century over her, like you said. I think the movie is served better if she seems wild even now, if she seems so full of life that she could come from any time. Or any planet!

Because what she's talking about in the movie -- the actual politics -- is very simple. The movie doesn't have room for a complicated discussion of socialism. She says, "Socialism is a lot of people working together." Well, you know, I mean -- there's a lot more to say about it! (Laughter.) Or, you know, women should have the right to vote, women should be able to go to college. We're good with that here! So because her politics are so simple, and because the things that were so outrageous that she was saying do not sound outrageous now, she needs to be more outrageous in her spirit. So, yeah, it was fun to be able to just go, "You guys are constricted and constrained by all these things, and I just don't feel them!"

I have to say the question of historical accuracy, or lack thereof, really never bothered me. It's not that kind of movie.

Yeah. I think you're on the wrong track if that's what you're worried about!

But one thing the writers really got right -- or maybe this is your theatrical background and English-lit education at work -- is that Charlotte feels like the heroine of a George Bernard Shaw play that Shaw never got around to writing.

Right! Right! She fits into a history of great wild women, you know? Even, like, '40s women, screwball women, who you love even though they're pissing you off. So, yeah, I agree with that. I liked that about it. I thought it would be fun!

You know, I probably can't push this analysis of your career too far, but you do have a pattern of playing transgressive women, women who are defying social norms. Do you see it that way?

Well, I guess I think -- and this might not be true either -- but if you think about who might be interesting to watch, is it interesting to watch someone who's absolutely following the norm and the pattern you're used to watching? Sometimes people write those characters and they're much more secondary characters meant to give you some exposition or whatever. Usually, the interesting character in a movie is either making a big change or transgressing somehow -- making you think about how you live. So, yes, that is what appeals to me, but I also think it appeals to many people.

But no, I think maybe you're right. When I think about Chekhov's "Three Sisters," for example -- did you happen to see the production that we did last year?

No. I really, really wanted to. I love that play.

Well, so, of the three sisters, the transgressive one is Masha, and that's who I played. But of course Olga is such an interesting character, and she's not really transgressing at all. And in the movie I did after this, which is called "Won't Back Down," I'm also fighting against everything. It's coming out in September, I think. I'm so pregnant! I'm all like, "It's coming out sometime! I'll talk to people about it!" Then there's my character in "Crazy Heart" -- she's transgressive too, in a way. In her heart.

And of course everybody's going to bring up "Secretary," which, although it's quite a different movie from "Hysteria," is also about liberating female sexuality.

Well, yeah. That's why people think about me that way. It's always about what your first big movie is, that anybody knows about. And that movie is about transgression. I mean, that movie is overtly about what it means to transgress, and how it feels, and how you can live as a transgressor. But maybe it's true: I am interested in people who are thinking -- although the girl in "Crazy Heart" definitely isn't thinking, or she wouldn't do a lot of the things she does! I don't know, you probably can't tie them all together.

No, I wasn't arguing that they all fit into that template. I'm always curious about the effect of having appeared in a really big movie. Do people see you on the street now and recognize you just because of "The Dark Knight"?

Some people do, yeah. It's funny, because I've moved back and forth a lot. Even last year, I made "Hysteria" and then I made "Won't Back Down," which is a studio movie. There's such a different feeling in terms of schedule, in terms of time, in terms of subject matter. I used to find it much easier to work on little movies: the pace and the way of working was just better for me. But I think I'm starting to change. I think I work the same way now on a smaller movie as I did on "Won't Back Down." It depends on the style of the movie. It's harder when you're in and out, like on "Dark Knight" or "World Trade Center." I find that difficult. You're not going to work and working for two months, going into the tunnel and just getting in your body who you are.

How has moving into your 30s changed your career? Don't get me wrong, you're still young! I was actually thinking it might have opened up some different possibilities.

Yeah, I actually feel like getting older has opened up a spectrum of roles to me. When I was younger, a lot of the roles that were coming to me were like, especially from a more Hollywood standpoint, the wacky girl. (Laughter.) Now I feel really drawn to playing grown-up women. I'm 34, and maybe it's the way people age now or whatever, but I still feel like some roles I play are not grown-up women and some roles are. In "Won't Back Down" she's a child. In "Hysteria" she's a woman, and in "Crazy Heart" she's kind of half and half. You know, I have one foot in and one foot out. But thank God I'm done with, like, the wacky 25-year-old girl! That never worked that well for me. Plus, it's so interesting to see a crop of really talented new actresses who are in a different generation.

I love Rooney Mara. I was absolutely blown away by her performance in "Girl With the Dragon Tattoo." Absolutely blown away. And to be honest, when you're an actress, you go in and say, "All right -- show me what you can do!" And every turn of that performance was excellent, and not just excellent in the way that some young actors are, where they're just working on instinct and they have no craft. That was a crafted, excellent, beautiful performance. So to root for someone younger, that's new for me. (Laughter.) You know, I'm sort of not in that young group anymore! I'm in another group now, but I like seeing talented young women come along. It's exciting! What are they like? What I loved about Rooney Mara in that movie was that she wasn't asking for anyone to love her. That's hard to do!

"Hysteria" opens this week in New York and Los Angeles, with wider national release to follow.