Executives at Romney's old private-equity firm have donated more to the Democratic Party than the GOP. Why? 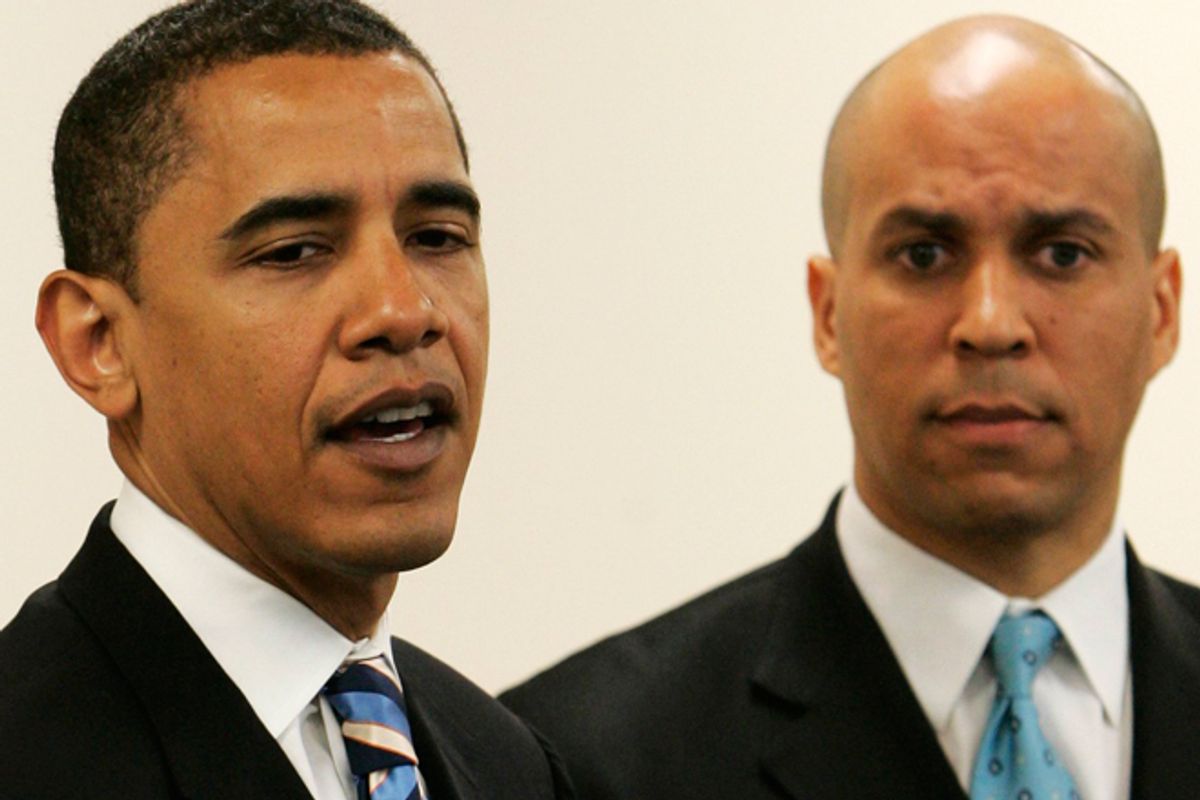 We all know that Bain Capital, Mitt Romney's former firm, is the paragon of capitalist evil, destroying the middle class in order to enrich greedy vulture oligarchs. We also all know that the Democratic Party is the defender of the middle class and the bold adversary of corporate pillaging. That's why these facts generate so much cognitive dissonance:

Democrats have accepted more political donations than Republicans from executives at Bain Capital, complicating the left’s plan to attack Mitt Romney for his record at the private-equity firm.

During the last three election cycles, Bain employees have given Democratic candidates and party committees more than $1.2 million. The vast majority of that sum came from senior executives.

Republican candidates and party committees raised over $480,000 from senior Bain executives during that time period.

While Romney himself has received more contributions from his former firm than Obama has, "President Obama received a sizable share as well." More generally, "campaign finance records show that Democrats collect more money from Wall Street than does the GOP."

The lobbying industry Obama has vowed to constrain is a regular presence at 1600 Pennsylvania Ave. The records also suggest that lobbyists with personal connections to the White House enjoy the easiest access. . . .

The White House visitor records make it clear that Obama’s senior officials are granting that access to some of K Street’s most influential representatives. . . . Lobbyist Marshal Matz, for example, who served as an unpaid adviser to Obama’s 2008 campaign, has been to the White House roughly two dozen times in the past 2 1/2 years. He has brought along the general counsel for the Biotechnology Industry Organization, the chief executive of cereal maker General Mills and pro bono clients, including advocates for farmers in Africa. . . .

Among the lobbyists with close ties to the White House is former New York congressman Tom Downey, who is married to Carol Browner, until last year Obama’s energy czar. Downey is the head of Downey McGrath Group, a lobbying firm whose clients include Time Warner Cable and Herbalife, which sells nutrition and dieting products. He has been to the White House complex for meetings and events 31 times. . . .

On Dec. 10, 2010, Downey held a meeting with economic adviser Lawrence H. Summers and Bill Cheney, the head of the Credit Union National Association, one of Downey McGrath’s clients. John Magill, the top lobbyist for the association, said that the group was pushing to lift the cap on the percentage of assets its members can lend out. The group asked Downey to request the meeting because he is a well-known Democrat.

"Had it been the Bush administration, we probably would have asked one of our Republican consultants to make the call," Magill said. "That’s the way it works."

That is indeed "the way it works" -- as much as ever (the Obama administration agreed to release the visitor logs in order to settle a lawsuit, and it is the first administration to do so). Some of the lobbyists identified by the Post as frequent White House visitors are advocating for liberal causes rather than corporate interests, but many are simply there to shill for the industries that pay them to peddle their influence.

Yesterday, Newark Mayor Cory Booker went on Meet the Press and angered hordes of Democrats when he condemned the Obama campaign's attacks on Bain as "nauseating," equated the anti-Bain messaging to the GOP's sleazy use of Jeremiah Wright, and then demanded: "stop the attacks on private equity" (in response to the backlash, Booker then released a hostage-like video recanting his criticisms and pledging his loyalty to President Obama). But as my Salon colleague Steve Kornacki noted, this was not some aberrational outburst from Booker; to the contrary, as Mayor of Newark, home to numerous Wall Street executives and firms, "financial support from Wall Street and, more broadly speaking, the investor class has been key to Booker’s rise, and remains key to his future dreams."

But there's nothing unique in that regard about Booker, who has long been regarded as a rising star in the Party. The same can be said of the Democratic Party generally. There was more or less a conscious decision in the early 1990s that the Party would transform itself into a servant of Wall Street and corporatism. It became the party of Robert Rubin and Larry Summers as it presided over massive de-regulation of the financial industry. And in response, the corporate money poured into the Party's coffers and hasn't stopped pouring in. Recall this December, 2008 New York Times article on key Party fundraiser Chuck Schumer -- entitled "A Champion of Wall Street Reaps Benefits" -- detailing the New York Senator's loyalty to the banking industry and how crucial it has been in building and sustaining Democratic Party power in Washington:

As the financial crisis jolted the nation in September, Senator Charles E. Schumer was consumed. He traded telephone calls with bankers, then became one of the first officials to promote a Wall Street bailout. . . .

The next day, Mr. Schumer appeared at a breakfast fund-raiser in Midtown Manhattan for Senate Democrats. Addressing Henry R. Kravis, the buyout billionaire, and about 20 other finance industry executives . . . “We are not going to be a bunch of crazy, anti-business liberals,” one executive said, summarizing Mr. Schumer’s remarks.

The message clearly resonated. The next week, executives at firms represented at the breakfast sent in more than $135,000 in campaign donations. . .

As a result, he has collected over his career more in campaign contributions from the securities and investment industry than any of his peers in Congress, with the exception of Senator John F. Kerry of Massachusetts, the Democratic nominee for president in 2004, according to the Center for Responsive Politics, which analyzed federal data. (By 2005, Mr. Schumer had so much cash in reserve that he shut down his fund-raising efforts.)

In the last two-year election cycle, he helped raise more than $120 million for the Democrats’ Senate campaign committee, drawing nearly four times as much money from Wall Street as the National Republican Senatorial Committee. Donors often mention his “pro-business message” and record of addressing their concerns. John A. Kanas, the former chief executive of North Fork Bank, said: “He would solicit my opinion, listen to my advice and he appeared to take it into consideration.”

Lee A. Pickard, a lawyer representing clients including the Bank of New York, whose employees have been significant donors to Mr. Schumer and other Senate Democrats, turned to Mr. Schumer last year to successfully beat back a regulatory initiative by the Securities and Exchange Commission. “If you get Chuck Schumer on your side, you are O.K.,” he said.

And then there's the always-annoying fact that Wall Street poured far more of its money into President Obama's 2008 campaign than it did into John McCain's, then placed large numbers of its former lobbyists and officials in key administration positions beyond just Summers and Tim Geithner, then received full-scale protection for the crimes leading to the 2008 financial crisis. Thus far, the banking industry -- angered by Obama's tepid anti-oligarch rhetoric and symbolic Election Year populist proposals, and excited to elect one of their own -- has donated substantially more to Romney than Obama. It remains to be seen if that trend continues, but whatever else is true, the Democratic Party has been the recipient of ample amounts of Wall Street largesse for two decades now, and with good reason.

Romney's record at Bain, like everything else about a presidential candidate, deserves real scrutiny, and the private equity and hedge fund conduct that made him rich has indeed played a substantial role in exploding levels of income inequality and the relentless assault on basic middle class security. But the Democratic Party has been nothing close to a force standing in opposition to any of that. They've been, and continue to be, enthusiastically along for the ride. Despite the industry's petulant anger, Wall Street has thrived under the Obama administration, and even in those areas where the White House had full authority and the ability to help ordinary Americans -- such as the HAMP fund to aid defaulting homeowners -- they displayed overwhelming indifference. Not only did President Obama propose large cuts to Social Security and Medicare, he has been assuring Washington insiders such as GOP Sen. Tom Coburn that he intends even larger ones if re-elected:

If President Obama is president again, those problems are still there and we have to solve them. He knows that. We’ve had conversations where he’s told me he’ll go much further than anyone believes he’ll go to solve the entitlement problem if he can get the compromise. And I believe him. I believe he would.

In sum, as is typically true, there is a huge gap between tactical Election Year rhetorical posturing and the reality of whose interests the two parties are serving.

UPDATE: Here are the all-time leaders in receiving campaign contributions from the securities and investment industry, including the employees of organizations within the industry, their family members, and their political action committees, through the end of 2011 (h/t Vox Vocis res Publica):

In The Audacity of Hope, President Obama himself explained why this matters (h/t The Ox):

Increasingly I found myself spending time with people of means – law firm partners and investment bankers, hedge fund managers and venture capitalists. ... As a rule, they were smart, interesting people, knowledgeable about public policy, liberal in their politics, expecting nothing more than a hearing of their opinions in exchange for their checks. But they reflected, almost uniformly, the perspectives of their class: the top 1 percent or so of the income scale that can afford to write a $2,000 check to a political candidate. ... They had no patience with protectionism, found unions troublesome, and were not particularly sympathetic to those whose lives were upended by the movements of global capital. ... I know that as a consequence of my fundraising I became more like the wealthy donors I met.

Romney spent much of his professional adult life on Wall Street, but in a different though real sense, as Obama himself recounted, so has the President. That chart above cannot be dismissed as meaningless.