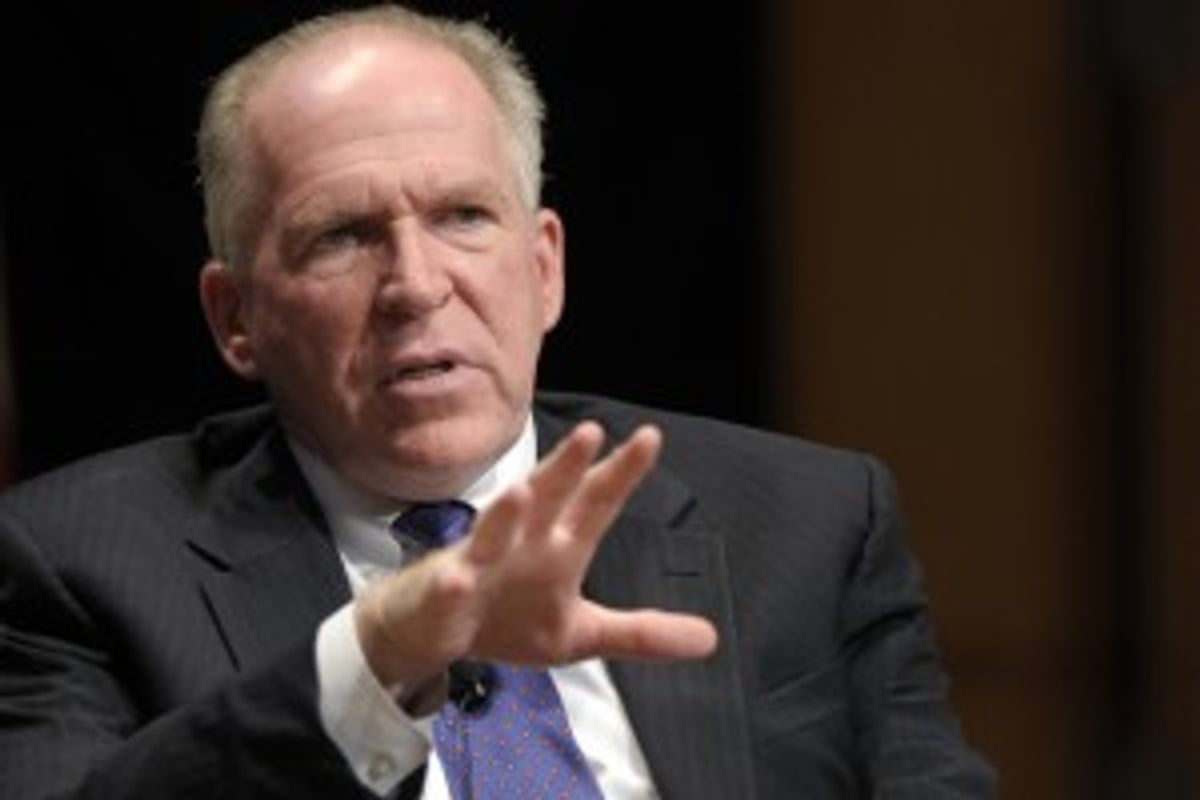 In November, 2008, media reports strongly suggested that President Obama intended to name John Brennan as CIA Director. But controversy over Brennan's recent history -- he was a Bush-era CIA official who expressly advocated "enhanced interrogation techniques" and rendition -- forced him to "withdraw" from consideration, as he publicly issued a letter citing "strong criticism in some quarters" of his CIA advocacy.

Undeterred by any of that unpleasantness, President Obama instead named Brennan to be his chief counter-Terrorism adviser, a position with arguably more influence that he would have had as CIA chief. Since then, Brennan has been caught peddling serious falsehoods in highly consequential cases, including falsely telling the world that Osama bin Laden "engaged in a firefight" with U.S. forces entering his house and "used his wife as a human shield," and then outright lying when he claimed about the prior year of drone attacks in Pakistan: "there hasn’t been a single collateral death." Given his history, it is unsurprising that Brennan has been at the heart of many of the administration's most radical acts, including claiming the power to target American citizens for assassination-by-CIA without due process and the more general policy of secretly targeting people for death by drone.

Now, Brennan's power has increased even more: he's on his way to becoming the sole arbiter of life and death, the unchecked judge, jury and executioner of whomever he wants dead (of course, when Associated Press in this report uses the words "Terrorist" or "al-Qaida operative," what they actually mean is: a person accused by the U.S. Government, with no due process, of involvement in Terrorism):

White House counterterror chief John Brennan has seized the lead in choosing which terrorists will be targeted for drone attacks or raids, establishing a new procedure for both military and CIA targets.

The effort concentrates power over the use of lethal U.S. force outside war zones within one small team at the White House.

The process, which is about a month old, means Brennan's staff consults with the State Department and other agencies as to who should go on the target list, making the Pentagon's role less relevant, according to two current and three former U.S. officials aware of the evolution in how the government goes after terrorists. . . .

Brennan's effort gives him greater input earlier in the process, before making final recommendation to President Barack Obama. Officials outside the White House expressed concern that drawing more of the decision-making process to Brennan's office could turn it into a pseudo military headquarters, entrusting the fate of al-Qaida targets to a small number of senior officials. . . .

Some of the officials carrying out the policy are equally leery of "how easy it has become to kill someone," one said. The U.S. is targeting al-Qaida operatives for reasons such as being heard in an intercepted conversation plotting to attack a U.S. ambassador overseas, the official said. . . .

Human rights and civil liberties groups have argued for the White House to make public the legal process by which names end up on the targeting lists.

"We continue to believe, based on the information available, that the (drone) program itself is not just unlawful but dangerous," said Hina Shamsi, director of the ACLU National Security Project. "It is dangerous to characterize the entire planet as a battlefield."

"As a general principle, if people think someone is checking their work, they are more careful," Eoyang said. "Small groups can fall victim to group-think."

Needless to say, all of this takes place in total secrecy, with no legal framework and no oversight of any kind. Indeed, even after they had Brennan publicly defend the CIA drone program, the Obama administration continue to insist in federal court that the program is too secretive even to confirm its existence. It's just a tiny cadre of National Security State officials who decide, in the dark, whom they want dead, and then -- once the President signs off -- it is done. This is the Change with which the 2009 Nobel Peace Prize laureate has gifted us: "some of the officials carrying out the policy are equally leery of 'how easy it has become to kill someone.'"

Reuters previously described the secret process used to determine which human beings, including American citizens, would be targeted for due-process-free death-by-CIA: they "are placed on a kill or capture list by a secretive panel of senior government officials" with "no public record" nor "any law establishing its existence or setting out the rules" -- an actual death panel, though one invented by the White House rather than established by law. And now John Brennan has even more control over the process, and fewer checks, when issuing these death sentence decrees.

Remember in the Bush era when little things like the Patriot Act and warrantless eavesdropping and military commissions were the Radical and Lawless Assaults Trampling on Our Constitution and Our Values? Now, all those things are completely normalized -- controversies over those policies are like quaint and obsolete relics of a more innocent era -- and we now have things like unelected Death Sentence Czars instead.

Charles Davis has two good posts -- one here and one here -- on the desperate mental gymnastics invoked by some Obama fanatics to justify (and, when that fails, ignore) all of this.

UPDATE: I was on Al Jazeera yesterday debating the potential de-listing of the MeK as a Terrorist group, and that can be seen here (because of technical issues, my participation began at 19:40). I was also interviewed yesterday by Anti War Radio about Obama's detention policies and the recent court case invalidating the NDAA's detention powers, and that can be heard here.