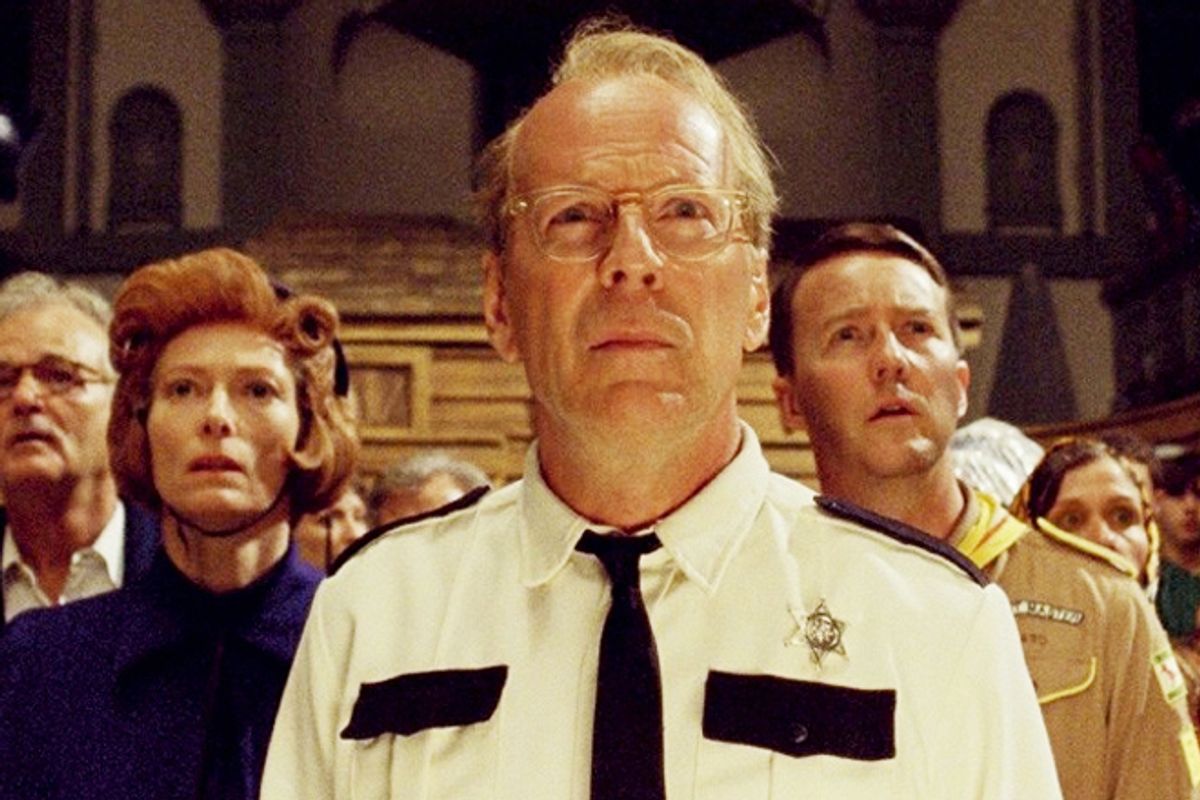 All the details of Wes Anderson's rapturous and hilarious mid-1960s New England summer romance "Moonrise Kingdom," taken one at a time, are plausible. Indeed they are more than plausible; they're perfect, from the fitted uniforms and yellow canvas tents of the troop of "Khaki Scouts" headed by cigarette-smoking Edward Norton to the achingly picturesque island home where the brood of children belonging to Bill Murray and Frances McDormand sit around listening to the Leonard Bernstein recording of "A Young Person's Guide to the Orchestra." (I'm not going to bother questioning whether that record existed in 1965; some production intern probably spent half a day tracking down its history.)

Yet, as usual with an Anderson movie, this meticulous and convincing detail does not add up to realism but -- depending on your perspective -- to something either much less or much more than that. Something that could be described, and has been, in all kinds of ways: As fantasy or fairytale; as a whimsical miniature under glass; as a diorama created by a brilliant, obsessive-compulsive child. All reasonable descriptions, at least up to a point -- and I'm on board for all of it. I've pretty much been on Anderson's wavelength from Day One -- or at least from "Rushmore," which isn't quite Day One. That's not the same thing as saying that I think all his movies work equally well, or that he doesn't occasionally lapse into laziness or self-indulgence. (I'll have to give "The Life Aquatic with Steve Zissou" another chance one of these days, but I feel pretty confident that was a misstep.)

I understand why Anderson's films drive some viewers nuts, in fact, and I would simply respond that it should be clear by now that his vision of cinema and the world is idiosyncratic and not to everyone's taste and that there's no point sitting around hoping he'll become more normal. But here's what I reject completely: The idea that the artificiality or hyperrealism (a better word, I think) of Anderson's worlds -- which is admittedly cranked up pretty high here -- is fundamentally pretentious and insincere, or that it reflects some kind of "kidult" refusal of grown-up emotion. Yes, Anderson's principal subject, and arguably his only subject, is the collision between the emotional lives of adults and children and the paradoxical tragicomedy it can so often produce. But if Anderson's adults yearn for the comparative simplicity of childhood while his children long for the big, important feelings they believe (wrongly) go with growing up, that in itself is a distinctly adult perspective.

"Moonrise Kingdom" takes place at the tail-end of summer -- that season which is more charged with a rueful sense of passage than any other. Its preteen lovers, Sam and Suzy (played by newcomers Jared Gilman and Kara Hayward, respectively), most certainly aspire to the grand passions of Tristan and Isolde or Abelard and Heloise, and it's entirely possible they've heard of them. They first met backstage during a performance of Britten's "Noye's Fludde" at the island of New Penzance's only church, when Sam was in his Khaki Scout uniform and coonskin cap, and Suzy was wearing a bird costume. (The use of Britten, of all possible composers, as this film's musical muse is wonderfully unlikely, and totally Andersonian.) After a hot and heavy epistolary romance, they conspire to run away together -- as it happens (so we are told by on-screen narrator Bob Balaban), just three days before a major hurricane will hit New Penzance.

As irresistible as our young lovers are -- Sam with his corncob pipe and camp-tested scouting skills, Suzy in her saddle shoes and with her dangerous pre-Lolita sexuality -- this isn't a movie about kids, and they are Potemkin protagonists. Against the certainty and clarity of the childhood world, we see the real heroes of New Penzance: Norton's upright Scout Master Ward, who confesses his secret fears to a reel-to-reel tape recorder in the depths of the night; Bruce Willis's Captain Sharp, the island's only cop, who's in love with Kara's artsy, bespectacled mother, Laura (McDormand); Murray as the gentle, lawyerly Walt (Laura's husband and Kara's dad), who knows he is being cuckolded but can't quite bring himself to do anything about it. All these lonely people are portrayed with wonderful delicacy and sensitivity, right in the middle of an artificial construction that contains plenty of shtick. I honestly don't think I've ever seen Norton and Willis, in particular, be better than they are here.

Sam and Suzy's tempestuous love affair, along with that looming act of God that's boiling up out there in the Atlantic, will not merely bring all these people together but will give them an excuse to escape their everyday routine and their ingrained fears. In that sense, and in others too, "Moonrise Kingdom" is a deeply romantic film, perhaps the sweetest and most compassionate Anderson has ever made. What has evidently confused some viewers is the fact that it's also an obsessively curated re-creation of an era that never quite existed, a meticulous storybook version of 1965 that's more perfect than the original. In real life, Boy Scout tents of that era were made of canvas but were never yellow, and government social workers never wore Salvation Army-style uniforms, as Tilda Swinton's officious character (whose only name appears to be "Social Services") does here. And so on.

I suspect that people conflate the artificiality of Anderson's movies with inauthenticity or insincerity (different things, to be sure) because his artificiality is obvious and worn on the surface, whereas the highly mannered films of, say, Martin Scorsese masquerade as realism. I'm not picking that example at random, by the way; Scorsese has identified Anderson as his favorite among younger American directors, I suspect because he sees a kindred spirit. The two men have very different aesthetics, but both are visionaries who see the world through a personal lens, and both are technical virtuosi concerned with managing every detail of their created universes. You're free to prefer one director's work to the other's, of course, but "Raging Bull" and "Goodfellas" are every bit as obsessed with style and production design as any Anderson film. (The cinematography in "Moonrise Kingdom" is by Robert D. Yeoman, who has shot all of Anderson's live-action films. The production designer is Adam Stockhausen, the art director is Gerald Sullivan and the spectacular costumes are by Kasia Walicka-Maimone.)

To the extent that "Moonrise Kingdom" can be described as nostalgia, it isn't personal nostalgia, since Anderson himself was not born until 1969. Very likely it's an attempt to create a fantasy version of the lost world of his own parents. I wonder whether Scout Master Ward, when the magical summer of '65 fades into memory, will get married, move to Texas and have a son. The island cabin of Walt and Laura feels like a creation out of a classic children's novel, but it is imbued with the sadness of a failing adult marriage. In the third act, it feels like Anderson and co-writer Roman Coppola get a little lost in plot shenanigans, and they introduce several extra characters (Jason Schwartzman, Harvey Keitel and Swinton all show up in small roles) to little effect. But all of "Moonrise Kingdom" -- from Sam's miniature stolen canoe to the Benjamin Britten excerpts to Captain Sharp's heartbreaking bachelor trailer home -- is a labor of love, as pure and sweet as the lovelorn letters of its young runaways. Wes Anderson can fool some people, maybe, but he's not fooling me.

"Moonrise Kingdom" opens this week in New York and Los Angeles, with wider release to follow.