No Child Left Behind has unleashed a nationwide epidemic of cheating. Will education reformers wake up? 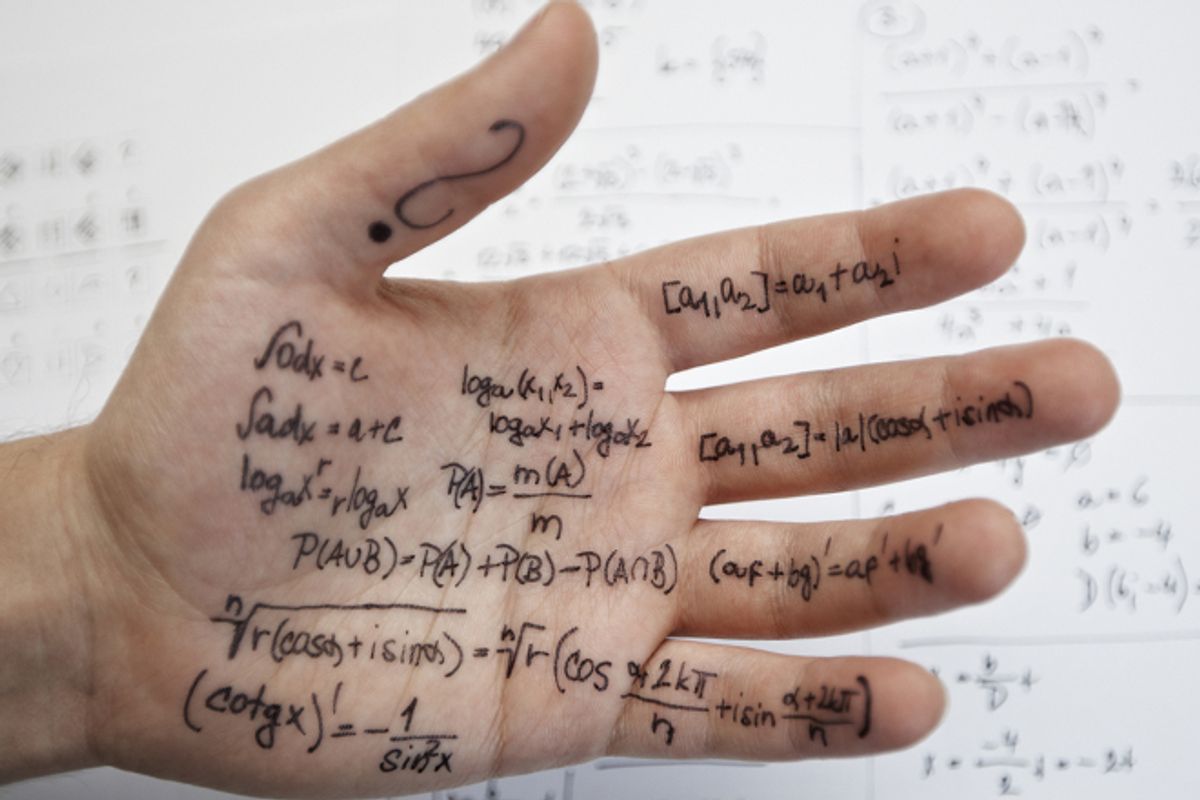 On Thursday, Mitt Romney made a visit to a West Philadelphia charter school to tout his education platform, which, as it happens, looks pretty similar to President Obama's: more privately managed schools and a reliance on high-stakes standardized tests to evaluate teachers.

But on the 10-year anniversary of No Child Left Behind, the school-reform movement that both candidates have embraced is in crisis. Rampant and widespread cheating on high-stakes standardized tests has been uncovered in districts nationwide. The first big scandal erupted in Atlanta, where teachers and administrators are suspected of erasing wrong answers and filling in correct ones, or simply giving students the right answers, at nearly half of city schools. In Philadelphia, one in five district schools is now under investigation, including 11 of the city's top-tier Vanguard Schools. Cheating or score inflation is suspected in cities including Houston, New York, Detroit and Washington, D.C.

How did cheating become normal in America’s schools?

Test results have been used as the pretext to fire teachers and force schools into becoming privately managed charters, even though research has shown that corruption-prone charters are not, as a whole, better, and are often much worse than traditional public schools. And the testing mandates have proven to be a bonanza for for-profit education companies like Pearson and Kaplan (the latter is owned by the Washington Post Co.), which produce tests and materials to drill students in preparation.

And the pressure to raise scores continues to build. NCLB requires districts to achieve the impossible goal of demonstrating that all students are proficient in reading and math by 2014. Unsurprisingly, school districts nationwide are set to fail this mandate. The Obama administration, meanwhile, isn’t offering much of a helping hand. Its Race to the Top initiative uses billions in federal dollars to encourage states to incorporate “student achievement” in evaluating teacher quality. And Obama has conditioned waivers for NCLB's 2014 deadline on implementing more Race to the Top reforms — such as removing barriers to charter school growth and, once again, evaluating teachers based on student test scores.

This year alone, Washington, Colorado and Connecticut have passed laws requiring the inclusion of standardized test scores in teacher evaluations. In March, New York legislators acceded to Gov. Andrew Cuomo's proposal to base 40 percent of a teacher evaluation on “student achievement.”

In Los Angeles, one well-regarded teacher at a low-income school committed suicide after the Los Angles Times posted his low “value-added” score online. The New York Times, though it faced widespread criticism and acknowledged the data's shortcomings, followed suit in February and published individual teacher test score data online. The New York Post, for its part, did what could be expected and personally attacked one teacher, by name and photo, as “The Worst Teacher in the City.”

In Washington, USA Today uncovered possible widespread cheating that took place during Rhee's tenure. Rhee, who basked in the klieg light glow of the docu-propaganda film “Waiting for Superman” and invited PBS NewsHour to tape her while she fired a principal, has refused to speak to its reporters.

According to New York Times education columnist Michael Winerip, Washington's investigation has been a superficial one: “Investigators spent five days at eight schools.” In Atlanta, the nation's canary in the test-cheating gold mine, “the state deployed 60 investigators who worked for 10 months at 56 schools.”

Indeed. The full extent of cheating nationwide is hard to gauge. In both Atlanta and Philadelphia, it was aggressive reporting and not government oversight that brought bubble-test malfeasance to light. There is often little government regulation at the state or school district level. And the federal government, for its part, requires testing but does not require any oversight to identify cheating.

The recent spate of scandals began in 2008 when the Atlanta Journal Constitution uncovered suspicious, and nearly statistically impossible, levels of improvement at a few Georgia schools. In 2010, Gov. Sonny Perdue finally ordered an in-depth investigation: Cheating was alleged at nearly half of Atlanta's schools.

The Philadelphia Inquirer first uncovered potential cheating at Roosevelt Middle School in May 2011. One month later, the Philadelphia Public School Notebook discovered a 2009 state study suggesting that cheating could be far more widespread: 89 schools statewide, including 28 in Philly, had been identified for suspicious test scores. More schools have since been identified.

In March, the Journal Constitution went on to expose cheating nationwide in a stinging, in-depth  investigation: About 200 school districts, it discovered, have “test scores ... [that] resemble those that entangled Atlanta in the biggest cheating scandal in American history.”

Cheating was concentrated in urban and rural districts, which tend to educate a high number of poor students.

“A tainted and largely unpoliced universe of untrustworthy test results underlies bold changes in education policy,” they found. “Some school districts and states have taken an apathetic, if not defiant, stance in the face of cheating accusations in recent years.”

Poverty and the underfunding of poor schools are the greatest obstacles to academic achievement. No Child Left Behind, while doing nothing to alleviate poverty and too little to direct extra funding to poor districts, put these systems under the heaviest pressure to show testing gains.

“Never before have so many had so much reason to cheat,” writes Winerip.

Likewise, (almost) never before have so many private interests had so much opportunity to profit. Testing has — much like privately managed charters (and certainly cyber charters such as the one owned by Mike Milken), vouchers and myriad unproven but expensive “learning technologies” that have proliferated over the past decade — alchemized an enormous pile of taxpayer dollars into generous contracts with private education firms that produce tests and prep students.

The profiteering from the high-stakes test regime is, it seems, also tinged with corruption: corporate education behemoth Pearson, Winerip has reported, pays for public school officials nationwide to attend lavish conferences in Helsinki or Rio de Janeiro, “meeting with educators in these places” and “with top executives from the commercial side of Pearson, which is one of the biggest education companies in the world, selling standardized tests, packaged curriculums and Prentice Hall textbooks.”

Testing companies even make money from trying to make sure that no one cheats on their tests: New York state has a $3.7 million contract with Pearson to examine test results for irregularities.

These local scandals are fueling a national movement to overturn the high-stakes testing regime, as the Wall Street Journal reported last week. Four hundred Texas school boards adopted a resolution asking the state to deemphasize testing and 500 Everett, Wash.,  students refused to take state exams in protest. And in the nation's largest protest against corporate education reform, thousands in Philadelphia are protesting a plan to close schools and privatize management of those that remain open in the cash-strapped district. Groups nationwide, including the NAACP Legal Defense and Educational Fund and National Education Association, have signed a resolution calling on Congress to reduce No Child Left Behind's testing mandates.

Prophets of accountability, however, have so far blamed unethical educators and proposed technocratic solutions rather than taking on NCLB.

U.S. Secretary of Education Arne Duncan, who demands testing gains but not testing oversight, told the Journal Constitution that the “findings are concerning.” He was, however, oblivious to the investigation's indictment of the high-stakes test regime.

In New York, the New York Board of Regents in September 2011 recognized that schools rely “more than ever on state exams – to measure student achievement, to evaluate teacher and principal effectiveness, and to hold schools and districts accountable for their performance,” and so “we need to be absolutely certain that our system is beyond reproach.”

Their bold solutions? Universal exam dates for grades 3-8 and a requirement that “all teachers and administrators certify that they have received and will follow all security protocols.”

High-stakes testing imperils far more than educators' ethical integrity. The pressure to do well on standardized tests has also eviscerated the curriculum, as I reported for Salon last fall: Arts, science, music, physical education, literature and even recess are on the chopping block as teachers are forced to spend an ever greater amount of time on test preparation. This degrades classroom learning — and, once again, the fundamental value and accuracy of the test.

“There was once a time,” says Ravitch, “when test prep was considered a form of cheating.”

The test lobby has also monopolized the national conversation about public education for the past decade, successfully changing the subject from what research demonstrates to be two central causes of poor students' poor academic performance: the systematic underfunding of poor and property-tax reliant school districts and, of course, poverty. It's now more clear than ever that the high-stakes standardized testing regime cheats our children in more ways than one.