Why Etan Patz still haunts us

Three decades after his disappearance, as the case is finally solved, a missing child remains our worst nightmare 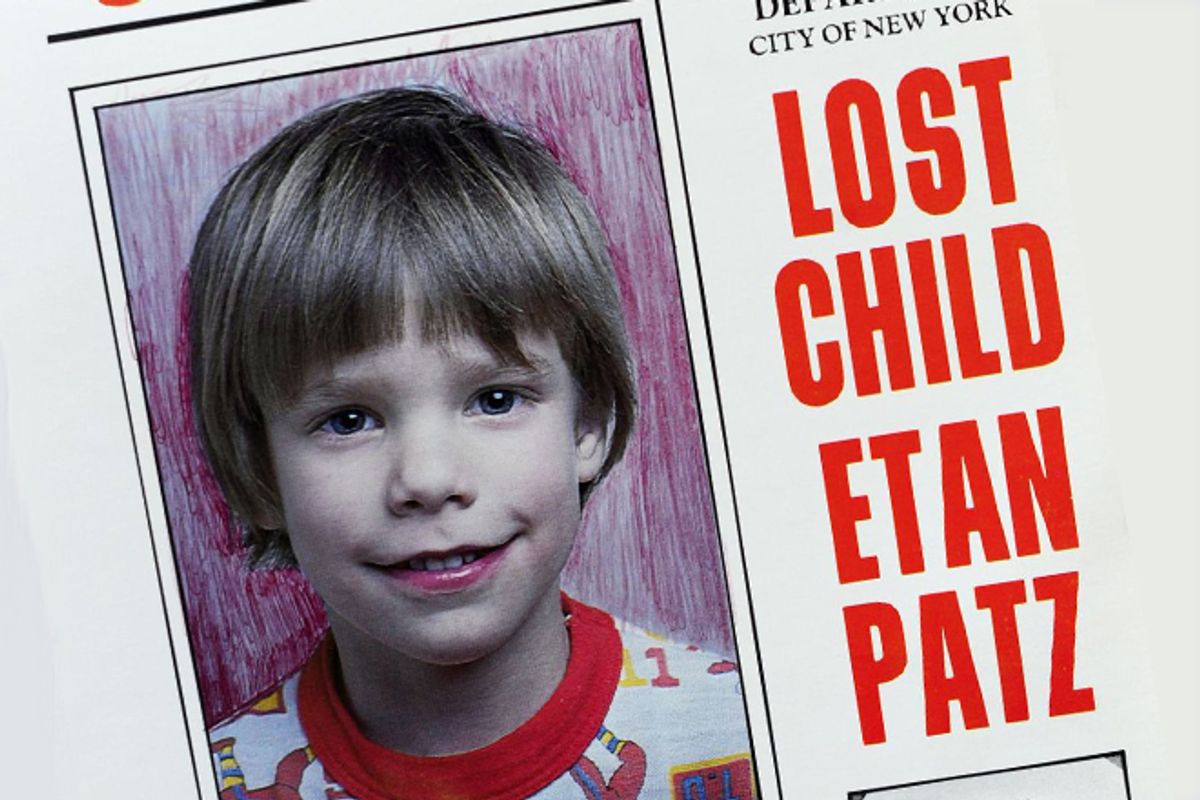 It was 33 years ago today that Etan Patz left his home in New York's SoHo neighborhood to walk to his school bus. He was never seen again, and was declared dead in 2001. Two years ago, his case was reopened. And on Thursday, with little physical evidence to corroborate, police commissioner Ray Kelly announced that Pedro Hernandez had confessed and was being charged with the child's murder.

There were other stories of children who'd gone missing before Etan Patz. Sometimes even sensational cases. But this one was different. He wasn't a famous person's son, like Charles Augustus Lindbergh Jr. He was just a kid doing what kids did back then. Roaming freely on his street. And unlike the nearly 30 children who disappeared and were murdered during the same period in Atlanta, Patz had a father who is a photographer. Overnight, New York City was plastered with images of his sweet-faced little boy under the chilling word "Missing." Eventually that face became the first to appear on a milk carton.

Two years later, when 6-year-old Adam Walsh was abducted and murdered in Florida, it seemed that children were disappearing everywhere. And with them, childhood itself. Walsh's father, John Walsh, went on to found the Adam Walsh Child Resource Center, which eventually paved the way for – and merged with -- the National Center for Missing and Exploited Children. And he became the host of a show on the fledgling Fox network, a show dedicated to tracking down fugitives and closing unsolved cases. "America's Most Wanted" would go on to become the network's longest-running series.

In the years since Etan Patz never made it to school, we've endured other nightmarish tales of abduction and murder, like that of Polly Klaas, Leiby Kletzky and most recently Sierra LaMar. And surprising recoveries, like those of Jaycee Dugard and Elizabeth Smart. And through it all, the "parents' worst nightmare" story has proven itself a reliably sensational basis for the evening news or Nancy Grace's entire career. The truth is that a stranger abducting a child, horrifying as it is to consider, is a very rare event. But it taps into our absolute most primal dread -- the wolf at the door, coming not for you but for a vulnerable child. Your child.

I was 13 when Etan Patz disappeared, little more than a child myself. I'd been walking to school unaccompanied since second grade.  I played in the streets with my friends during afternoons and summertimes, with a total, mindless freedom I can't give my own children. Not that I really think somebody's going to snatch them up, but that fear is always there, lurking. It's a possibility that never once crossed my mind as a child, nor, do I imagine, my mother's.

Hernandez' arrest seems to promise a closure to his story, even though Patz's own family have long believed another man, Jose Antonio Ramos, actually killed him. There's the hope of answers, of justice. But there's no real closure when a child is murdered. There's no closure when his body is never found.

As my children grow, their borders expand. I let them go, exploring their own limits, as healthy, self-reliant children must. But I think about the face on the milk carton. I don't know any mother who doesn't. I instinctively hold my breath a little in the moments before my children come through the door after school, and I hug them tightly when they come home, safe and sound. And on this National Missing Children's Day, I remember the little boy who didn't.