Yet another Afghan family (and a bakery in Pakistan) is extinguished by an airstrike: unleash the justifications 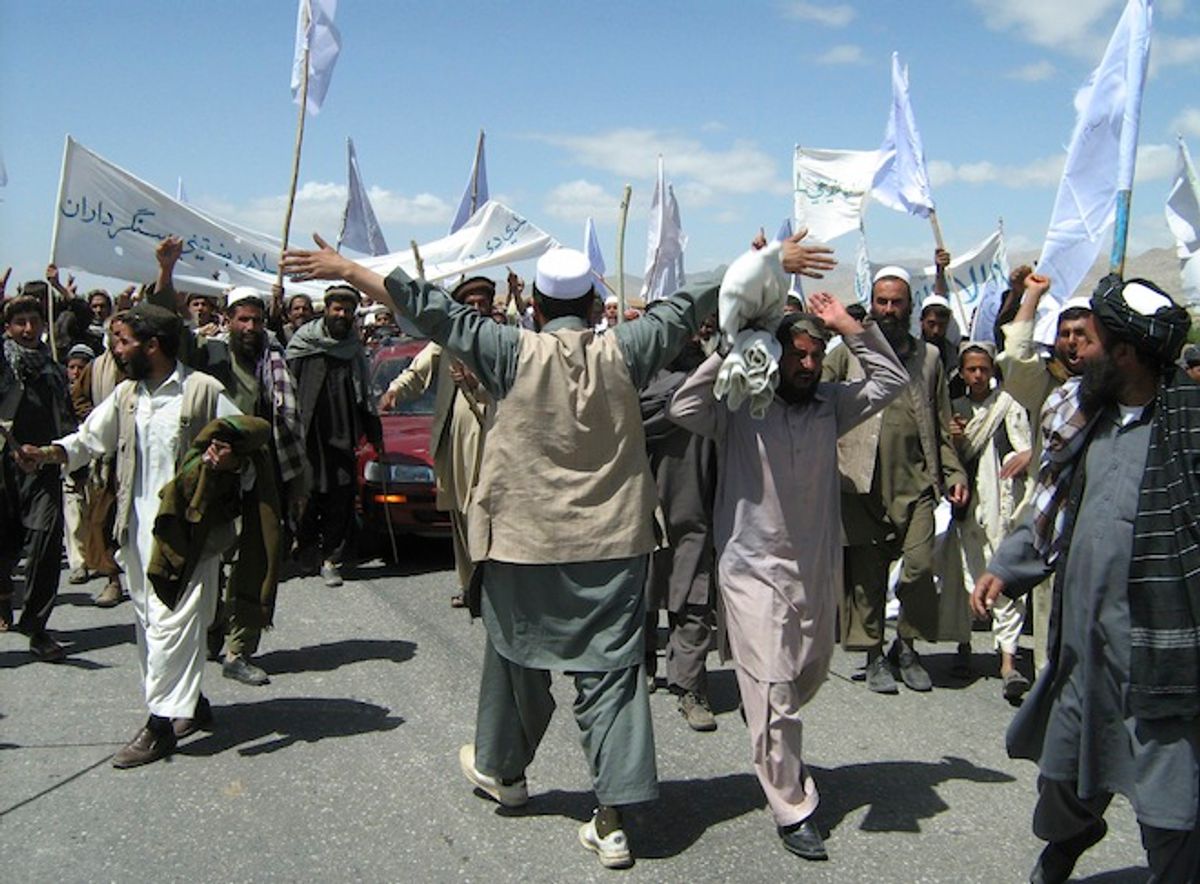 More than 1,500 Afghans block the highway between Kabul and Kandahar in Seed Abad, Wardak province, Afghanistan, Saturday, May 26, 2012. (AP/Rahmatullah Nikzad)
--

Yesterday, I wrote about the rotted workings of the Imperial Mind, but today presents a tragic occasion to examine its close, indispensable cousin: the Authoritarian Mind. From CNN today:

The airstrike took place Saturday night in Paktia province, said Rohullah Samoon, spokesman for the governor of Paktia. He said an entire family was killed in the strike.

The LA Times identified the victims as "Mohammed Shafi, his wife and his six children," and cited the statements from the spokesman for the Paktia governor’s office that "there is no evidence that Shafi was a Taliban insurgent or linked with Al Qaeda." The Afghan spokesman blamed the incident on the refusal of NATO to coordinate strikes with Afghan forces to ensure civilians are not targeted ("If they had shared this with us, this wouldn’t have happened"). Also yesterday:

An American drone fired two missiles at a bakery in northwest Pakistan Saturday, killing four suspected militants, officials said, as the U.S. pushed ahead with its drone campaign despite Pakistani demands to stop. This was the third such strike in the country in less than a week. . . .

The officials said the victims were buying goods from a bakery when the missiles hit. Residents were still removing the debris, officials said. All of the dead were foreigners, but the officials did not have any information on their identities or nationalities.

All of this is so widely tolerated, even cheered, among large factions of the American citizenry due to three premises:

(1) I have absolutely no idea who my government is continuously bombing to death by drone, but I assume they deserve it;

(2) when my government extinguishes the lives of entire families, including small children, as it often does, I know it's all for a just and important cause even if I can't identify it; and,

(3) we have to stop the Terrorists, because they keep killing innocent civilians.

That's the Authoritarian Mind, and it appears everywhere the Imperial Mind does.

The Washington Post yesterday reported that "on the periphery of Bagram Airfield, farmers, scrap-metal collectors and sheep herders have been crippled, blinded and burned by U.S. military ammunition on an unfenced and poorly marked training ground." Because "there is no barrier between nearby villages and the range — it is unclear where the dusty townships end and the vast military training area begins," Afghan villagers routinely stumble into unexploded ordnance and are severely injured or even killed, all because the U.S. military never bothered to demarcate the base. In 2009, its Commander-in-Chief, President Barack Obama, was awarded the Nobel Peace Prize.

UPDATE: This contrast from MSNBC's home page, as it appears right now, speaks volumes about the mindset of the American government and its establishment media:

For why this is exactly the reverse of what a responsible U.S. media outlet would do, see here.

TAPPER:  President Obama recently said that -- recently told John Brennan, his counterterrorism adviser at the White House that he wanted a little bit more transparency when it comes to drones, which are the - is one of the approaches that you're alluding to in Yemen.

And "The Times of London" reported last week that the civilian casualties in Yemen as a result of drone strikes have, quote, "emboldened Al Qaeda."

Is there not a serious risk that this approach to counterterrorism, because of its imprecision, because of its civilian casualties, is creating more enemy than it is killing?

PANETTA:  First and foremost, I think this is one of the most precise weapons that we have in our arsenal.  Number two, what is our responsibility here?  Our responsibility is to defend and protect the United States of America.

Note that Panetta studiously ignored, rather than addressed, the question of whether the U.S. -- by continuously killing Muslim civilians and thus intensifying anti-American animus -- is creating more Terrorists than it is killing and thus making the U.S. less safe. That's because there is no answer. Continuously bombing Muslim countries and killing civilians ostensibly as a means of combating anti-American Terrorism is exactly like smoking six packs of cigarettes a day to treat emphysema: one would do it only if one wanted to make the problem worse, or, at best, was recklessly indifferent to the outcome.