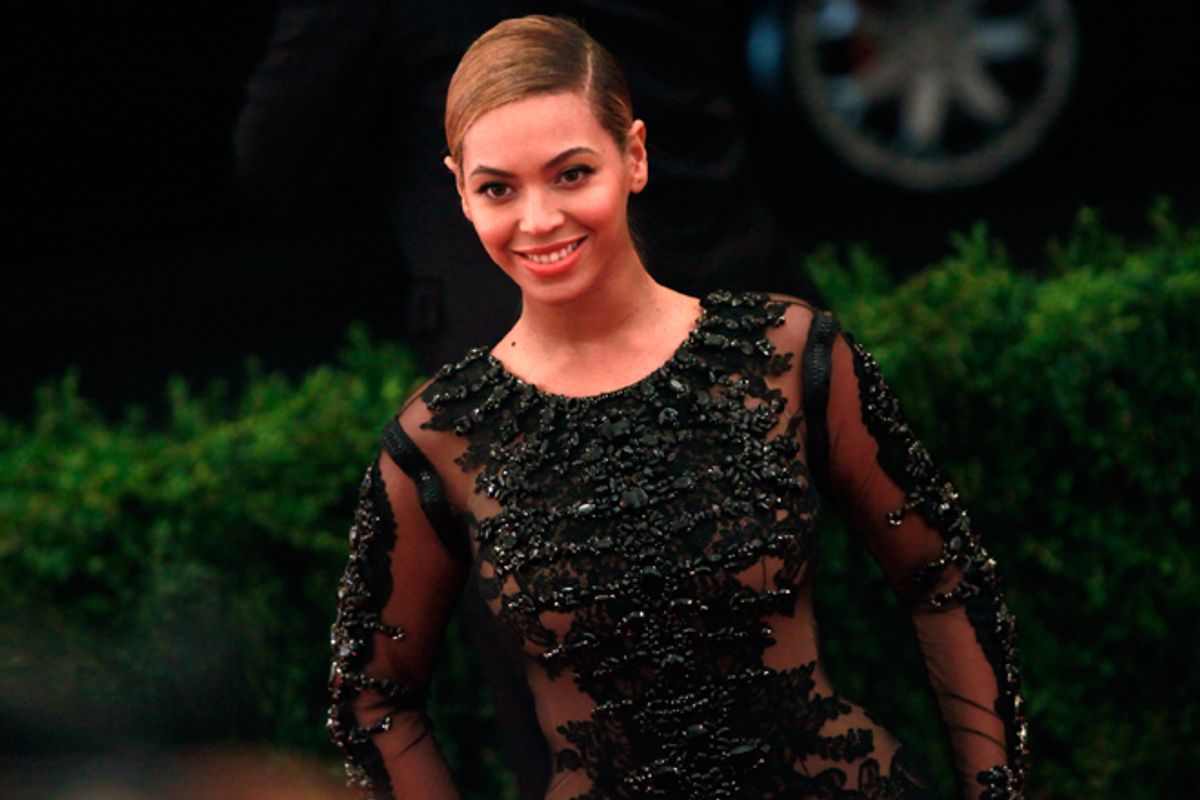 I understand your desire to get your famously hot body back. Even we mere mortals, who somehow managed to get impregnated despite never once making it to the Maxim 100, have gazed longingly at our pre-pregnancy pants, yearned to set our draw-stringed maternity clothes on fire, and gasped a "What the HELL?" when getting a load of our doughy postpartum selves in the mirror. And we never had to get in shape for a Victoria's Secret show. We didn't even coin the word "bootylicious" to describe our own assets.

So, Beyonce and company, I can only imagine the disconnect you feel, seeing yourself all squishy after having that baby of yours, and the pressure you must be under. But I am begging you all, knock it off. The world already will hold you under a cruel microscope the second you dare to step out in public. So, Miss Sasha Fierce, you don't have to joke, as you did during your comeback gig this past weekend, "Y'all have no idea how hard I worked! I had to lose 60 pounds. They had me on that treadmill. I ate lettuce!" Adding that you're now going to get "chocolate wasted" doesn't mitigate the message. This is what one does after having a baby: One gets on a treadmill and eats lettuce.

The stampede from sexy, pregnant and naked on a magazine cover to instant bikini body has become a celebrity rite of passage. Last year, Mariah Carey promptly flaunted her abs for Shape -- and became a Jenny Craig spokesperson after giving birth to her twins. After having her two children, Melissa Joan Hart -- tired of "blogs about me discussing how fat I've become" -- dropped down to 113 pounds and did the bikini cover for People. Jamie Pressly did one for Shape. Kendra Wilkinson did it for OK! a mere eight weeks after giving birth, showing off both her "easy diet" and her infant. Elisabeth Hasselback appeared on Fitness, swearing she "lost weight without dieting." Jennifer Lopez showed up on Us, smiling that she had her "best body ever" after her twins. Jessica Simpson hasn't yet debuted her post-baby body, but her deal with Weight Watchers suggests she won't be letting herself go all "fat Betty Draper." Instead she'll be more January Jones. And Heidi Klum, a multi-time champion of the Skinny Mom Olympics, did a Victoria's Secret show five weeks after having her daughter Lou. Five weeks!

At five weeks after giving birth, you're still sitting on inflatable donuts and junk is leaking out of your yoni. If you're breastfeeding, your rack is engorged, and your nipples are cracked and caked with Lansinoh. Assuming you haven't had a C-section tummy tuck, your abs look like raw pizza dough. And if you don't have a personal trainer, it's going to be like this for a while. That's the reality of new motherhood.

So what's the hurry? You could instead be like former Shape magazine cover girl Jenna Fischer, who, after the birth of her son last fall, sanely said:

There’s so much pressure on you as a new mom that the last thing you need to have hanging over your head is some expectation of what your body is supposed to look like. I actually think that the scrutiny of new mothers' bodies has gotten out of control. Every new mother just gets a free pass. I’m actually angered by the "posing in a bikini six weeks after having my baby" [trend]… Who cares if our boobs are hanging low and we have a little more junk in the trunk? We created a human being, everybody. Let’s celebrate!

A woman can have a baby and, in time, be just as fit as she was before. But it's not a competition. It's not a race. And the tabloid obsessiveness about mothers and their bodies – and the celebrity culture that feeds into it – is not just unnatural, it's unhealthy. It tells women that their value in the world, even after the miracle of childbirth, is always exactly how bangable they are. Real life should not be an Alan Tudyk scene from "Knocked Up." (It should be an Alan Tudyk scene from "Firefly," but that's another story.) And right after having a child, any woman -- even Beyonce herself -- should be entitled to a little extra jelly.