The face of collateral damage 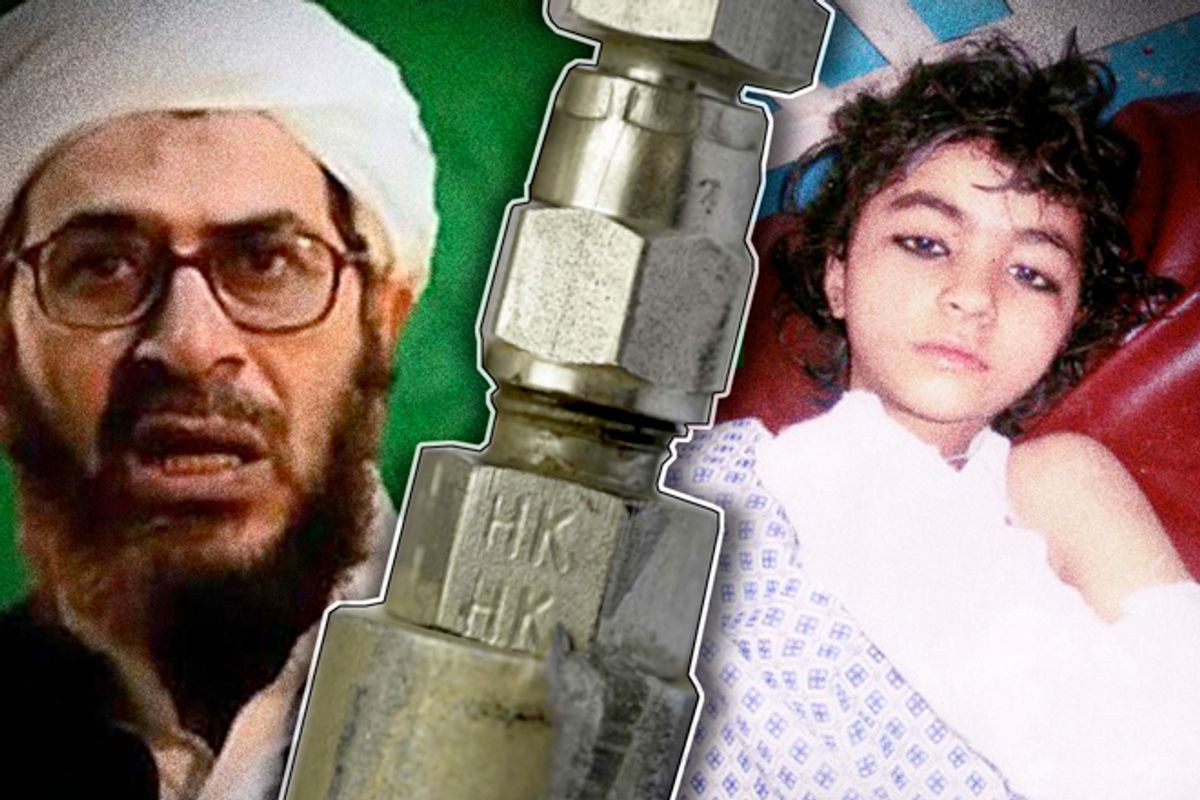 Al-Qaida commander Mustafa Abu Yazid; debris from a Hellfire missile; and Fatima, shortly before her death.
--

Around midnight on May 21, 2010, a girl named Fatima was killed when a succession of U.S.-made Hellfire missiles, each of them five-feet long and traveling at close to 1,000 miles per hour, smashed a compound of houses in a mountain village of Mohammed Khel in North Waziristan along the Afghanistan-Pakistan border. Wounded in the explosions, which killed a half dozen men, Fatima and two other children were taken to a nearby hospital, where they died a few hours later.

Behram Noor, a Pakistani journalist, went to the hospital and took a picture of Fatima shortly before her death. Then, he went back to the scene of the explosions looking for evidence that might show who was responsible for the attack. In the rubble, he found a mechanism from a U.S.-made Hellfire missile and gave it to Reprieve, a British organization opposed to capital punishment, which shared photographs of the material with Salon. Reprieve executive director Clive Stafford Smith alluded to the missile fragments in an Op-Ed piece for the New York Times last fall. They have also been displayed in England.

"Forensically, it is important to show how the crime of murder happened (which is what it is here)," said Stafford Smith in an email. "One almost always uses the murder weapon in a case. But perhaps more important, I think this physical proof -- this missile killed this child -- is important to have people take it seriously."

In the religious rhetoric used by al-Qaida's online allies, Fatima was a "martyr." In a statement quoted by Long War Journal, the al-Ansara forum said the senior al-Qaida commander Mustafa Abu Yazid had been killed in a "convoy of martyrs on the road with his wife and three daughters and his granddaughter; men, women and children; neighbors and loved ones." But Fatima was not Yazid's daughter, according to Noor, who reported from the scene. She was the daughter of another man who lost two wives and three children in the barrage.

In the euphemistic jargon of Washington, Fatima was "collateral damage" in the successful effort to assassinate Yazid, an Egyptian jihadist also known as Saeed al-Masri. In disregard for the official secrecy that envelops the drone war, U.S. intelligence officials leaked the classified details of the attack, telling the New York Times that they considered Yazid to be al-Qaida's "No. 3 leader." Relying on similar sources, the Washington Post said that al-Masri was the group's "chief organizational manager." Unlike other news organizations reporting on the attack, neither the Post nor the Times mentioned that women and children had been killed in the attack.

Some might say that Yazid invited the killing of his wife and children by traveling with them while allegedly plotting attacks on U.S. targets. But Fatima was not his child. She was just a girl in the neighborhood who came into the crosshairs of the CIA.

"It seems easy to say it was the children of a terrorist rather just the children of anyone else," said Shahzad Akber, a Pakistani lawyer who represents families of the drone victims. "For us it is difficult to say otherwise. How do we question that, because the CIA, who is [doing the] killing, is not sure either."

Whether Fatima was murdered, as Stafford Smith alleges, has yet to be determined. But the responsibility for the chain of events that culminated in her death are becoming clearer as the mechanics of the drone war continue to emerge.

The laser-guided missile that killed Yazid, Fatima and the others was probably made at Lockheed Martin's "Mission and Fire Control" facility in Troy, Alabama. The Hellfire missile, the most frequently cited weapon used in drone attacks, is produced in a factory located 30 miles south of Montgomery. The plant, which employs 271 people and is a mainstay of the local economy, produces a wide variety of missiles for the U.S. Armed Forces. The latest version of the missile, known as the Hellfire Romeo,  "defeats a broad range of targets," according to Lockheed Martin.

The missile destined to land in Mohammed Khel was then shipped by plane to a base in Afghanistan, where U.S. airmen fitted the missile onto the fuselage of another technological miracle, the Predator B drone (also known as the MQ-9 Reaper), which is built by Pentagon contractor General Atomics. Assembled at three different General Atomics factories in San Diego, this mammoth unmanned aircraft with a 66-foot wingspan was first deployed to Afghanistan for combat sorties in October 2007, according to the company.

But in as early as 2002, the CIA had obtained its own Predator for use in armed attacks in Pakistan, according to news reports. Because of the need to officially deny U.S involvement in Pakistan, the CIA -- not the U.S. Air Force — runs the drone program in Pakistan. The CIA now controls a fleet of up to 30 drones worldwide, according to a Washington Post story last year. The Federation of American Scientists says the CIA fleet includes several Predators/Reaper drones.

The CIA flight crew that sent the armed Reaper aloft in May 2010 was probably operating out of a U.S. air base in Afghanistan. Once in the air, the drone was most likely controlled by a two-man crew sitting at an ergonomically adjusted ground control station in a CIA office in northern Virginia. Former CIA counsel John Rizzo told Daily Beast reporter Tara McKelvey last year that he had witnessed drone attacks at such an office. The drone operators acted on the orders of senior Agency officials, he said.

In the first officially sanctioned public description of how the drone attacks work, White House counterterrorism adviser John Brennan said last month that individuals targeted for assassination must actively be involved in a plot to attack American forces, facilities or other targets. "The intelligence is vetted at high levels, and the decision to fire a missile is made with extraordinary care and thoughtfulness," he said.

In his interview with McKelvey, Rizzo said that he had signed off on CIA cables requesting "approval for targeting for lethal operation.” Rizzo, who resigned as general counsel in June 2009, said the cables provided a space for his signature, along with the word “concurred.” A typical cable targeted 30 people, he said. “The agency was very punctilious about this,” Rizzo said. “They tried to minimize collateral damage, especially women and children.”

The CIA general counsel at the time of the attack that killed Yazid and Fatima was Rizzo's successor, Stephen Preston, appointed by President Obama. In a talk at Columbia University Law School last October, Preston insisted that all decisions in cases of lethal force complied with "the four basic principles in the law of armed conflict governing the use of force: Necessity, Distinction, Proportionality, and Humanity."

"Great care would be taken in the planning and execution of actions to satisfy these four principles and, in the process, to minimize civilian casualties," he said in remarks that were cleared for release by the CIA.

"To enforce the law"

The specific actions U.S. officials believed Yazid was planning in May 2010 have not been disclosed, but Yazid was public in his desire to retaliate for U.S. drone strikes. He had praised the "supreme bravery" of the suicide bomber who killed seven CIA employees at the U.S. airbase in Khost in December 2009 to avenge the death of a Pakistani militant leader in a previous CIA drone strike.

Whether CIA officials watching Yazid's convoy on live video feed on the afternoon of May 21, 2010, were aware that it carried women and children is not known. So it is impossible to know if "great care" was taken to prevent the death of Fatima and the other children in the convoy. The presence of non-combatants in the immediate vicinity of targeted individuals has not prevented other CIA drone attacks in the past, most notoriously in the case of a June 2009 drone attack on a funeral ceremony that killed an estimated 60 people.

In the face of persistent complaints from the Pakistani government and near universal opposition in Pakistani society, the U.S. has since reduced the number of drone attacks. After a peak of 118 reported attacks in 2010, attacks declined to 70 in 2011, according to the New America Foundation in Washington. So far in 2012 there have been 14 drone attacks in Pakistan. The most recent one was on Monday, in which eight people were reported killed, none them named or identified.

Civilian casualties from U.S. drone attack are "exceedingly rare," Brennan said in his public comments, a characterization that critics hotly dispute with hard data and eyewitness testimony. The Bureau of Investigative Journalism, which monitors news reports of drone strikes, says 175 children have been killed in CIA drone attacks in Pakistan since 2004. Using a different methodology, the New America Foundation estimates that  11 percent percent of all victims in 2011 were civilians. Akbar's Foundation for Fundamental Rights says U.S. attacks "frequently hit civilians."

Stafford Smith says Reprieve hopes to end the drone attacks by publicizing evidence from the scene of the strikes and taking legal action.

"Not all drone use is a war crime," he said in his email, "but what is happening in Waziristan most definitely is -- as was Nixon's illegal war in Laos and Cambodia 40 years ago -- so we will be pressing to enforce the law."

In response to questions about the Hellfire missile debris found at the scene of May 2010 attack , a Lockheed Martin spokesperson referred Salon to a U.S. Army Public Affairs office in Alabama near the factory where the missiles are built. Salon has asked the Army if the serial numbers found near the place where Yazid was killed and Fatima was fatally injured came from missiles built in Troy. The Army has yet to reply.

In response to questions from Salon, a CIA spokesman cited Stephen Preston's remarks, added some "off the record" observations about Yazid, but otherwise declined to comment.