A reminder about WikiLeaks

As the risk intensifies that Assange may be prosecuted for his journalism, it is vital to remember what's at stake 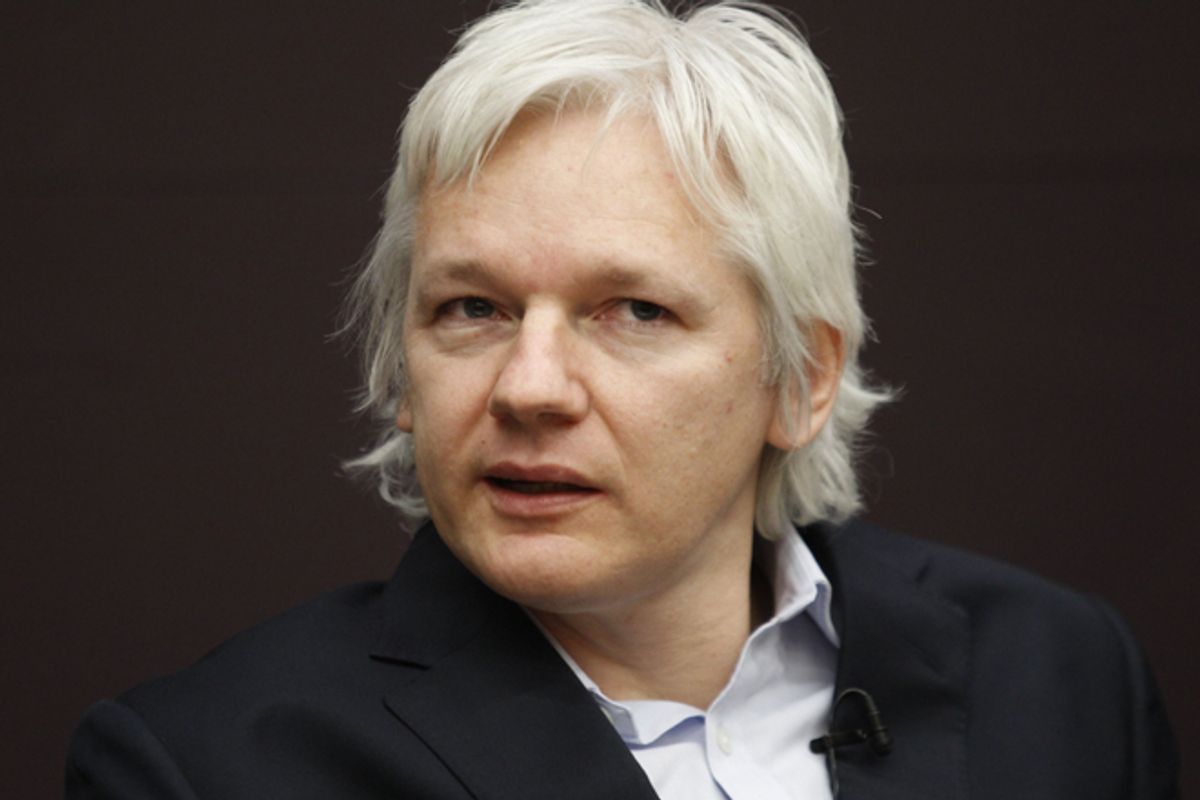 "Just in time to spoil the celebration of the 40th anniversary of the publication of the Pentagon Papers, the Obama Justice Department is trying to do what Richard Nixon couldn't: indict a media organization. . . . Charging Julian Assange with 'conspiracy to commit espionage' would effectively be setting a precedent with a charge that more accurately could be characterized as 'conspiracy to commit journalism'" -- James Goodale, General Counsel of The New York Times during its Pentagon Papers fight with the Nixon administration, writing in The Daily Beast, June 12, 2011.

When, many years ago, I first read about the Nixon administration's infamous break-in to the office of Daniel Ellberg's psychiatrist as a means to discredit the Pentagon Papers leak, I was baffled by the motivation. The Pentagon Papers revealed systematic lying on the part of the U.S. Government to the American public about the Vietnam War. Why, I wondered with a not insubstantial amount of naïveté, would public revelations about Ellsberg's personality and psyche have any impact on how those leaks were perceived?

But the answer to that is obvious, as Nixon well knew: by demonizing Ellsberg personally, even those inclined to defend the leak would be reluctant to be associated with him. If Ellsberg became associated in the public mind not with his noble exposure of government lies but rather with "strange" psychological drives or bizarre sexual fantasies -- the sort of thing one is supposed to reveal to one's psychoanalyst -- then he would become a figure of derision, an embarrassment, and nobody would want anything to do with him for fear of having his foibles reflect negatively on them. You smear the messenger, and the message is smeared along with him -- or, just as good, the message is forgotten and the messenger is abandoned to whatever punishments are doled out.

This has been exactly the strategy used to ward off support for Julian Assange, WikiLeaks, and Bradley Manning, with one difference: leaving aside Joe Biden, who denounced Assange as a "high-tech terrorist," this time the role of Nixonian henchmen is played by establishment-defending or Obama-loyal media figures rather than the administration itself. The New York Times -- led by John Burns and Bill Keller -- has continuously obsessed on Assange's alleged personality flaws while all but ignoring the vital disclosures about the U.S. Government for which he is partially responsible (Keller, the son of a Chevron CEO, wrote an article infamously complaining that Assange's socks were "filthy" and that he "smelled").

The NYT and numerous other media outlets also aggressively promoted a new group, "Open Leaks," started by former WikiLeaks volunteers offended by Assange's "imperious behavior" -- a group which, to date, has failed to produce a single leak. Meanwhile, people like this former Obama campaign press aide and current MSNBC contributor (a virtual redundancy) have continually demeaned Bradley Manning as “a guy seeking anarchy as a salve for his own personal, psychological torment” caused by his sexuality while ominously alluding to "plenty of other evidence that something wasn’t quite right with Manning."

As Ellsberg himself has repeatedly pointed out, this is the same sleazy strategy employed by Nixon to personally smear whistleblowers and demonize their psyches in order to discredit the substance of their disclosures and make it uncomfortable for anyone to support them. And it works.

While WikiLeaks enjoyed widespread support just a couple of years ago, the personal attacks on Assange and Manning -- along with the unproven and even uncharged sexual assault allegations in Sweden -- have dried up much of that support. Who wants to be seen advocating for an unhygienic, abusive egomaniac or a psychologically crippled, gender-confused, vengeful freak: the caricatures of Assange and Manning that have been successfully implanted in the public mind by today's Nixonian smear artists? The truth or falsity of these caricatures matters little for this tactic to work: once someone is rendered sufficiently radioactive in Decent Society, even many who are sympathetic to their cause will turn away, become unwilling to defend them, lest any of the slime relentlessly poured on the whistleblowers splatter onto their defenders.

But given what is at stake in the Manning case and especially the potential prosecution of WikiLeaks and Assange, this tactic must not be permitted to succeed. The judicial process in Sweden should and will be permitted to resolve the sexual allegations against Assange one way or the other -- given that he's not even charged, let alone convicted, he should enjoy the presumption of innocence -- but whatever the outcome of that case, the personal attributes or failings of Assange or Manning have no bearing on the threat posed by the U.S. Government's prosecution for the publishing WikiLeaks has done.

A coalition of leading journalists and media outlets in Australia have explained: WikiLeaks "is doing what the media have always done: bringing to light material that governments would prefer to keep secret" and prosecuting them "would be unprecedented in the US, breaching the First Amendment protecting a free press"; they added: "To aggressively attempt to shut WikiLeaks down, to threaten to prosecute those who publish official leaks . . . is a serious threat to democracy." The Committee to Protect Journalists sent a letter to Obama and Attorney General Eric Holder expressing "deep concern" over "reports about a potential WikiLeaks prosecution," which "would threaten grave damage to the First Amendment's protections of free speech and the press." Although American journalists were reluctant at first to speak out, even they have come around to recognizing what a profound threat an Assange indictment would be to press freedoms, with The Washington Post Editorial Page denouncing any indictment on the ground that it "would criminalize the exchange of information and put at risk responsible media organizations," and even editors of the Guardian and Keller himself -- with whom Assange has feuded -- are now vowing to defend Assange if he were to be prosecuted.

All of this merits particular emphasis now in light of yesterday's ruling by Britain's Supreme Court that Assange must be extradited to Sweden. For reasons I explained yesterday on Democracy Now, there is a very well-grounded fear that this extradition is intended to be the first step in his inevitable rendering to the U.S. for prosecution. Ample evidence, including my prior reporting, proves the Obama DOJ has an active Grand Jury investigation of WikiLeaks. Some evidence, albeit not entirely reliable, has emerged stating that they have already obtained a sealed indictment. That there is now a flurry of recent activity at exactly the time when it was known the British Supreme Court would issue its extradition ruling -- suspected WikiLeaks supporters being aggressively accosted by the FBI while Hillary Clinton is now meeting with top officials in Sweden -- adds to the reasonable suspicion that the U.S. is seeking to exploit Assange's extradition to Sweden as a means of bringing him to the U.S. to face prosecution under espionage charges. That this administration has an unprecedented fixation on secrecy and prosecuting whistleblowers -- while key Democratic Senators such as Senate Intelligence Committee Chairwoman Dianne Feinstein have publicly called for Assange's prosecution for espionage -- makes this all the more likely.

It's vital that this not be permitted to happen. Whatever one's discomfort with Assange's supposed personal flaws, that must not deter anyone from standing against what would truly be an odious indictment for the publication by WikiLeaks of critical information in the public interest. Last December in The Guardian, I argued that Bradley Manning deserves a medal, not imprisonment, if he actually did what he is alleged to have done. Here is a two-minute clip from my Democracy Now appearance where I made the case for why defending WikiLeaks is so crucial (this was not included in the segment I posted yesterday):