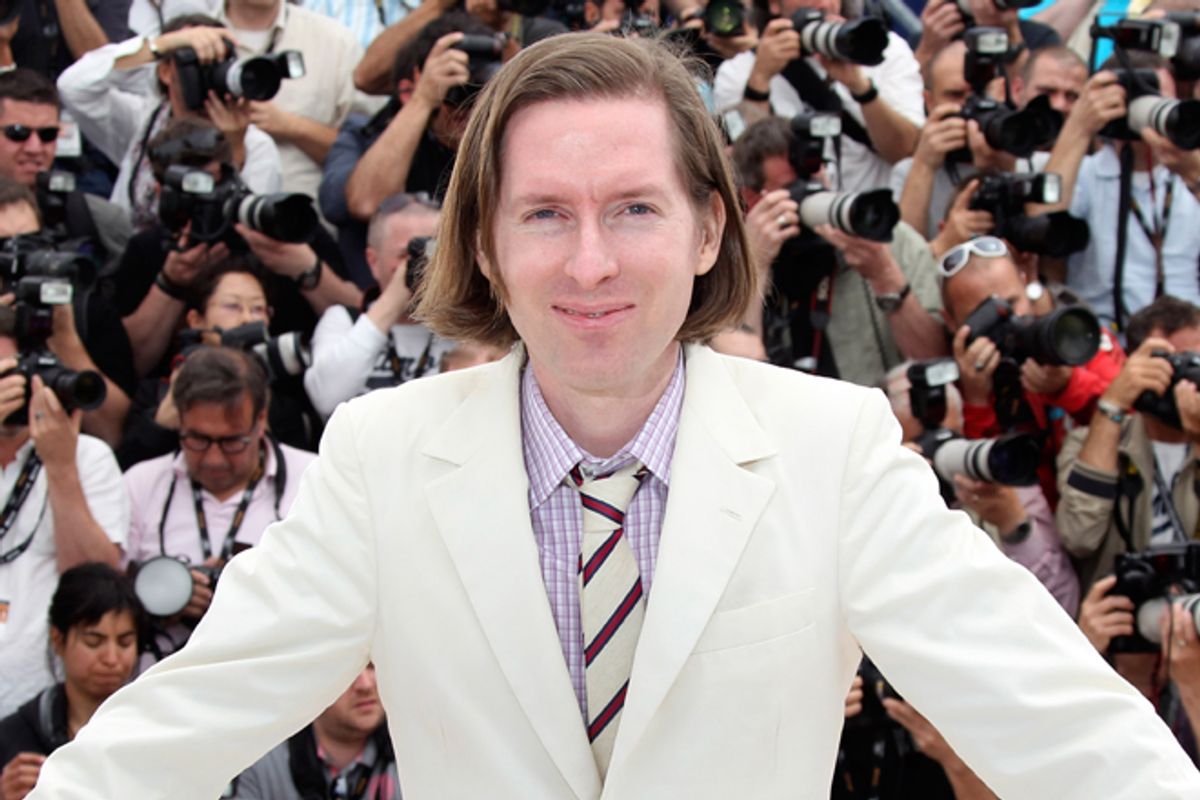 All narrative filmmakers, pretty much by definition, create artificial simulations of the world. Most of these simulations obey certain accepted conventions most of the time, which allow us to view them as "realistic" (mainstream comedies and dramas) or exaggerated in a familiar fashion (action movies and thrillers). The problem with Wes Anderson -- if you think there is a problem with Wes Anderson -- is that his movies appear to call attention to their own artificiality in an unusual way, and do not pretend to be naturalistic. This quality has made Anderson one of the most divisive figures among contemporary American directors, which is odd when you consider that his principal instrument is genial, rueful family comedy, not espresso-depresso or ultraviolent art cinema.

As I wrote last week in reviewing "Moonrise Kingdom," Anderson's new fairytale romance set on a remote New England island in 1965 (that is, in a Wes Anderson version of 1965), I'm pretty much on board with his whole trip. Furthermore, I think that those who accuse Anderson of precious or pretentious postmodern poseur-ness are missing the fundamental sincerity that lies beneath his view of movies and the world. "Moonrise Kingdom" may be the loveliest of Anderson's films, and is undeniably art-directed to the moon, but it captures both the sweet intensity of early adolescent love and the rueful complexity of adult emotion. While newcomers Jared Gilman and Kara Hayward are enjoyable as the preteen lovers, the movie's real heroes are Bruce Willis as the heartbroken island cop and Edward Norton as a lonely scoutmaster, who both give their finest performances in years. (Bill Murray and Frances McDormand are also terrific in smaller parts as a crumbling married couple.)

I recently caught Wes Anderson on the phone from his Los Angeles office, just after his return from Cannes, where "Moonrise Kingdom" opened this year's festival. We established, first of all, an odd point of connection: A family friend and Brooklyn neighbor of mine, the author, activist and sociology professor Alex Vitale, is Anderson's cousin. (I only bring that up because Alex played a role in our discussion of Sam, the rebel Boy Scout -- sorry, "Khaki Scout" -- in "Moonrise Kingdom.")

Wes, congratulations on the opening-night slot at Cannes. How did that go?

I think it went over pretty well, but you know, I'm probably not the best judge of it. It was a very good experience for me. I had a lot of fun.

Tell me what came first with "Moonrise Kingdom": The place and the period, or the characters?

I think the first thing was just the emotion of what it's like to fall in love at that age, and how it's completely overwhelming and powerful.

What was it about that particular period, the mid-'60s, that spoke to you? I mean, you weren't actually alive then.

You know, I think it was the feeling of being the end of -- at least when I look back on it, it looks like a more innocent time in the culture. When these kids in the story are 18, there's going to be such a radically different climate. I thought of it as the end of this Norman Rockwell time in our country, sort of.

Yeah, it feels like that. There was this period of optimism in American life, and that was pretty much the tail end of it.

Yeah, I think so. Again, I don't know how much of this is what we project as we look backward, but at least that's what it symbolizes for me.

I know you actually grew up in Texas, and you weren't even born until 1969. Do you have any family connections to that part of the world, the islands and coast of New England? Did you spend summers there or anything?

No, not really. It really has nothing to do with me. But I have spent quite a bit of time on a New England island over the last 15 or 20 years, visiting friends. One of the inspirations for the movie is one particular island where I've gone that's a place with no cars. It's only accessible by boat, there's no shops. There's only one farm on the island, and it really has its own whole set of traditions. The way this place has been for a long, long time is very well preserved, in fact, and when you go to this place it's like stepping back in time. It has a very particular sort of atmosphere, and that was something I wanted to conjure up a bit.

Right. It's like the people in the movie aren't just cut off from us because of 40 years of history. They're also geographically cut off.

Yes, I think they may be a bit further out to sea than you might think automatically. They're also very isolated characters, each one of them. So maybe that all ties together.

I have to ask you this: Were you ever a Boy Scout?

Uh, I tried it. I did not succeed. But, you know, I definitely wanted to be! I did not achieve any rank.

So Sam, the rebel outcast Scout in the movie, isn't personal to you. He almost feels like he might be.

I actually think he might be like Alex. [See above.] I can definitely see Alex rebelling against his Scout troop and walking out in protest. And that's probably where I would have ended up too.

I don't even know if I want to come out on this issue, but I wasn't just a Boy Scout. I was an Eagle Scout! And I have to say, for somebody who wasn't really a part of that world, you captured its terrors and delights wonderfully. Some of those summer camp scenes made me break out in a cold sweat.

I have to say: The idea of somebody being an Eagle Scout -- I'm still impressed by that. One of my closest friends in high school had a mohawk and listened to the Cramps and the Dead Kennedys, but at the same time was secretly continuing his Scouting. It was not something that any of us were ever in on, but when he graduated from high school, at the same time he was becoming an Eagle Scout. And it was interesting, in a way it was something I kind of recognized. He was a very independent thinker, and he didn't let the preconceptions about Scouting, or the aura of Scouting, which can be taken as quite square -- he didn't really let that deter him. Although I will say he kept it a bit compartmentalized.

You have no idea how strongly I identify with that, actually. Not to get sidetracked, but a good friend from my Scout troop, who came out as gay, is the guy whose discrimination case against the Scouts went all the way to the Supreme Court in the '90s, when they decided it was OK for the Scouts to kick him out.

Wow! Really? And they upheld it? On what basis can that be legally upheld?

Well, it's a private organization. Within certain limits, they can kick out whoever they want for any reason.

Now let's talk about Benjamin Britten! I thought using his music was such a weird and wonderful choice, and I wondered how you got there.

Well, first of all, my older brother and I were in a production of a Benjamin Britten opera or play, "Noye's Fludde."

The one we see in the movie. Where Sam and Suzy, the young lovers, first meet.

Yeah. So that was the first Britten, the thing that I had in mind. And then came "The Young Person's Guide to the Orchestra," which is a recording conducted and produced by Leonard Bernstein, with a 1960s child's voice reciting this narration -- which I guess is written by Bernstein. It felt very period, and also this music is very powerful to me. I'm a great fan of Britten. During a period of a year when I was trying to write the film, a big part of what I was doing was not actually writing the film, but just getting the sound of it figured out.

Well, you definitely inspired me. I'm going to track down that recording and play it for my kids. I have no idea if it'll still work.

I bet it will. It's very interesting, that whole piece, and we only used some of it in the movie. I think kids will still respond to it. Britten wrote quite a bit of music specifically for children, and also Leonard Bernstein was so interested in sharing classical music with children. I think there's still room for that, although I guess kids might have to be coaxed into it these days.

Some people have expressed the view that the characters and emotions in "Moonrise Kingdom" are childlike, or that it's basically a movie for children, and I have to say I totally disagree. I think you're always addressing the conflict between childhood emotions and adult emotions, but this movie strikes me as being more about the grownups.

I think there are parallel relationships going on in this movie, and the children are the only ones who have any real clarity about what they want. They have the limitation of not thinking very many steps ahead, but they certainly know what they want their next steps to me, and I think the adults don't even really have that. There's a simplicity to knowing with some certainty what you're trying to accomplish.

It's the thing that happens when you've seen it go wrong.

You create such specific looks for your films, and I guess I've always thought of that as part of the process of characterization. The design, the interiors and the exteriors kind of fuel who the people are. Is that close?

That is usually what I'm trying for. My kind of movie -- the kind I've always been interested in making -- are ones where part of it is that we're inventing a setting where I hope the audience has never been before. Part of the experience of the movie is going into this world, and the characters are a part of the world. They're a part of what is making that world. When I start a movie, I am very interested, from the script forward, in creating this universe where the story can take place and these characters can interact, but I very rarely think of myself as designing anything. I sort of think of it as all one thing together. It's just fleshing it out and trying to bring it to life and figuring out the details of artwork and behavior that can create this experience.

All filmmakers do a version of that, I think. But we don't notice it as much with the ones who depict the world more naturalistically. Your way of doing it calls our attention to the fact that the world you're creating is an illusion.

Yes. Well, I can't say that I am conscious of making an effort to call attention to what I'm doing, but I'm definitely making a point of trying to make something that's unfamiliar. To make the visual part of it a surprise, and contribute to it being something new. I guess I want to emphasize that I'm very conscious of wanting to make this world, but I don't particularly want people to think about me making it. I just want to make something that they're experiencing.