Anger toward labor will be a big factor in Tuesday's recall. But unions haven't grown too big; they're too small 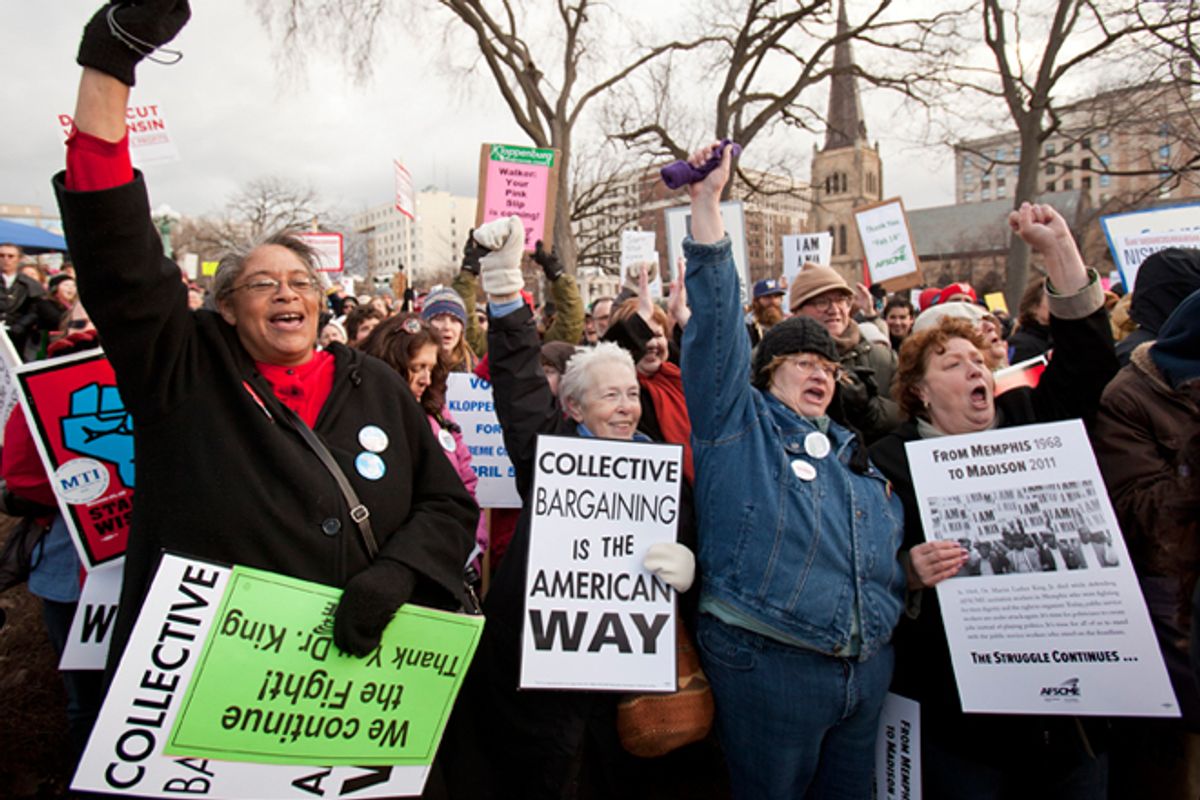 MADISON, Wis. -- If Scott Walker survives tomorrow’s election, there will be plenty of reasons. Many people will point to his huge cash advantage, for good reason. But no factor will have been more important than the decades of decline in U.S. union membership.

“Unions had their place,” a woman named Jerri told me soon after I arrived in Wisconsin last week. “They did their part back in the ‘40s and ‘50s, and then they got too big, and are abusing their power.”  Jerri and her husband, Tim (both declined to give last names), were eating at a bar in Wauwatosa, the purple Milwaukee suburb that’s home to Scott Walker. They both work in sales: She’s in retail at the mall; he’s in wholesale, selling caskets. Tim said Walker’s union “reforms” were necessary because local politicians had been “looking out for the union” instead of “people like me.” He said unions are for people who don’t “feel they should have to work very hard.”  Jerri complained that unions “are sucking off my teat.”  Public workers’ benefits, she said, “should be the same as anybody in any kind of private job.”

That last statement is most telling. While resentment toward unions has grown since the 1950s, it’s not because they got too big. It’s because they got too small. A multi-decade drop in unionization left fewer Wisconsinites who are union members or live in union households. Meanwhile, because governments are less prone than businesses to terrorize workers or shut down facilities to avert unionization, public sector unionization has remained more stable. In 2009, for the first time, there were more total U.S. union members in government employment than in the entire private sector.

Asked whether the decline in private sector unionization had paved the way for attacks on public sector unions, AFSCME union president Gerald McEntee told me that it hadn’t “necessarily laid the groundwork, but I think it does to some extent add to the problem.” McEntee added that private sector union rights used to be “sacrosanct in this country. But there’s been an erosion … as we see more and more of that, we see a weakness in the fabric of the labor movement.”

As Wisconsin has demonstrated so dramatically over the past year, there are plenty of non-union workers ready and eager to identify with the labor movement. Many are at the forefront of the anti-Walker movement, and many more are being mobilized to vote. “We don’t have a union, unfortunately,” a self-employed hair stylist told me in Appleton.  “But I know people who are in them, and I think it’s important. I don’t like the way [Walker] treated the teachers. Who’s next on his little hit list?”

But some non-wealthy Wisconsinites side against public workers – not a majority, but perhaps enough to keep Walker in office. “I hear it a lot online,” Madison elementary school teacher and union activist Kati Walsh said Friday. “It’s, ‘You get more than I do.’” Meanwhile, said Walsh, “I know that I can’t support a family on this.”

Chad Pichler, a full-time Milwaukee-area canvasser for the AFL-CIO affiliate Working America, told me he’s repeatedly come across non-union workers who say, “You know, I pay for my healthcare.”  He tells them union workers are “middle-class folks just like you,” and that the real enemy is greedy CEOs. Some respond that to get rich, “CEOs have to go to school.”

“People are in really rough shape,” Wisconsin AFL-CIO secretary-treasurer Stephanie Bloomingdale told me Wednesday. Citing Fox News and Republican TV ads, she said, “Money talks, and money works,” and thus some people “will turn around and blame someone who has just a tiny little bit more than they do … It’s very sad, and it’s something that we work every day” to combat.

Labor’s arsenal is full of arguments: By many measures, public sector workers receive less total compensation than their private sector counterparts. Pensions are more efficient than 401Ks. All public sector workers “contribute” to their retirement, because pensions are deferred compensation – money workers earned through work. Good jobs strengthen the overall economy.  And most important: You deserve good health insurance and a pension too.

All of that is true. But as I learned as a union organizer, policy arguments aren’t what tend to change people’s politics, and resentments are often stronger than reason (research suggests that this is even more true the more education someone has). What changes people’s politics are their experiences: Coming out. Getting mugged. Becoming part of a fighting union.

“We need to have union people tell the story of why the union matters,” Wisconsin state representative and former union organizer Brett Hulsey told me Friday night. That can’t hurt. But better communications, or highlighting unions’ volunteer work, or boasting about being reasonable in contract negotiations, won’t substitute for organizing more people to join the labor movement.

Walker is working to make that harder than ever (ditto for voting, and suing for equal pay and much more). Just as attacks on private sector unions left public sector unions vulnerable, so hamstringing public employees hurts private sector workers too. Despite Walker’s less-than-convincing claims otherwise, Democrats warn that it would only be a matter of time before a reelected Walker would push to make Wisconsin a “right to work” state – a goal that activists at a Madison Tea Party rally told me they’re eager to support. Union leaders say Walker’s public sector union-busting has already led to private sector strikes at Ashland Industries and Manitowoc Crane. Both strikes began after management demanded contract provisions like those Walker forced on public workers.

In other words, “divide and conquer” works, and it goes in both directions. National Republicans are all in to make sure Walker gets to keep doing it. On Friday, Walker campaigned with South Carolina Gov. Nikki Haley, a self-declared “union-buster” who presides over a state with brutally anti-union laws and the second-lowest unionization rate in the nation. When I asked Haley whether she saw her policies toward unions as “similar” to Walker’s, she answered carefully: “In my state I certainly don’t have the same issues in South Carolina as he does in Wisconsin.” Union members – public and private alike – could reasonably wonder if they themselves were the “issues” referenced by the governor.