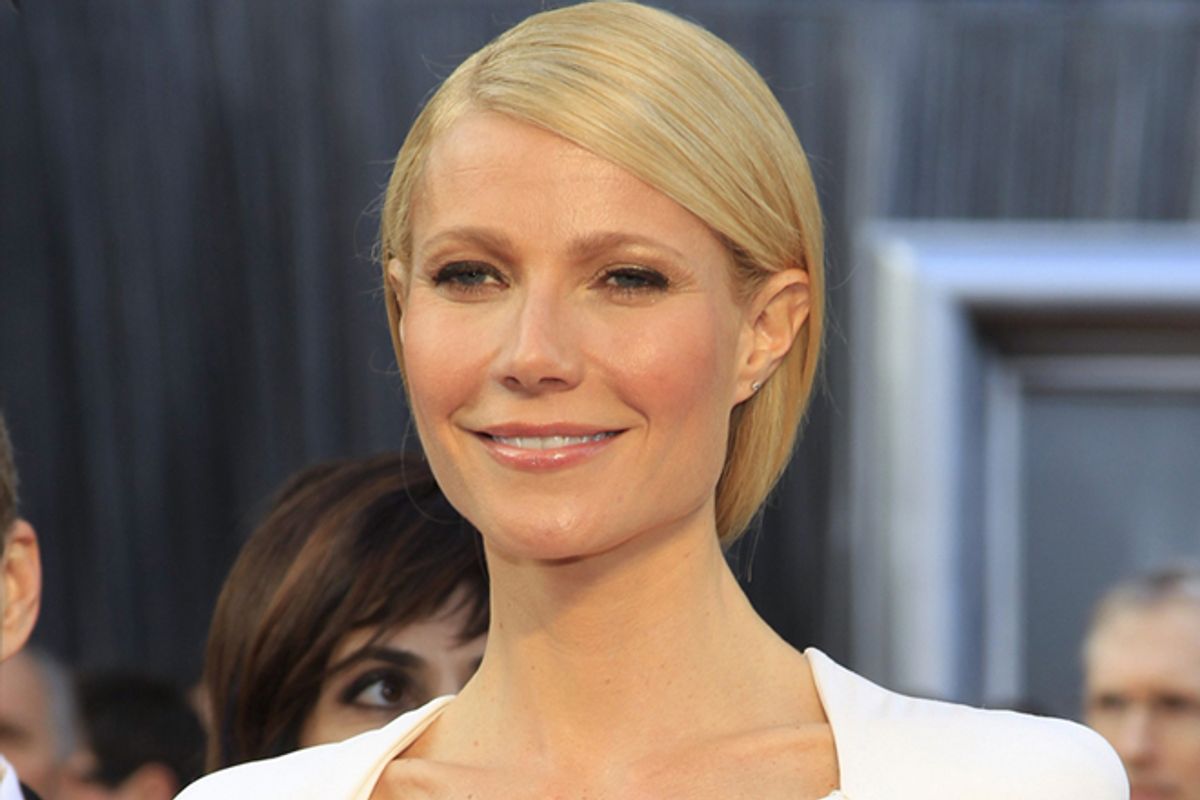 It's safe to say that if your father wasn't in the Black Panthers, or if you didn't grow up in the Marcy Projects in Bed-Stuy, you should tread carefully when you're attempting to flaunt your street cred. So when blond Spence alum Gwyneth Paltrow added the phrase "Ni**as in paris for real" when she tweeted a photo of herself on stage in the City of Light with Kanye West and Jay-Z, a lot of folks didn't take it too kindly. Did it matter that, as she quickly explained to the uninitiated, it was a reference to a song by the same name off their album "Watch the Throne"?

No, it did not. On Newsone, Dr. Boyce Watkins said that "an apology is owed to black people who are offended by a white woman using the N-word to define other black people around her." And Richard Lawson wrote in the Atlantic Wire that it was an expression "someone like Gwyneth Paltrow … should not be saying." The Dream, who snapped the photo, jumped into the fray, insisting that "Fyi Sorry for the Confu I typed Ni**as in paris for real from Gwens Phone my bad I was Fkd up please excuse it! We were lit!" But the L.A. Times wrote that the "instant reaction was that Paltrow had no business tweeting the N-word" and even Jezebel declared that Ms. P. "Tweets Out the N-Word."

Let's take a step back and get some clarity here. We all know by now what's implied the moment we see the letter N in any context. But look how many steps removed from the word itself Paltrow actually was. It was a reference to a song title -- a title doesn't use the word itself, but a slanged up, letter-A-on-the-end version of it. That she inserted two asterisks into.

The mere suggestion of the word – and with it, its contentious, painful history – is obviously powerful. It's what distinguishes it from other bleepable phrases, separates it from garden-variety profanity and moves it into the truly incendiary. Most of us get that. Look how easily plenty of us will sing along any time with the title of a Cee Lo Green song, but screech to a stop after the phrase "Just thought you should know." It's like that with any slur that's been used to put down groups of people. Though you may know every line of "The Message," you probably stumble when you get to Grandmaster Flash's part about an "undercover fag" too.

Why? Because there's a difference between what we consume as listeners or viewers and what we ourselves can participate in. The moment we appropriate, we identify, and if the identification doesn’t fit, the message can be corrupted and misinterpreted. That a privileged, dewy white girl assumes that because she stands on a stage with Kanye and Jay-Z in any way makes her a "Nigga in Paris" is pretty silly. If that's the part of this episode that makes you bristle, fair enough. But does anyone's whiteness or privilege mean that she can't even make a veiled, asterisked reference to the title of a song? That if she does, she's, gasp, "said the N-word"? I'm no fan of Gwyn, but come on. If you want to be outraged, be outraged at what someone is really saying and doing. And be subtle enough in your thinking to grasp the distinctions between the suggestion of a word, the quoting of a word, and the actual derogatory usage of a word. As the Dream explained on Twitter, "Context is everything. Meaning it in the context as a Song which is how we Sold it to the world!"