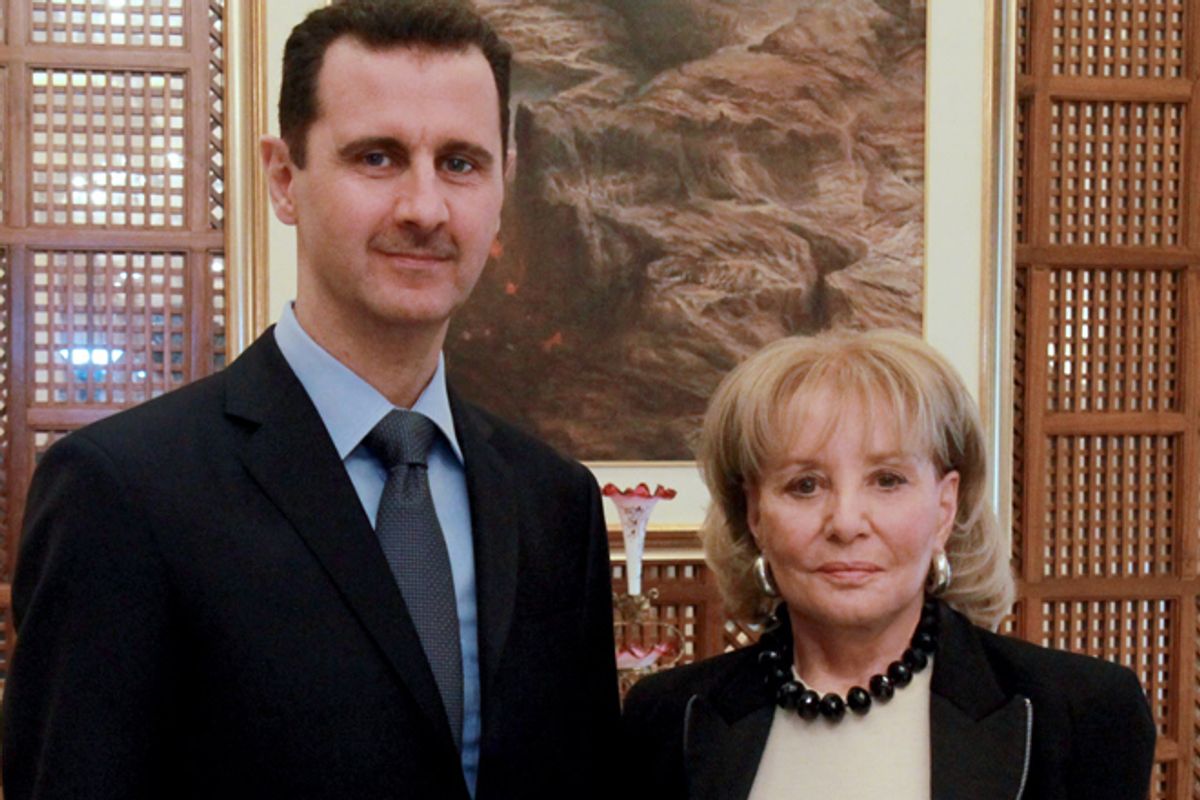 Everyone who pays attention to such things knows that Barbara Walters is a monstrous creature of pure, amoral power. She was Roy Cohn's beard, for godsake. But sometimes her cravenness can still surprise. Apparently, after her ridiculous softball interview with her personal friend, Syrian strongman Bashar al-Assad, Walters attempted to repay the Assad press advisor responsible for netting her the exclusive by recommending the aide (to a brutal dictator currently in the process of putting down a rebellion with excessive force) for a plum American media internship.

Well, she's sorry. Sorry she opened up the old Rolodex on behalf of Sheheradad Jaafari, Assad's 22-year-old press advisor, and the daughter of the Syrian ambassador to the U.N. (Good lord, even dictators' aides need powerful parents to net media internships.)

In her e-mail to CNN, Ms. Walters noted that she had first spoken up for Ms. Jaafari to Mr. Morgan when he was a guest on her daytime show, “The View,” telling him, “I have a candidate for you.” In the e-mail, she praised Ms. Jaafari as “a sensational young woman” who would make a “wonderful hire” for the program, if it had an available position. Ms. Jaafari’s résumé was included.

CNN, to its credit, did not get this woman in internship. (Nor did Barbara Walters' similarly effusive email to a Columbia Journalism School professor and former ABC News executive get Ms. Jaafari into Columbia.)

So that's what Walters thought of Jaafari. "Terrific" and "beautiful" and "brilliant." Amusingly, an email from Jaafari to her bosses from just before the Walters interview was leaked to the press months ago. It's less kind.

She advised: "It is hugely important and worth mentioning that 'mistakes' have been done in the beginning of the crises because we did not have a well-organized 'police force.' American psyche can be easily manipulated when they hear that there are 'mistakes' done and now we are 'fixing it.' It's worth mentioning also what is happening now in Wall Street and the way the demonstrations are been suppressed by policemen, police dogs and beatings."

The Assads, as a very modern and cosmopolitan dictator power couple, seem to prize P.R. and media experience in their inner circle. And up until the recent (utterly horrific) unpleasantness, they have been rewarded with largely fawning coverage in American and international media. Poor Walters was just a bit behind the curve. It didn't become unacceptable to do favors for these tyrants until pretty recently!