"Prometheus," the long-awaited "Alien" prequel, is an enthralling popcorn spectacle -- if you ignore the theology 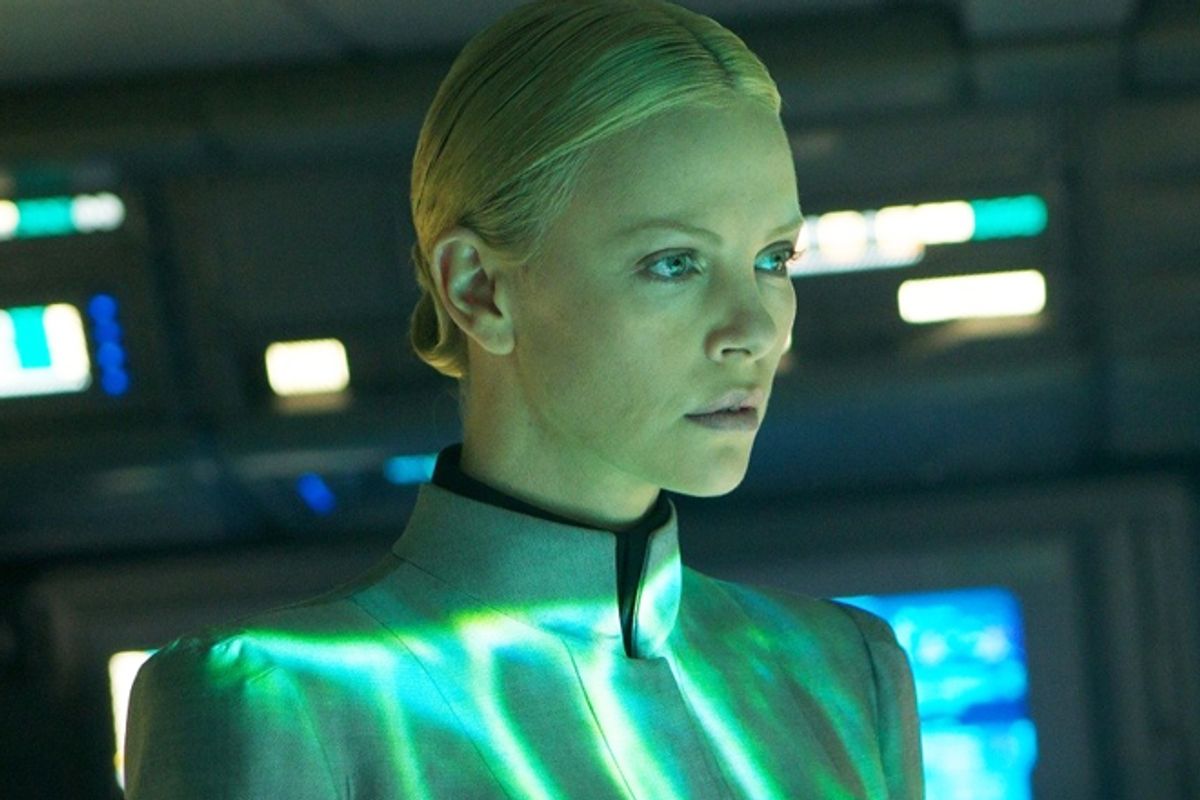 Somber, spectacular and ponderous, "Prometheus" virtually thrums with the desire to become a classic of science-fiction cinema, as well as a late-career landmark for its 74-year-old director, Ridley Scott. As movie buffs around the world already know, "Prometheus" is a long-contemplated prequel -- presumably the first in a series of prequels -- to Scott's 1979 "Alien," which blended the horror and sci-fi genres to powerful effect and announced the arrival of a distinctive visual and design aesthetic. That's been Scott's signature over the past 30-odd years; he's made good films, bad films and lots of indifferent ones ("Someone to Watch Over Me," anyone? "Matchstick Men"?), but they've pretty much all had the patented Ridley Scott Look.

So the first thing to say about Scott is that he has a mysteriously outsize reputation among his fans, who remain devoted to two Zeitgeist-shaping classics he directed many years ago ("Alien" and "Blade Runner," of course), and completely unaffected by all the ensuing mediocrity. I mean, maybe there are people who watch "White Squall" or "A Good Year" over and over again. I've never met any. Furthermore, as jaundiced a view as I may have of Scott overall, I totally get it. Those two movies helped shape the sensibilities of several generations of moviemakers and movie critics and movie buffs, and continue to do so. I vividly remember cutting school with two friends to go see "Alien" on opening day in San Francisco, and sitting -- quite literally -- on the edge of my seat for the entire first hour. (One of those two guys, by the way, grew up to be an Oscar-winner.)

The next thing to say, though, is that "Prometheus" damn near lives up to the unsustainable hype, at least at the level of cinematography, production design, special effects and pure wow factor. This tale of a deep-space mission late in the 21st century, several decades before Sigourney Weaver's Ripley and the crew of the Nostromo will discover an abandoned alien spacecraft and its sinister cargo, is a sleek, shimmering, gorgeous and often haunting visual mood piece. No other recent science-fiction film, with the sole exception of "Avatar," has created such a textured, detailed and colorful vision of the human space-traveling future, and indeed it's reasonable to assume that Scott conceives of "Prometheus" as a pessimistic counter-argument to James Cameron's eco-parable on various levels. (Let's not forget that it was Cameron who directed "Aliens," the massively successful 1986 follow-up that turned Scott's "Alien" into a franchise. I suspect there's a lot more hay to be made in exploring their rivalry and, to wax pretentious for a sec, their artistic dialogue.) With its luminous 3-D graphics, deep-focus compositions in grays and iridescent greens and moody blues, its cat-suited females and broad-shouldered males, "Prometheus" is one of very few films in the recent 3-D wave to justify the pumped-up ticket price for those glasses. (The others would be "Avatar," "Hugo" and maybe "Despicable Me.")

You may have noticed that I've cranked out several hundred words about "Prometheus" without discussing its story or characters. Partly that's because those things are a whole lot less important than, say, Dariusz Wolski's cinematography, Arthur Max's production design, and the art direction of John King, Marc Homes, Karen Wakefield and their team. Then there's the fact that every nuance and hint and unanswered conundrum raised in the "Alien" prehistory concocted by screenwriters Damon Lindelof (a co-creator of "Lost") and Jon Spaihts will be endlessly debated and dissected by fans after they see the movie. I don't want to ruin the fun for folks who are already fascinated by the origins of the Space Jockey (that extra-large dead alien spaceman seen early in "Alien") and the Xenomorphs (the human-incubated, many-jawed monsters) by issuing too many near-spoilers. And I shouldn't spend too much time observing, for instance, that the whole thing seems to resolve into a cynical hodgepodge of bogus science and even more bogus theology, all of it crafted with an eye to fueling further sequels.

But let's back up a minute: The portentousness and grandiosity of "Prometheus" is at once the film's great strength and great weakness. Scott's eponymous spacecraft -- a triumph of late-modernist design that might almost be described as the movie's main character -- is on its way to a distant star system, with its crew packed in suspended-animation glop, in search of nothing less than the origins of the human species. If I followed the story correctly, some immensely rich and impossibly old dude (played by Guy Pearce, apparently wearing Leonardo DiCaprio's leftover J. Edgar Hoover face) has agreed to fund this trillion-dollar mission because two archaeologists, Elizabeth Shaw (Noomi Rapace) and Charlie Holloway (Logan Marshall-Green), have decoded some kind of star map found in prehistoric glyphs and paintings all over the world.

OK! Clearly the only reasonable explanation of the mysterious pattern discovered by Shaw and Holloway is that giant geezers from space planted the seeds of humanity on Earth eons ago, and then came back bazillions of years later just to convince preliterate civilizations to leave behind invitations for us to come visit when we were all grown up. Then they left again, barely an eyelash ago in planetary time, maybe just to pick up some smokes or collect the many-tentacled kids from day care. Look, I realize that Lindelof and Spaihts got paid a lot of money to develop the "mythology" of this universe, and they're probably convinced they've gotten all its clues and feints and subterfuges worked out. But there's about 17 kinds of nonsense just in the setup for "Prometheus," before we even get to the main action. (Who brings archaeologists, of all useless professions, on a space mission?) You're way better off just letting the mood and mystery and menace of the movie surround you, and not trying to puzzle it out.

Rapace's rather mousy Shaw fills the Sigourney Weaver female-protagonist role to some extent, and gets to perform an act of especially disgusting auto-surgery that rivals anything else in the "Alien" films for pure ick factor. But she never really holds our attention as do the film's villains, a complementary pair of corporate robots played by Michael Fassbender and Charlize Theron. Fassbender's David, who actually is a robot -- and the crew's lone sentient member during its long voyage from Earth -- is another performance of hambone precision, if that's not a contradiction in terms, from the terrific Irish actor. Mind you, it's a bit weird that even 40 years after HAL in "2001: A Space Odyssey," the best way to make an artificial intelligence seem evil is to make him prissy and queeny and presumptively gay. Still, it's a hilarious performance, as if some great manipulative genius out of classic literature -- Gilbert Osmond, say, from "Portrait of a Lady" -- had been juiced up with electronic circuits and shot into space.

Theron, who's simultaneously killin' it in the multiplexes as the evil feminist queen in "Snow White and the Huntsman," plays a rather similar role here, as the ice-blond private-sector overlord whose true mission obviously has nothing to do with asking philosophical questions of the "Engineers," as Shaw and Holloway have dubbed the so-called master race who created us. Honestly, now -- I really enjoyed watching "Prometheus" almost the whole way through, and I'm looking forward to seeing it again. It's an enjoyable thrill ride, slicked up with a thin veneer of Asking the Big Questions. But do its so-called heroes really have to be such blithering New Age idiots? Let's allow for the narrative possibility that someone or something created human life, and/or all life on Earth. Is traveling to the edge of the universe to ask that entity why they did it likely to yield an interesting answer? If Dolly the cloned sheep had been able to talk, would she have chased those Scottish scientists into their lab and baaed for explanations? "Because we could, sweetie. Now stop eating my trousers."

The spaceship's crew includes a nice turn from Idris Elba as its gruff captain, and enjoyable supporting roles for Sean Harris, Rafe Spall, Benedict Wong and others. It will surprise absolutely no one that when the Prometheus reaches its destination -- a distant planet that apparently is not the same one the Nostromo visits in "Alien" -- it does not discover a race of benevolent deities ready to take questions via Google Translate. Instead they find wiggly things, and rows of vases oozing sticky, black goo, and we have a pretty good idea where that stuff leads. Key plot points, as per usual, depend on the characters' dunderheaded decisions and general lack of common sense. Try this out as a rule, astronauts of the future: When on an unexplored alien planet, do not try to make friends with the giant plenary worms!

I'm generally in tune with the mordant philosophy that seems to be expressed in "Prometheus": If you think the human race are assholes, wait till you see who made us! But it's enclosed, in this case, in a shiny-looking vehicle that becomes more and more like your average horror-chase movie as it goes along, channeling not just the entire "Alien" series but also "Blade Runner" and "Avatar" and John Carpenter's "The Thing." But what "Prometheus" resembles most strongly, if perhaps accidentally, is Terrence Malick's "The Tree of Life," as unlikely as that sounds. Both are grand statements of artistic purpose, and searches for the beginning of time and the meaning of life. Both are obsessed, even hypnotized, by the unmatchable spectacle of Stanley Kubrick's "2001," the greatest of all murky sci-fi allegories. Both will be avidly defended by fans and viciously derided by detractors. Both are mightily impressive spectacles that will maybe, kinda, blow your mind, en route to a hip-deep swamp of pseudo-Christian religiosity.