Bring on the gay Boy Scouts

A new challenge sheds light on a horribly outdated policy. It's time for the Scouts' exclusionary rules to end 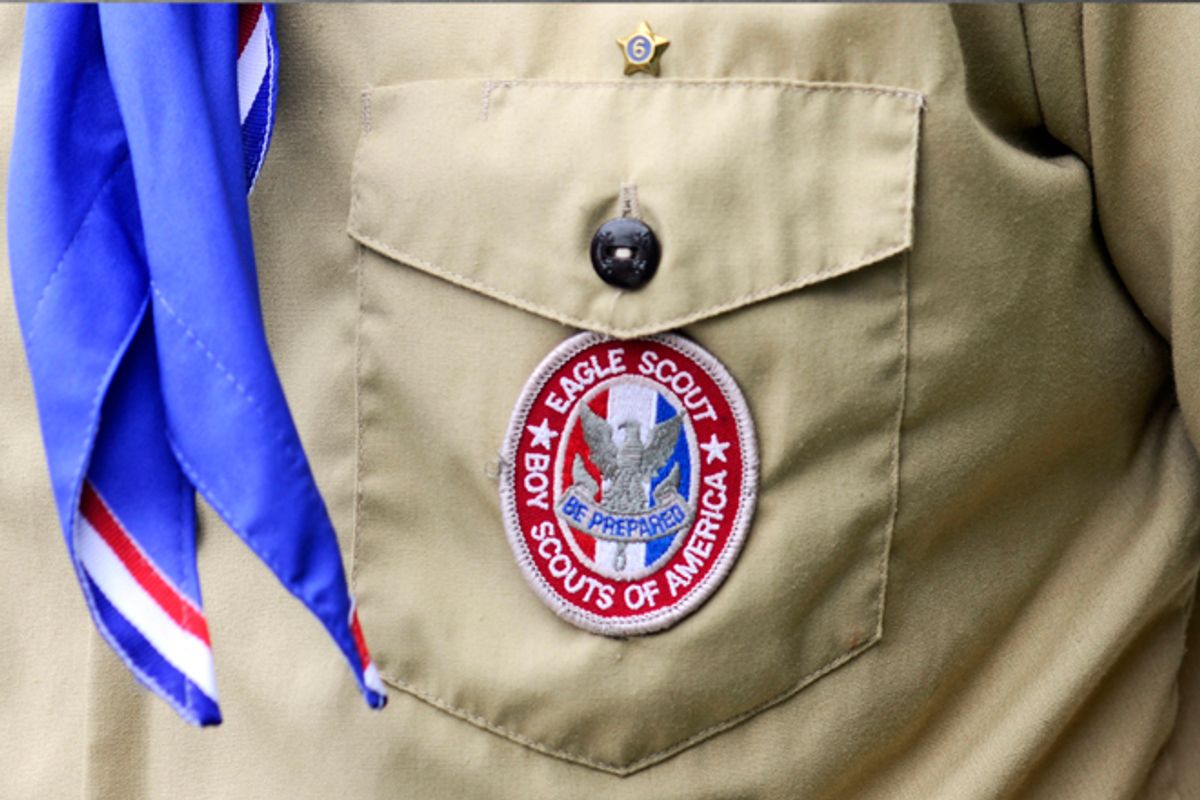 So you're an organization that "builds character and trains [young people] in the responsibilities of participating citizenship." Naturally, that means you practice institutionalized discrimination. Maybe it's time to rethink a few things, Boy Scouts of America.

That the Boy Scouts refuse to offer membership to LGBT individuals is nothing new – they've been expressly prohibited from participating in the Scouts for over 20 years, on the grounds that "homosexual conduct is inconsistent with those values" the group wishes to instill. Since then, the right of the Scouts to be exclusionary has been thrashed about, tested and challenged, always unsuccessfully.

But though there are still miles to go before we attain anything like true equal rights, this business of shutting gay and lesbian people out of the stream of American life just isn't as popular as it once was. So last year when Iowa resident (and Salon's 2011 sexiest man) Zach Wahls spoke proudly about his two moms before his state's legislative hearings to ban same-sex marriage -- and about his status as an Eagle Scout -- it struck a deep chord and renewed the debate. Wahls went on to form Scouts for Equality to "lead a respectful, honest dialogue with current and former Scouts and Scout Leaders about ending this outdated policy."

And then Jennifer Tyrrell, "a devoted partner, mother, friend and community leader in Bridgeport, Ohio," was dismissed as a Tiger Cub den leader for her son's Cub Scout troop on the grounds of her orientation, or, as the Scouts told her, because she did "not meet the high standards of membership that the BSA seeks." The high standards of being, you know, not so gay. A Change.org petition was born, and a resolution was placed before the Scouts to reappraise its standards.

The resolution has been seen by some as an encouraging sign of openness, but the organization has discouraged pulling out the rainbow flags just yet. Boy Scouts chief executive Robert Mazzuca told USA Today this week that "We have no plans at the moment to make any changes." And in a public statement on its website, the Scouts make it clear that they have "no plans to change its membership policy. The introduction of a resolution does not indicate the organization is 'reviewing' a policy or signal a change in direction." In other words, don't hold your breath. It further adds, rather huffily, that "In April, a single individual submitted a resolution asking the Boy Scouts to consider amending its policy on not granting membership to open or avowed homosexuals."

Right, the Scouts' discriminatory policy is just the gripe of a "single individual" and not some two-decades-long battle. And come on, what do those shameless, wanton, avowed homosexuals expect anyway? With their openly being gay and all? Apparently it's still OK with the Boy Scouts to be a homosexual, as long as you're deeply closeted. You know, the kind of gay who doesn't make people uncomfortable with his or her entire way of being.

Because the Scouts are a private organization – one of the largest in the nation, in fact – its long-held argument goes that it has the right to set its own criteria for membership. Which is a steaming pile of crap. The only reasonable criteria for any organization that purports to instill character is how your members behave, not who they are. That's why this issue isn't going away. That's why, despite the Scouts' insistent, repeated use of the phrase "no change," change is exactly what needs to happen -- and will. As Jennifer Tyrell told CNN this spring, the Boy Scouts are "about teaching children to be better adults. And we aren't doing that by teaching them to hate or discriminate."