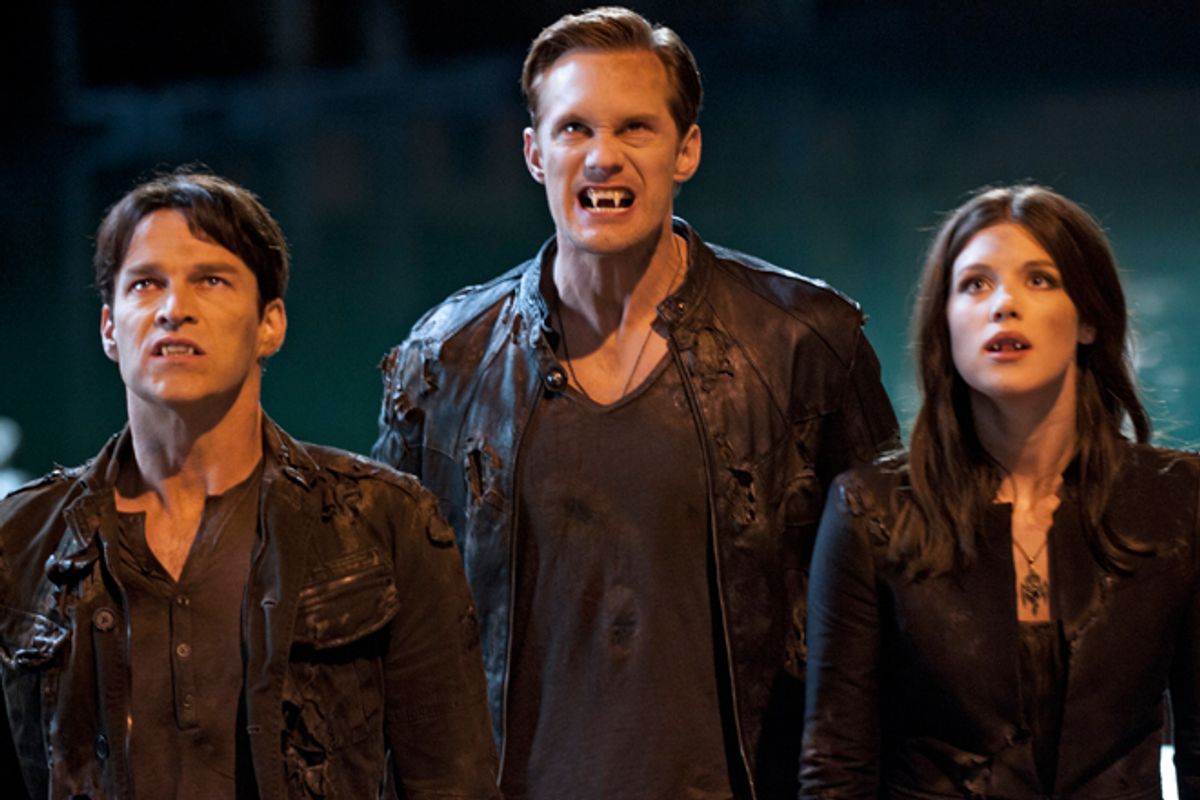 You can tell a lot about an HBO show from the way that it curses. The grandiose linguistic embellishments of “Deadwood,” the anthropologically accurate cussing of “The Wire,” the brutal thugishness and sudden verbal grace of “The Sopranos” are all emblematic of each show's larger aesthetic (and a signifier to audiences that they’re getting their premium cable money’s worth). The bawdy language on “True Blood” is also indicative of the series’ artistic vision, and since nine times out of 10 the curses uttered on the steamy supernatural soap are some variation on the f-word, take that to be a bedrock faith in the following: Fucks are always interesting.

“True Blood,” the ultimate summer series, begins its fifth season on HBO this Sunday night, and the cursing and the fornicating are present and accounted for. (Though through the first four episodes, the cursing far out-performs the fornicating — there is only one shot of Alexander Skarsgard’s bare buttocks, for goodness sake! — but that does leave eight episodes for copulating to try and close the gap.) In the meantime, the f-bombings remain, as ever, exorbitantly done, each swear delivered by an actor biting off its every syllable, delighting in it, relishing it and slamming it down, like its very own punch line. As with everything about “True Blood,” the language is not particularly inventive or clever, but it’s delivered with a wink, a smile and maybe a flash of fang or unclothed hip bone, and that’s — really — entertainment.

When “True Blood” began, vampires were just coming out of the coffin, hoping to forge a peaceful coexistence beside human beings, thanks to a synthetic blood substitute. Vampirism on “True Blood” has since been used as a metaphor for nearly every thorny issue we’ve got — racism, homophobia, drug addiction, sex addiction, evangelicalism, xenophobia — and part of the fun has been tracking these metaphors, mixed up and convoluted as they have become. Less fun has been the seemingly endless hit parade of mystical beings introduced season after season, drawing focus away from those vampires, their many meanings and insatiable sex drives. Nothing against maenads, shape-shifters, werewolves, fairies and witches, but there is a reason none of you are movie stars (Jacob Black excepted).

So it’s with much appreciation that I report that Season 5 of “True Blood” is not about the introduction of any new magical creatures (though the fairies are up to some B-story shenanigans), but the long-discussed Authority, the seven-member governing body of all vampires everywhere. The Authority consists of, among others, that evil child vampire Spike seemed to have killed in the second season of “Buffy,” Salome — yes, that Salome — Roman, the HMFIC, played by the wonderfully commanding, handsomely dressed Chris Meloni; and some traitors. See, the Authority has dedicated itself to the success of the “mainstreaming” movement, the peaceful coexistence of vampires and humans, but its agenda is being undermined by the Sanguinistas (that name! Are you not smiling?), a vampire faction that believes, thanks to a literal interpretation of the vampire bible, that humans are no more than food. “True Blood,” in other words, has a whole new -ism to deal with: fundamentalism. Needless to say, an allegory about Islamist tensions has never been rendered so sacrilegiously.

Among the other things to be appreciative of this season: The endless Sookie-Bill-Eric love triangle has been put on hold following Sookie’s last season decision to pull a Kelly Taylor and choose herself and not either of her dashing vampire suitors, leaving Bill and Eric to bromance each other instead. And then there’s all time lovable ditz Jason Stackhouse finally running up against the limits of what his dick can accomplish; the scene-stealing, sassy vampire Pam making jokes about Walmart sweat suits; and Lafayette still being burdened with that absurdist brujo makeup. If regular guy Terry Bellefleur appears to be off in some dull Iraq war movie/PTSD story line of his very own, well, you can always go to the bathroom when he’s on-screen. When you come back, someone will probably be doing something, uh, interesting.