Trust Me on This: "Abbey Road" 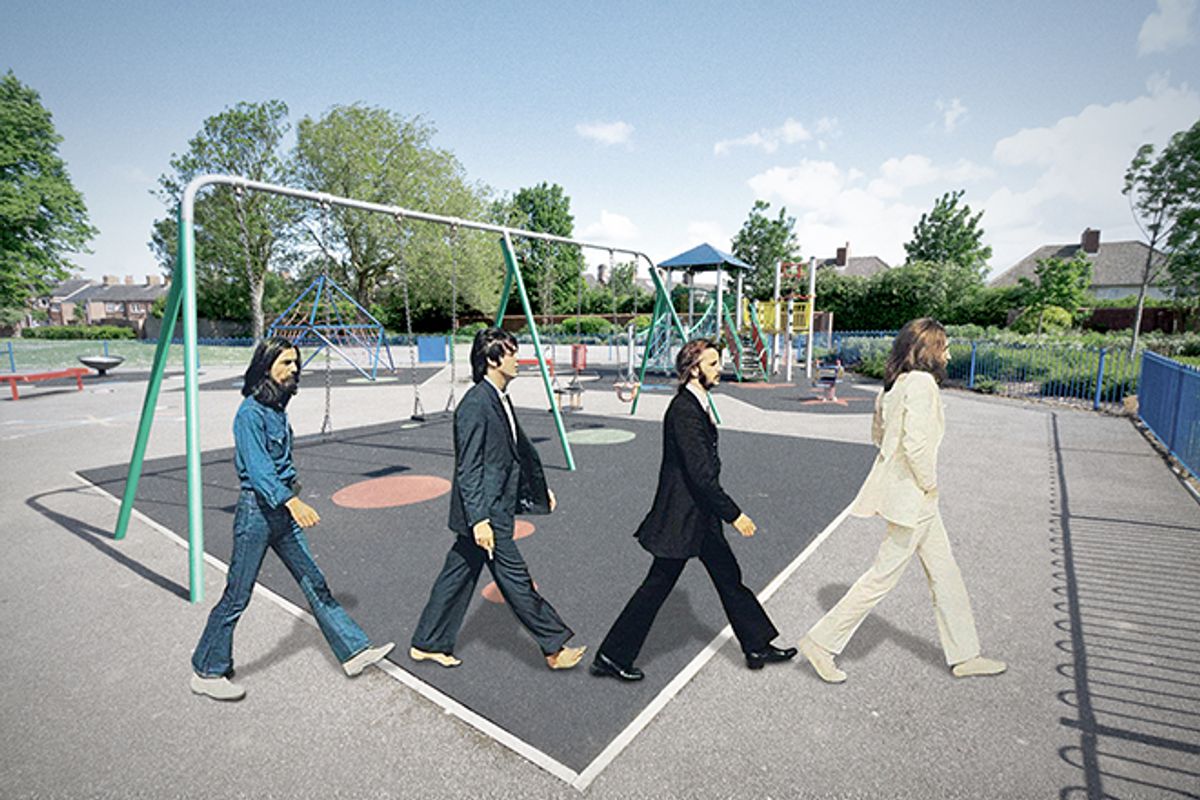 "Abbey Road" has become my 4-year-old’s Rosetta Stone. I really have no idea why; I certainly like the album, but I didn’t foist it upon him, or even really encourage him to listen. It doesn’t pop up on our rotation more or less often than anything else. As best I can remember, he liked the album cover. He liked the four guys walking across the street. He liked what they were wearing -- hilarious that one of them had no shoes. He liked that they looked like they were off to somewhere important. He liked that no cars were going to hit them. And so it went into his bedroom, into a little CD player where it has lived for almost a year. He listens to it as he falls asleep. He listens to it when he’s trying to figure out his socks. He quietly sings it to himself when he thinks no one is listening. He can’t figure out why we don’t want to listen to it in perpetuity in the car.

And the album, it seems, is a launching pad for many of the Kid’s great questions.

Is he mean because mustard is spicy? I don’t like spicy.

What is the weight that the boy is carrying?

Well, sometimes when people are sad about something it feels like a weight.

Will I have to carry a weight?

Were all the Beatles alive when they made "Abbey Road."

What makes a horn French?

The shape, I think.

Then his friend Abbot (a girl, by the way, and 5) overturned his very well-tended apple cart. She said "Abbey Road" was Bad. And in an instant my son was trapped in a huge, frantic, tearful spinout.

And I knew it had started; the inevitable war for status using musical taste. This war was begun in the playground for kids to torture other kids, but very often the war continues deep into adulthood (Pere Ubu vs. the Dead Boys, anybody?). The genius of the attack is that it is violence masquerading as a quest for meritocracy. “Certainly some things are better than other things, right? And really, yes, I am saying you’re an idiot, that’s true, but it’s for your own good. Cry as much as you like, but you need to know these things.”

It’s also unwinnable. When I was playground age and locked in these battles -- “Yes, fine, I will concede that 'Houses of the Holy' is indeed better then 'Zoso'” (which shall not be called Led Zepplin IV, which was last week’s sortie), but then suddenly I’m outflanked by Teddy Feiler and his copy of “Let It Bleed” and I’m toast. The whole thing is somewhere between Ice-Nine and that computer in "War Games." (I’m 47, by the way.)

Interestingly, my wife is absolutely immune to this nightmare. Not because she has attained some higher level of enlightenment, but because she spent much of her youth in the Middle East where she never, ever heard any pop songs of any variety whatsoever. Lots of jazz, lots of classical, but absolutely no “just three chords and speak the truth” stuff. So when she came back to the U.S. for high school and some knucklehead peer tried to provoke her, she blissfully had no idea what the kid was talking about. (This does cause other problems, though. Sometimes she’ll hear some catchy tune, ask what it is, and the group will stare dumbfounded because it’s "Tangled Up in Blue" or something. She’s sort of the Peter Sellers in "Being There" of popular music.)

So when the apple cart exploded, I had the impossible task of trying to lay out a simple plan that would keep him happy for all of his days -- and away from these battles. I started by saying, "Yes, Abbot was probably being a little mean, and that was its own thing, but more importantly -- just because somebody doesn’t like a thing you like, you shouldn’t stop liking it." (I have, at this point, become one of those asinine parents I always prayed I wouldn’t become -- calmly trying to reason with a hysterical 4-year-old). It is possible, I said, that Abbot, as crazy as this may be, doesn't like "Abbey Road." But you still can. I promise. "Abbey Road" was great before we came to the playground, and it is still great now. Please, I’m offering you this amazing Shield of Benign Indifference that will bring you nothing but happiness. Please pick it up. Please.

But looking at him, I knew in my heart the damage was done. He would never again listen to "Abbey Road" without the specter of Abbot’s mocky-mocky face of meanness. No more great questions would spring forth. No more sea cucumbers. I picked him up, grabbed his scooter and went home. We sat on his bed for a while and then he ceremoniously took the CD out of the player and put it back on the shelf.

Then I handed him "Sgt. Pepper." He stared. There the four guys were, but in much better clothes. And who are all those other people, he asked? I ID’d as many as I could (not easy) and he put it in the player.

Are those French horns?

What?! Ringo has two crazy names?!

Actor, writer and director Chris Eigeman starred in Whit Stillman's films "Metropolitan," "Barcelona" and "The Last Days of Disco." His many TV and film credits include "Mr. Jealousy," "The Treatment" and "Maid in Manhattan," as well as "Malcolm in the Middle," "Gilmore Girls" and "Girls." He wrote and directed the film "Turn The River," for which he won the best screenwriter award at the Hamptons International Film Festival. He is also the writer and director of "Midnight Sun," which won the 2011 Film Independent's Sloan Award.