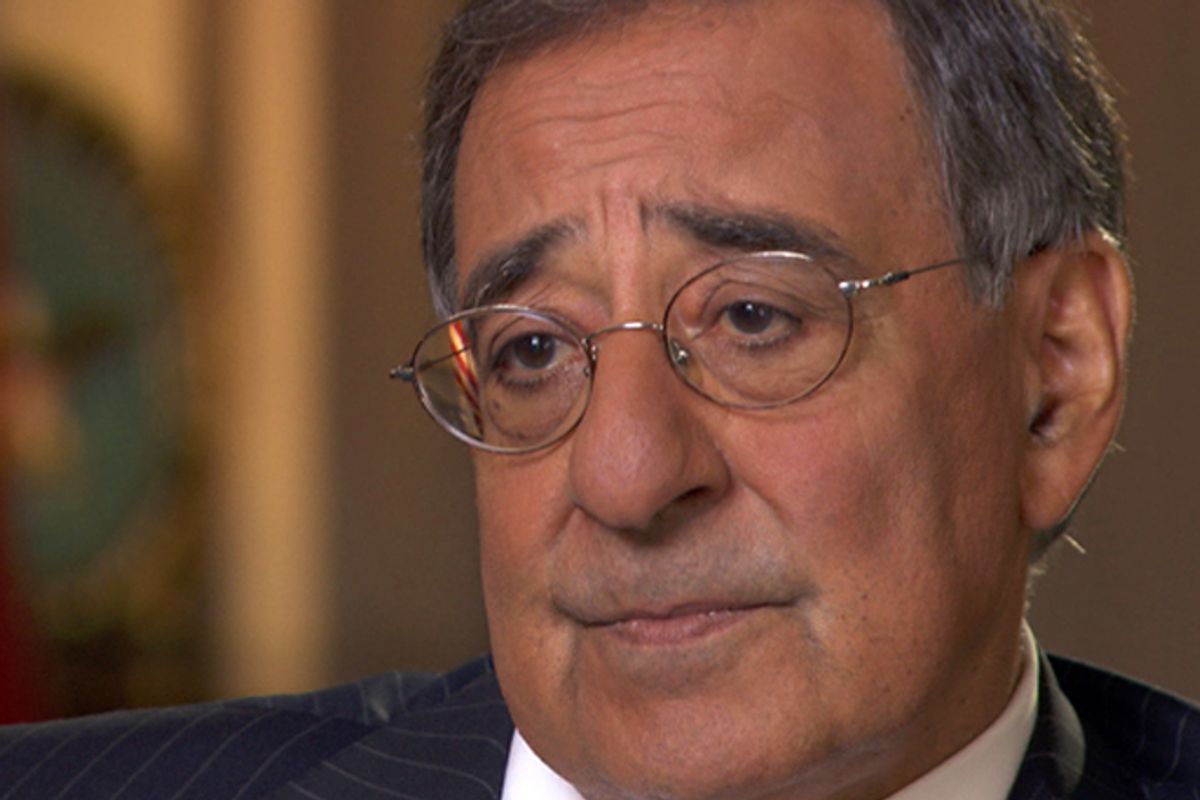 Of all the ways in which America's establishment media lionizes political leaders, none is quite as sycophantic as when it involves military policy and those who implement it. As Chris Hayes recently learned, and as Brian Williams just eagerly exuded: unabashed, uncritical reverence is obligatory in this realm.

And compulsion is hardly required: American journalists naturally swoon with adoration in the presence of shiny medals on uniforms and, especially, war gadgetry. As former military reporter John Parker, now a fellow at the University of Maryland Knight Center for Specialized Journalism-Military Reporting, put it in 2010: reporters covering military leaders "are co-opted by a combination of awe  — interacting so closely with the most powerfully romanticized force of violence in the history of humanity — and the admirable and seductive allure of the sharp, amazingly focused demeanor of highly trained military minds." This awe in the face of America's military machinery means that "reporters in the online/broadcast field have simply given up their watchdog role for the illusion of being a part of power." Remember the era of Rumsfeld: Rock Star Sex Symbol?

Last night, 60 Minutes aired a profile by Scott Pelley of Obama's Defense Secretary and former CIA chief Leon Panetta that is reverent as anything you'll see, as pure as propaganda gets (the video of the full segment is below). Panetta is a top government official presiding over some of the most violent, legally dubious, controversial military and intelligence policies in the world, but there wasn't a single word uttered about any of that. It was, instead, 13 uninterrupted minutes of drooling propaganda: Leon Panetta, the tough-minded, patriotic renaissance man who kills Evil Men to protect us all, and does it all with a heart of gold.

Pelley began by noting that Panetta, despite never having worked in intelligence before becoming CIA Director, "put a Navy SEAL in bin Laden's bedroom." According to Pelley, the job description of the American Pentagon Chief is this: "fighting three wars and stopping Iran from building an atom bomb." Early in the interview, Pelley asked Panetta: "in how many countries are we currently engaged in a shooting war?" After a long pause, Panetta replied: "it's a good question. I'll have to stop and think about that," followed by hearty laughter. After pondering, Panetta ultimately named Pakistan, Yemen, Somalia, and North Africa (Pelley later added that "American and its allies are waging war [on Iran] without sending thousands of troops"). At one point, Panetta, as though he were choosing a meal from a lunch menu, casually though emphatically vowed to go to war against Iran if they "proceed with developing a nuclear weapon." None of these multiple wars or covert attacks or bellicose threats of aggression prompted any challenges or even real questions from Pelley.

Much of the interview consisted of Pelley waxing admiringly over all the James-Bond-looking gadgets on Panetta's plane, or what he called Panetta's "flying command post" (just as Brian Williams, with boyish excitement, pointed out that the White House Situation Room even has a clock that always shows the time of whatever time zone in which the President is found!). Because Panetta's plane is the venue from which the U.S. would launch a nuclear attack, it is called the "Doomsday Plane." As the CBS camera surveyed all of the machinery on the Doomsday Plane with close-ups of the crisply uniformed soldiers operating it, Pelley unleashed my favorite lines:

The Doomsday Plane is laden with secret gear. We can't show you most of it. It's so heavy the Air Force re-fueled it twice in the night's sky over the Atlantic.

It turned out the lightest thing on board: the heart of the man with a world of worry. Leon Panetta is rarely far from an eyelid-collapsing, eye-shaking belly laugh.

And to people around him, it's reassuring: with lives at stake, he stays in touch with his humanity.

And where he came from.

[As Pelley spoke softly about the warrior's humor, humility and humanity, multiple clips were interspersed of a laughing Panetta, a Panetta at play, the fun Panetta, followed by the two of them -- watchdog journalist and Pentagon chief, along with Panetta's other loyal, obedient dog: his Golden Retriever -- intimately strolling together, as they wear obviously coordinated LL Bean outdoor outfits, under the walnut trees on Panetta's childhood farm: it quite resembled the standard montage used in romantic comedies to showcase the rapport rapidly developing between the two romantic leads.]

We then see Panetta at the piano; Panetta's immigrant parents; Panetta talking about the walnut trees on his farm. But then it's back to Business. The segment ends with six straight minutes of now-familiar glorifying narrative about the brave, risky, bold, powerful raid on the bin Laden compound. The CIA gifted Panetta with a brick from bin Laden's house, which he proudly displays in his office, much like George Bush kept Saddam's captured gun in his desk drawer: the trophy fruits of imperial triumph. We then see a smiling Panetta clearing a fighter jet to land on an aircraft carrier and then sitting in the ship's command chair as he wears a commander costume: "fighting more shadow wars then he can count," Pelley narrates.

The segment ends with Panetta sitting gravely at his Pentagon desk, as he explains that the worst part of his job is signing condolence letter to the families of American troops killed in combat. There was, of course, no mention of the thousands of innocent foreigners -- children, women, men -- who have been killed by Panetta's policies. This was propaganda, hagiography -- not journalism -- and that would have spoiled the inspiration, interrupted the uplifting fun. This, by the way, all comes from the show that many Americans have long pointed to as proof that hard-hitting, adversarial, tough journalism exists in the United States.

What amazes me most, I think, is the lack of pretense. There's no effort even to pretend they're doing journalism. They just proudly put it right out there: we're going to spend the next 15 minutes paying homage to your government leaders and their war-fighting machine. Polls consistently show that the U.S. military is now, by far, the most respected American institution. The causal relationship where the media is concerned is ultimately an unanswerable chicken-egg question: is the military so venerated because the U.S. media treats it with religious reverence, or does the media treat it that way because of how venerated it is? Ultimately, that's a self-perpetuating, re-inforcing dynamic.

Whatever else is true, having the military held in such higher esteem than all other American institutions is an obviously dangerous state of affairs for a democracy. Here we have our brave, stalwart, oh-so-adversarial-and-independent media -- as usual -- doing nothing but bolstering orthodoxies, churning out people-pleasing pap, and running in fear. They fantasize that they are the intrepid challengers to power and market themselves that way, yet nobody is more subservient to institutional power than they.

UPDATE: Jonathan Schwarz taps into his encyopledic knowledge of journalist sins to remind me of this classic from Cokie Roberts, on the David Letterman Show in 2001:

I am, I will just confess to you, a total sucker for the guys who stand up with all the ribbons on and stuff, and they say it's true and I'm ready to believe it. We had General Shelton on the show the last day he was chairman of the Joint Chiefs of Staff and I couldn't lift that jacket with all the ribbons and medals. And so when they say stuff, I tend to believe it.

Roberts will be the first to tell you that she's an objective journalist and is part of America's intrepid media that holds the Government accountable. Schwarz also points to this 2008 interview by Pelley with Saddam's American interrogator to demonstrate that his behavior with Panetta is anything but aberrational.