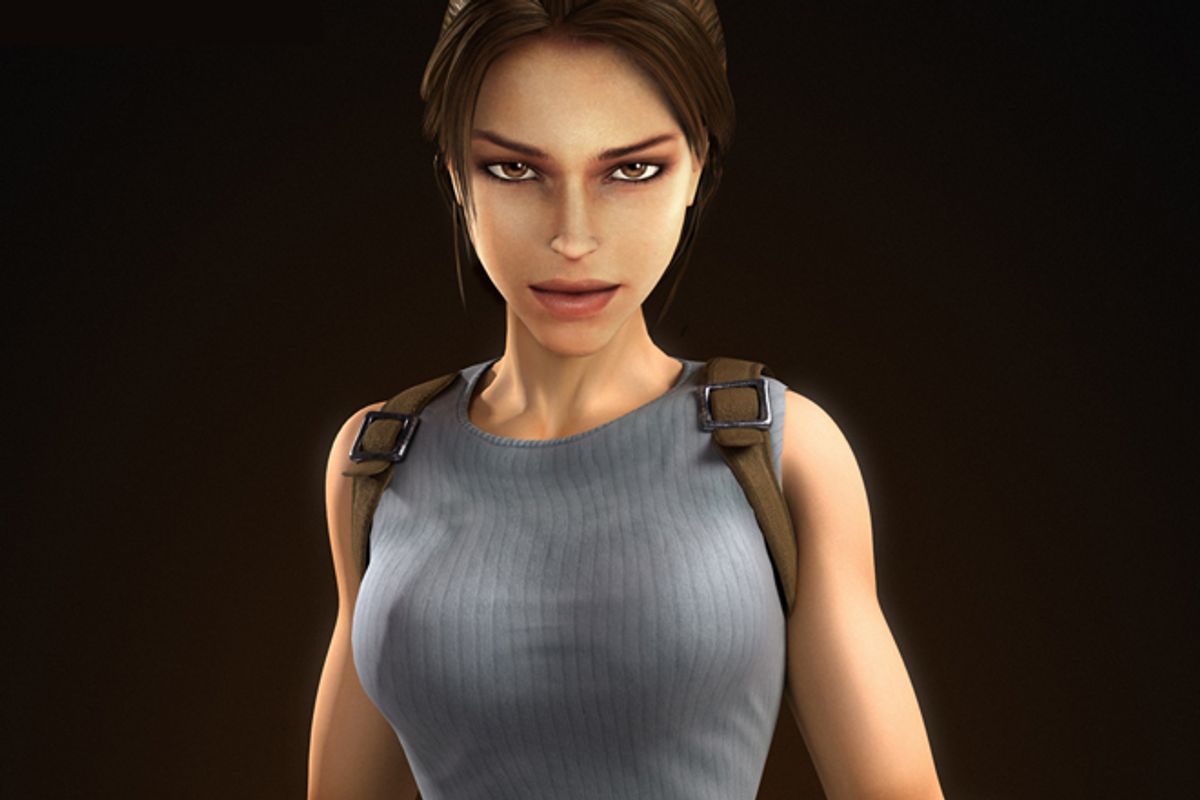 Oh, silly women, both virtual and real: Whatever do you think you're doing in the big strong manly world of video games? You want to see what happens when you step out of your place?

First, there's the matter of the newest incarnation of the butt-kickingest female to ever grace gaming, the lady who's truly a Lady, Lara Croft. Earlier this week, while extolling Lady Croft's toned-down, less va-va-voomy look, Tomb Raider executive producer Ron Rosenberg helpfully explained that "When people play Lara, they don't really project themselves into the character. They're more like, 'I want to protect her.' There's this sort of dynamic of 'I'm going to this adventure with her and trying to protect her.' She's definitely the hero but — you're kind of like her helper."

That's female heroism, circa 2012. Now with extra backpedaling! And part of the way the new version will inspire fans to feel protective of Croft, to see her "as a human," Kotaku's Jason Schreier revealed, is that "She'll get taken prisoner by island scavengers. And then, Rosenberg says, those scavengers will try to rape her." Because nothing makes a girl more likable than seeing her almost get raped.

After a wave of "Are you freaking kidding me?" went up across the land, Crystal Dynamics and its studio head Darrell Gallagher went into hasty butt-covering mode. They issued a statement saying that "One of the character defining moments for Lara in the game, which has incorrectly been referred to as an 'attempted rape scene,' is the content we showed at last year's E3 … where Lara is forced to kill another human for the first time. In this particular section, while there is a threatening undertone in the sequence and surrounding drama, it never goes any further than the scenes that we have already shown publicly. Sexual assault of any kind is categorically not a theme that we cover in this game."

Oh, really? Look, a franchise reimagining itself with an origin story almost always has to show how the hero evolves from ordinary human being to righteous badass. So if early Lara seems to resemble that swoony lady from the opening credits of "Mystery!" we can accept that it's a setup for what is to follow. But take a look at the clip.

While you're at it, go ahead and buck expectations and project yourself into the character. There's an unmistakable sense of sexual menace in the scene Gallagher refers to. Croft's arms are tied behind her back, while her abductor runs his hands over her lasciviously, slowly slipping his fingers down toward her pants. She kicks him in the groin, and he responds not by swatting her away or punching her, but pulling her toward him, pushing his face into her neck. Everything about the way he interacts with Croft says that the threat of violation is present. Everything. If you don't see that, then you really do not get what it's like to be in a situation where you wonder if you're about get raped. If you do see it, you should be disgusted at Crystal Dynamics' tap-dancing around what's going on in that scene, by its denial that it's using the threat of sexual assault to liven up the game. If that's what motivates Lara Croft to kill a man, be honest about it. And give fans credit for understanding that Lara Croft does just fine protecting herself.

Speaking of BS in video games, it just so happens that Anita Sarkeesian this week decided to set up a Kickstarter page to fund her latest project, "Tropes vs. Women in Video Games." Good timing there. Last year, Sarkeesian created a hilarious and unnerving series on Tropes vs. Women for Bitch magazine, including manic pixie dreamgirls, "mystical," forced pregnancies  (a trope featured more recently in one of this summer's blockbusters)  and female superheroes who've "suffered brutal violation."  After the success of her first Tropes project, Sarkeesian wanted to take on the problem "of female characters in video games [who] fall into clichés and stereotypes." She wanted to explore what's going on with the "Fighting F#@k Toys" and "Damsel in Distress," and challenge the industry to create "more interesting, engaging and complex female characters." In other words, she was totally begging to get trolled.

Since announcing her project, Sarkeesian's Wikipedia page was vandalized repeatedly. Her YouTube page was flooded with comments about what a "hypocrite slut" she is from users who make rape jokes, hope she gets cancer, and (upside: "Cancer" spelled correctly) and demand she "Stay the fuck out of videogames." Almost as charming as the comments -- the multiple "likes" they receive. There have also been, she says, "many threatening messages sent through Twitter, Facebook, Kickstarter, email and my own website." You've got to wonder what the hell must have happened to these people in their lives to make them so horrible.

Fortunately, all of this revolting behavior has had some positive side effects. For starters, it's illuminated the real need for projects like Sarkeesian's, and the ways that women are both subtly and overtly demeaned, belittled and threatened whenever they challenge sexism. It demonstrates why Tomb Raider's turning Lara Croft into yet another woman in the refrigerator – and then denying that's exactly what it did – is so insulting and so reprehensible. And best of all, it helped Sarkeesian meet her financial goal. She'd hoped to raise $6,000. She's up to $127,000. Take that, haters. Thankfully, the Internet isn't just full of misogynists and trolls. It's got its share of big damn heroes too. Some of them are even three-dimensional.