Bowing to the CIA, the National Archives says it won't release 1,100 secret assassination documents in 2013 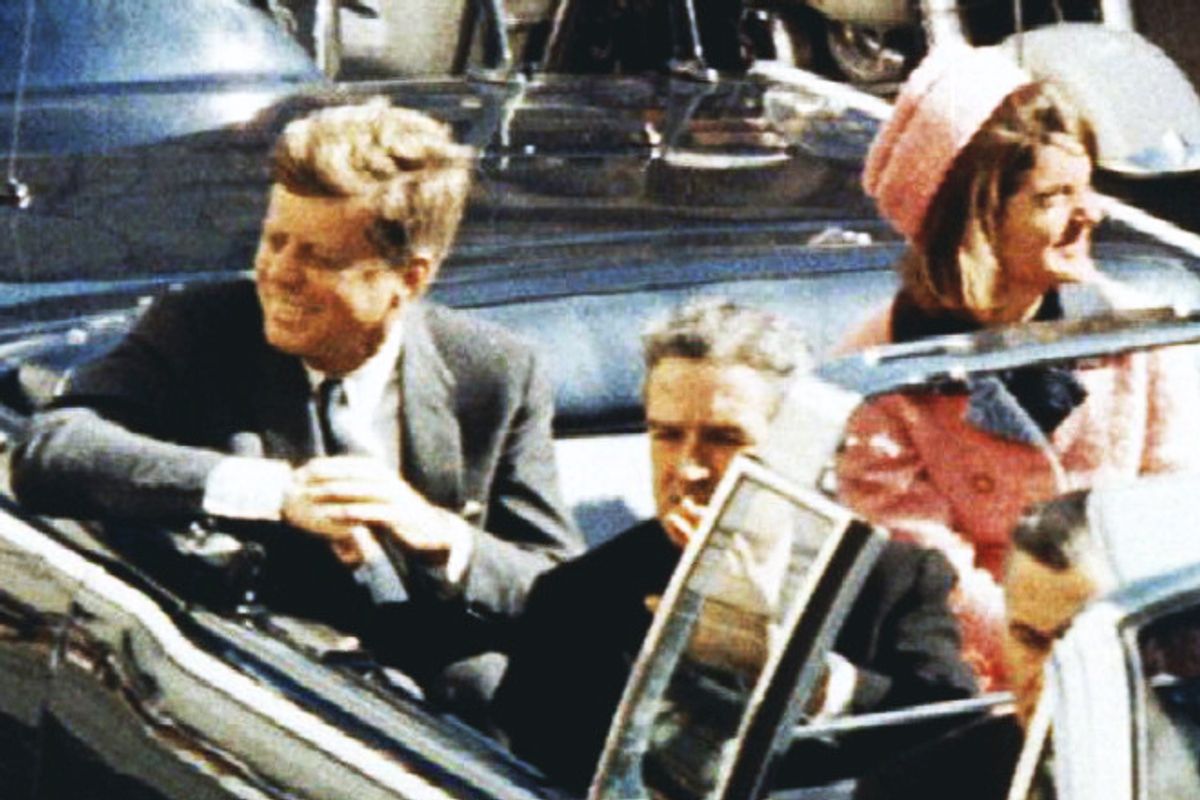 President and Mrs. Kennedy ride through Dallas moments before Kennedy was assassinated on November 22, 1963. (Reuters)
--

Acquiescing to CIA demands for secrecy, the National Archives announced Wednesday that it will not release 1,171 top-secret Agency documents related to the assassination of President Kennedy in time for the 5oth anniversary of JFK's death in November 2013.

"Is the government holding back crucial JFK documents," asked Russ Baker in a WhoWhatWhy piece that Salon published last month. The answer, unfortunately, is yes. In a letter released this week, Gary Stern, general counsel for the National Archives and Record Administration, said the Archives would not release the records as part of the Obama administration's ongoing declassification campaign. Stern cited CIA claims that "substantial logistical requirements" prevented their disclosure next year.

"This is a deeply disappointing decision that deprives everyone of a fuller understanding of the JFK assassination," said Larry Sabato, a political scientist at the University of Virginia, who is writing a book about the impact of JFK's assassination on American politics. "The 50th anniversary of that terrible event is the perfect opportunity to shed more light on the violent removal of a president. This adds to the widely held public suspicion that the government may still be hiding some key facts about President Kennedy's murder."

The records, requested by the nonprofit Assassination Archives and Research Center (AARC), will remain secret until at least 2017, when the 1992 JFK Records Act mandates public release of all assassination files in the government's possession. (Full disclosure: AARC president Jim Lesar is my attorney in a Freedom of Information lawsuit seeking JFK records from the CIA.)

Among those seeking expedited disclosure were Notre Dame Law School professor G. Robert Blakey, who served as chief counsel for Congress' JFK investigation in the late 1970s. In an email he accused the NARA of using “bureaucratic jargon to obfuscate its failure to vindicate the public interest in transparency, a goal touted no less than by the Obama administration. “

"It beggars the imagination to assert that documents (or portions thereof) can only be released in 2017, but not 2013," said independent scholar Max Holland in an email. "I can understand a 100-year argument, in order to protect the identity of confidential sources (say a spy in Castro's Politburo who said he didn't do it); a 100-year rule would protect him or her. But 54  years versus 50? Doesn't make sense ... While it is true that JFK assassination is the most declassified event in U.S. history, in some respects NARA has done a poor job of carrying out the letter, spirit and intent of the JFK Act."

The Archives' decision comes as two former CIA officers have gone public with the unsubstantiated conspiracy theory that Cuban leader Fidel Castro had advance knowledge of JFK's assassination in Dallas on Nov. 22, 1963. In a piece published in the Daily Beast this week, retired CIA officer Glenn Carle claimed that "the Cuban dictator knew of Lee Harvey Oswald’s intention to kill President Kennedy." Carle also defended a deceased CIA colleague, David Phillips, from allegations of JFK conspiracy theorists that he connived in JFK's death.

The still-secret CIA records could clarify the issue. The records include more than 600 pages of material on the career of Phillips, the chief of the Agency's anti-Castro operations in 1963. Phillips oversaw the surveillance of accused assassin Lee Harvey Oswald in Mexico City six weeks before Kennedy was killed. Antonio Veciana, an anti-Castro Cuban who worked for the CIA in the 1960s, told congressional investigators in 1976 that he saw an Agency officer whom he knew as "Maurice Bishop" with Oswald two months before JFK was killed. At the time, the CIA unequivocally denied that Phillips had ever used that name. In the Daily Beast article, Carle, a colleague of Phillips, admitted what the Agency has long denied: that Phillips had used the name "Maurice Bishop."

A CIA spokesman said the Agency declined to comment on Carle's claims.

Phillips, who died in 1988, told conflicting stories about what he knew of Oswald before JFK's murder, but always rejected accusations he was involved in the assassination itself. Phillips may have been sensitive about such allegations because, unbeknownst to JFK investigators, he had been involved in another high-profile political assassination while working for the CIA. In 1999, the nonprofit National Security Archive obtained Agency records revealing that Phillips, as a senior CIA official in 1970, had orchestrated the murder of a Chilean general on behalf of the Nixon White House.

NARA had originally said the 1,171 CIA documents would be reviewed for release. In 2010, assistant archivist Michael Kurtz told a public hearing in Washington that the JFK records would be included in the Obama administration's ongoing declassification campaign.

The idea was popular with the public. As Baker reported, NARA

asked, on its online Open Government Forum, for suggestions from the public about what it could do to create greater transparency. The #1 most popular idea? Get those Kennedy records out—before Nov. 22, 2013, the fiftieth anniversary of the Dallas tragedy.

In his letter to the AARC, Stern said that Kurtz "misspoke." The Archives, he explained, tries "to balance historical impact, public interest, and extent of other government agency involvement [emphasis added] in order to manage government-wide declassification resource constraints as efficiently and effectively as possible."

In this case, the evident public and scholarly interest in JFK disclosure was outweighed by the CIA's desire to keep ancient but still-sensitive records out of public view.

"After five decades it is ridiculous that information is still being withheld from the people whose taxes paid for it," said Sabato.

Ridiculous but true: As the 50th anniversary of the Dallas tragedy approaches, the CIA officials are hiding information about the events that culminated in the death of the liberal president -- and the National Archives is helping them get away with it.