"The Killing" reveals the murderer, at last. Here's your guide if you tuned out early but want to know who did it 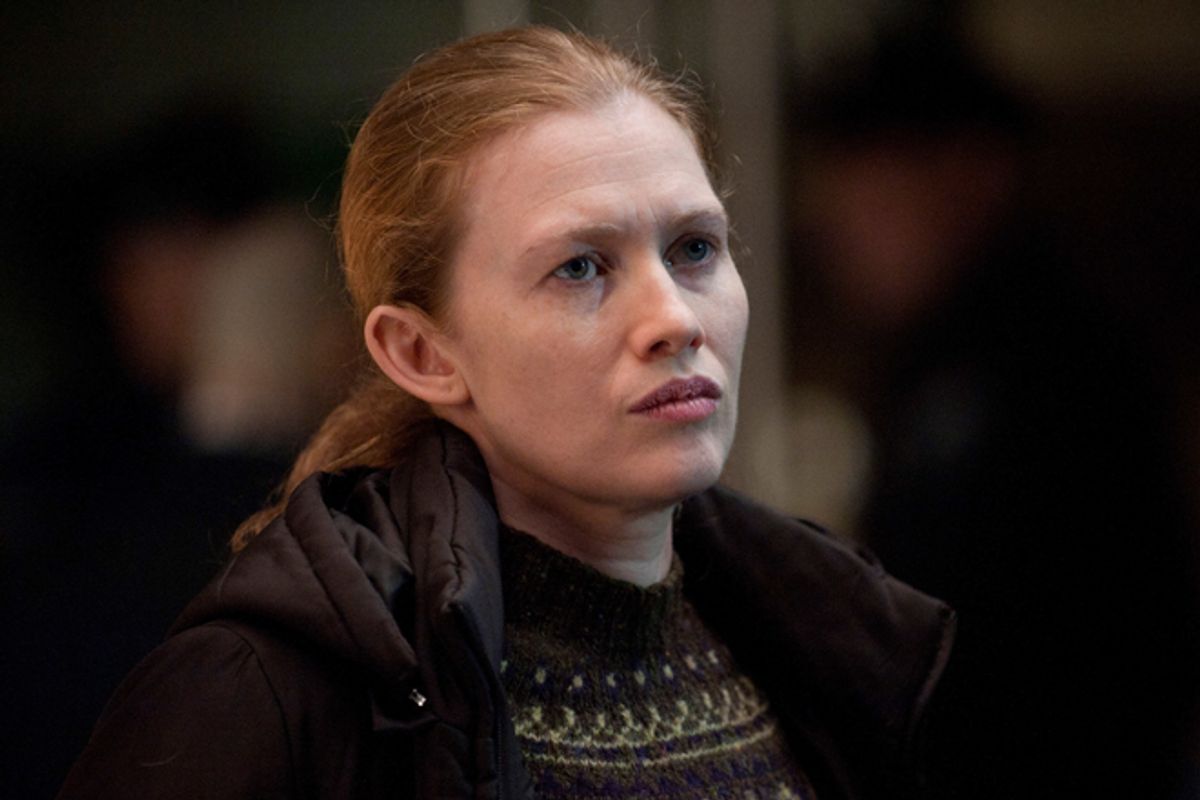 Mireille Enos in "The Killing"
--

On Sunday night, AMC's "The Killing" will finally reveal who killed Rosie Larsen (seriously, they promised). Those who have been diligently watching all season long -- through the false leads, nervous breakdowns, brutal beatdowns and unceasing Seattle rain -- are totally caught up on how the murder of a teenage girl turned out just to be a part of a vast political conspiracy. It took some convoluted and increasingly unhinged detective work from Linden and her homeboy partner Holder to figure this out. But we'll make it easy: What follows is a "Killing" cheat sheet for those viewers who are interested enough in the identity of Rosie's killer to watch the finale, but perhaps gave up after the fiasco of Season 1. Here's what you need to know to make sense of the finale, without having watched the entire second season.

So, at the end of last season, it was revealed that big-time suspect and mayoral candidate Darren Richmond probably didn’t kill Rosie, because the photo evidence implicating him was fake. But how do we know for sure he didn’t do it?

Well, at the time of Rosie’s murder, Richmond was jumping off a bridge, grieving for his wife, but he was too worried about what a suicide attempt might do to his political career to tell anyone. So he got shot instead.

Has he recovered from the shooting?

He’s paralyzed from the waist down, but in less than a week he was back on the campaign trail, shooting hoops and making "viral videos."

Not so good. He killed himself, at the police station in front of Holder.

Holder was the one who brought the faked photo of Richmond to Linden, before taking a very suspicious car ride at the end of Season 1. Is he dirty?

No, just impatient. When he passed along the photo, he thought Richmond had really killed Rosie, and he was willing to use fake evidence to nail him. He feels bad about it.

So who did Holder get the photo from?

So … who killed Rosie?

Well, who are the suspects going into this last episode?

Here’s what Linden and Holder have “detected” thus far. Rosie was, as they suspected, abducted from the Indian casino, where she was working not as a prostitute, but as a maid. Rosie, who was really mad at her parents …

Why was she really mad at her parents?

Stan Larsen is not her biological father, and she found out.

Probably not. So Rosie was really mad at her parents and ready to run away to go see the butterflies in California — that’s not a metaphor — but she wanted to say goodbye to Seattle before she did. So she went back to the casino one night, to enjoy the great view from the balcony on the under-construction 10th floor. While she was up there, she saw a meeting she should not have, got beaten up, abducted and eventually killed.

So her death has nothing to do with her, she was just in the wrong place at the wrong time?

So what was the meeting that she overheard about?

Well, the night of Rosie’s death, there had been a break-in at the construction site for the mayor’s waterfront project, a development that is key to his reelection. The man overseeing the construction site, Michael Ames, told the police to let the guy who had broken in go. Turns out the break-in guy worked for the mob — specifically for Kovarsky, the mobster Stan Larsen worked for back in the day — and he had been hired to plant Indian bones on the site. So it looks like the Indians, this Ames guys, and maybe even Kovarsky were all trying to derail the mayor’s waterfront project, but when the guy got arrested, they got nervous and called this meeting at the casino.

Who was at the meeting?

Chief Nicole Jackson, who runs the casino and the reservation and is a horrible person who regularly breaks her girlfriend's hands and had Holder nearly beaten to death, and Ames, who is also the father of that snot-nose teenager we met in the first season, Jasper, and was having an affair with Terry ...

Rosie’s aunt, Mitch’s sister, the chick who worked for beau soleil, and who spent most of this season taking care of Mitch’s sons.

Maybe. A few months ago someone sent Ames a text message from Rosie’s phone blackmailing him for $5,000, possibly about the affair. Jasper recently said he did it, but it would have given Ames reason not to like Rosie that much. In any event, Rosie seemed scared of Ames before she died.

So Ames and Jackson. Who else was at the meeting?

Well, this is the part that Holder and Linden are so excited about: Jamie Wright, Richmond’s really dedicated, asexual aide, who should not have been there. But not only was he there, he left his city hall key card, covered in Rosie’s blood, on the 10th floor.

So he killed Rosie?

Except that he seemed like the major suspect going into the finale, which means, by TV logic laws, it probably wasn’t him.

Is there anything else I need to know?

Yes! Back in Episode 5, hoping to raise a sad, paralyzed Darren’s spirits, Jamie told Darren about his grandfather, a guy named Ted Wright, who had a factory accident, and then lost “everything else.” But Ted had fortitude and he got "everything" back, proving that bad luck can destroy a man, or “show a man who he really is.” Darren was really taken with this story, and repeated it in at least three more episodes and in various televised appearances. At the end of last week's episode, Darren got a call from a threatening guy who needed to see him immediately. Darren drove over to see him and … it was Ted Wright. And then Jamie came charging in because his grandfather had called him over too, and Darren was all, “Jamie, why did you lie to me.”

So Jamie’s grandfather, whom we have never met before and prior to last week's episode was just the source of some Hallmark card-level platitudes, now seems to have had something to do with Rosie’s death?

Look, teenage girls, wise, shady grandpas — you never know who is going to be caught up in a vast conspiracy that, in the words of Holder, goes "all the way to the top."

OK, is there anything else I need to know?

Linden and Holder have tossed around the theory that there’s more than one killer, because the killing seems really  “masculine” in some parts and really “feminine” in others. Someone hunted Rosie through the woods for hours, but then someone, maybe not the same someone, put her in the trunk of a car while she was still alive and drowned her, rather than murder her directly.

Is there anything else that I don’t need to know?

Oh, so much. Holder and Linden thought that Gwen, Richmond's staffer and ex-girlfriend, might be the killer, and though they don't for the moment, she doesn’t have an alibi. Also, Mayor Adams kissed Gwen, inappropriately, when she was only 14, a piece of information she seems ready to use as blackmail now. Kovarsky, the mob guy, just got whacked, but not by Stan, even though Kovarsky had recently asked Stan to kill a guy for him. The teenager who did Kovarsky was the season's biggest red-herring, and so better you know nothing more about him. Stan’s probably going to jail for three to five years for beating up that suspect from last season, Bennet Ahmed. Linden, who is a really bad mom and is really losing it over this Larsen case, finally sent her son to Chicago to be with his father. Luckily that happened before she was put in a mental hospital, but not before she had to turn in her badge. Oh, and the most important-least important thing of all: Holder appears to make really outstanding breakfast burritos.