Pick of the week: Can sitting in a chair be art?

Pick of the week: An art-world rebel turns unlikely celebrity in "Marina Abramović: The Artist Is Present" 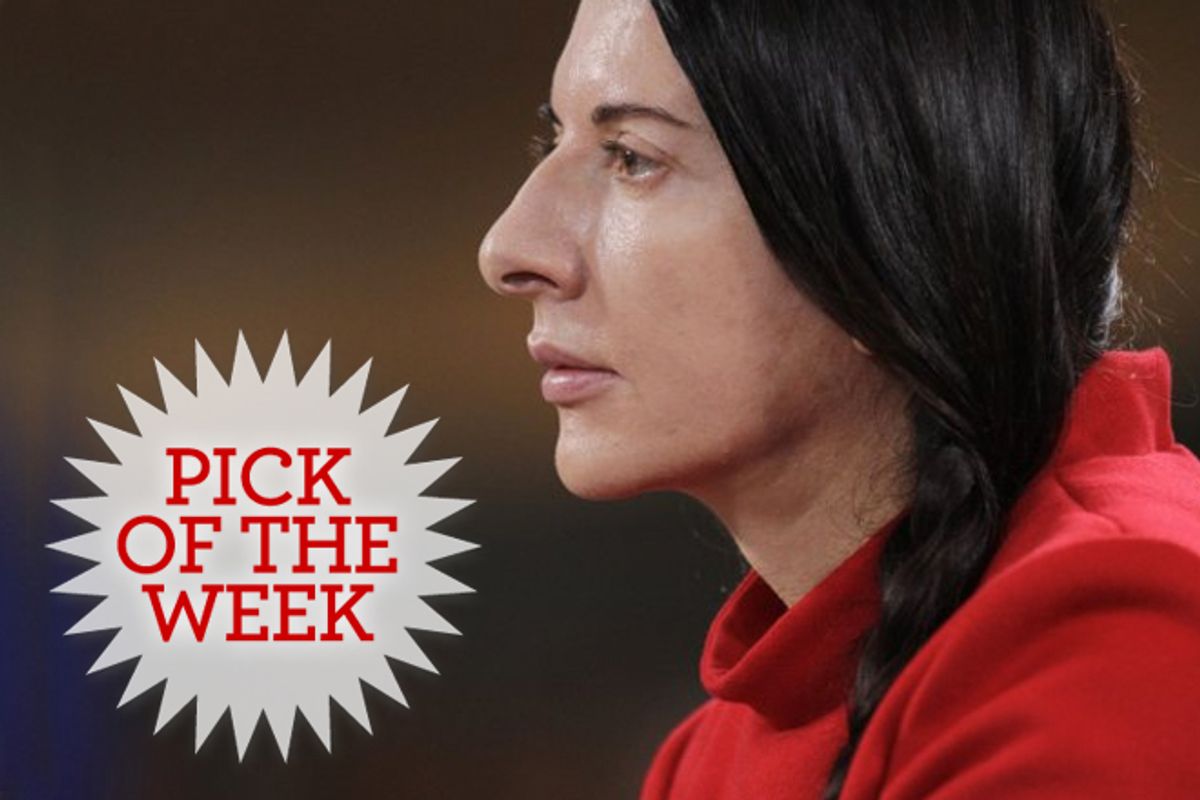 Partway through Matthew Akers' documentary "Marina Abramović: The Artist Is Present," the eponymous performance artist dryly tells a nervous German interviewer that he has asked her all the usual questions, "except for the one about 'Why is this art?'" Everyone now knows the answer to that, she goes on, or at least pretends that they do. "I used to hate that question, but now I kind of miss it."

Indeed, I think it remains a highly relevant question, and the most normal one for anyone encountering Abramović's work for the first time to ask. One of the beauties of Akers' moving and memorable film is that it answers that question better than any art-world documentary I've ever seen. If you come to the movie with an open mind, you will come away utterly convinced about the craft, discipline and intention that this striking, statuesque and undeniably charismatic woman, now in her early 60s, brings to what she does. Which involves, in the case of her now-legendary 2010 exhibition at the Museum of Modern Art in New York (which had the same title as this film), sitting in a chair without moving for seven-and-a-half hours a day, six days a week. For almost four months.

Over the course of that show, Abramović became something that seems wildly unlikely, at least when you consider her origins in the Central European avant-garde gallery scene of the 1970s: a cult figure, maybe even a celebrity. Museumgoers were invited, one at a time, to sit in the chair opposite hers for as long as they liked; there was no talking or touching, and (with occasional exceptions) no gestures exchanged. But Abramović stared everyone in the face, usually for minutes at a time. Most often she looked grave and serious, but sometimes she smiled and occasionally she cried. That began to happen to her visitors too, more and more as the weeks went by.

What began as an ambitious experiment mainly of interest to art-world cognoscenti -- some of whom doubted that Abramović could physically or psychologically stand the strain of all that sitting -- became something else, a bona fide Manhattan craze. People came from all over the world to watch her for hours, or to take their turn in the opposite chair, first by the thousands and then by the tens of thousands. MOMA says the Abramović show drew 750,000 visitors overall, but no one is sure how many people actually sat with her. (Simple arithmetic -- she was in the chair for about 736 hours -- suggests that it was likely less than one-tenth of that number.) She was demonized on Fox News as some sort of pornographic "Yugoslavian-born provocateur," which was, needless to say, very good for business.

To put it in grotesque marketing terms, Abramović had stumbled, whether intentionally or not, on exactly the kind of counterprogramming craved by overcaffeinated and technology-buzzed 21st-century New Yorkers. As the German-born performance artist Ulay, who spent many years as Abramović's lover and collaborator, explains to Akers' camera, her work emphasizes things that are anathema in Western culture, but which we therefore long for: inaction, silence and fasting. During Abramović's hours in the chair, she neither ate, drank nor used the bathroom -- but compared to some of her previous performances, that was child's play. Ulay recalls a similar work from the '80s when the two of them sat opposite each other in a gallery without moving or eating for two full weeks. (He quit at that point, having lost so much weight that his ribs were crushing his spleen; she pushed on for 19 days.)

Akers' film is at its best in capturing the weird, almost religious atmosphere of Abramović's MOMA show, which became a peculiar combination of group Zen meditation and neo-medieval saint worship. Those comparisons turn out to be oddly perfect; as Abramović explains, she was the child of World War II heroes, leading figures in the Yugoslav dictator Tito's Communist inner circle, but was largely raised by her extremely religious grandmother. (Her great-uncle was Patriarch Varnava, leader of the Serbian Orthodox Church in the 1930s.) This combination of influences -- stern military discipline and fervent spirituality -- goes a long way toward explaining Abramović's life and work.

There's also a lot of fascinating background material in "Marina Abramović: The Artist Is Present," including her uneasy reunion with Ulay after many years apart, or her training camp in New York's rural Hudson Valley for the young artists she has recruited to perform some of her older works in the MOMA show. (The one that got Fox News excited involved a narrow "human archway" composed of a nude couple -- sometimes of opposite sexes, sometimes the same sex -- between whom museum visitors had to wedge themselves to enter the show.) It's difficult, if not impossible, to summarize Abramović's 30-odd years on the experimental fringes of the art world, and her recent turn toward theater and high fashion, in a 105-minute film that's mostly about the present. But Akers does deliver some sense of the ways in which she has used the human body -- first and foremost her own -- as a zone of contemplation and confrontation.

But is it art? It's not a trick question, I promise; you don't have to be a Philistine to confess that you don't know the answer. Since the days of Marcel Duchamp, it's been well established within the fine art world that art is about ideas more than things, but in the normal course of events most people don't see it that way. Artists like Abramović and Ulay set out, some decades ago, to smash the idea that art could be embodied in some inert object, a painting or sculpture that rich people could buy and display in their Vegas condos or Italian villas. But commodity fetishism always finds a way back in; Abramović has grown rich from performance fees and limited-edition photo books based on her shows, and the chance to commune with her in MOMA became a mark of ultimate coolness, not unlike a night at Studio 54 with Andy Warhol, way back when. (Did James Franco have to wait in line with regular people for his shot at Marina? I'd really like to know.)

I think the answer I came away with after watching this thoroughly engrossing film, so alive to the hypnotic power and innate contradictions of its subject, is that you and I could not possibly do what Abramović does, and that what drives her is the kind of passionate obsession for which we usually reserve the magic word "art." But if you want to call it a feat of athletic endurance or a religious spectacle -- or even, more judgmentally, some species of collective delusion -- you're just applying different semiotic labels to the same phenomenon, a logic-defying transcendental experience of exactly the kind that seemingly makes our species unique. Whatever you make of Marina Abramović, Akers' film about her is an unquestioned and triumphant work of art, one that delivers the undeniably challenging work of an aesthetic pioneer in warm and human terms.

"Marina Abramović: The Artist Is Present" is now playing at Film Forum in New York and the Nuart Theatre in Los Angeles. It opens July 4 at the CCA Santa Fe Cinematheque in Santa Fe, N.M., and July 6 at the San Francisco Film Society, with other cities to follow. HBO will also broadcast the film, beginning July 2.