The most liberal and conservative senators join together to demand a harder line, and more threats, against Iran 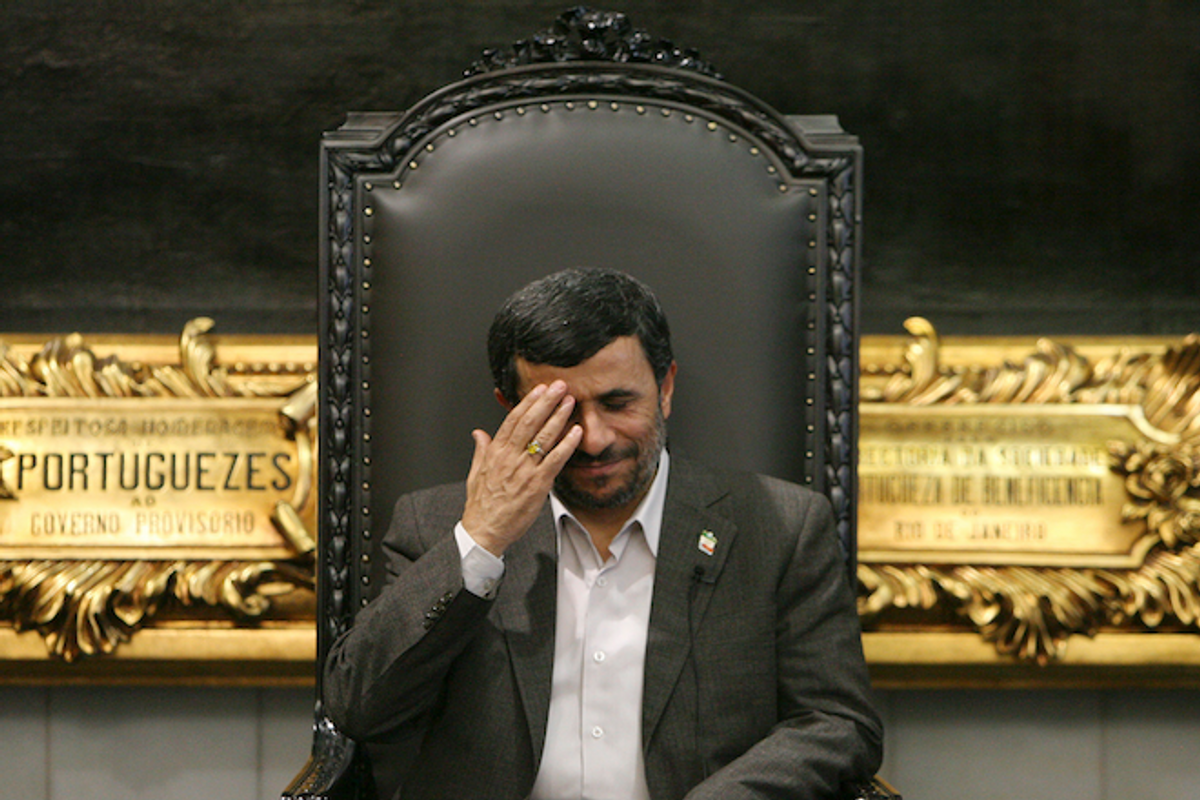 Several days ago, a letter was sent to President Obama urging a harder-line on Iran, including ever-harsher sanctions and more aggressive threats of war in the event that the current negotiations fail to produce a quick and total resolution. What makes the letter notable is that it was not sent by AIPAC (at least not nominally), but rather by 44 Senators, exactly half of whom (22) are Democrats. That includes liberal Senate stalwarts such as Ron Wyden, Jeff Merkley, and Sherrod Brown. Here is the supremely hawkish essence of their letter:

This implication is clear: a military attack by the U.S. on Iran is at least justified, if not compelled, if a satisfactory agreement is not quickly reached regarding Iran's nuclear program. At the same time, the letter itself virtually ensures no such agreement is possible because the conditions it imposes as the "absolute minimum" are ones everyone knows Iran will never agree to (closing the Fordow facility and giving up its right to enrich uranium above 5 percent). It also declares that it is not only Iran's possession of a nuclear weapon that is "unacceptable" -- diplomatic code for "we'll go to war to stop it" -- but its mere "capability" to build one.

Note, too, the Iraq-War-replicating framework that it is Iran's burden to prove that they are peaceful rather than the aggressor-parties' burden to prove they are doing something wrong. While the signatories to this letter would undoubtedly claim that they are advocating these harsh sanctions and threats in order to maximize the chances for a diplomatic resolution -- and they say they think Tehran will only agree if they know sanctions will be "both unremitting and crippling" -- they presumably intend for these presidential threats that they are demanding to be something other than a bluff.

The substance of all of this has been extensively debated, so let's take note of the political implications. Is there any doubt that a proposed military attack on Iran would quickly and easily command support from the leadership of both parties, just as the attack on Iraq did? In fact, given the more direct role of Israel here, the consensus for attacking Iran would be almost certainly stronger and more bipartisan than even the Iraq War generated. Here we have almost half of the U.S. Senate -- liberals, moderates and conservatives -- jointly demanding an escalation with Iran and all but endorsing a war before the U.S. Government even proposes one.

Has the American political and media class learned a single lesson from the Iraq debacle? Certainly no lessons were learned from the sanctions regime imposed on Saddam, which strengthened his hold on power while causing mass suffering for Iraqi citizens, suffering that intensified anti-American hatred and the threat of Terrorism. If the Executive Branch did decide that a war with Iran was desirable -- either fighting it directly or aiding Israel -- would a single thing be different as compared to what happened in 2002 and 2003? This letter strongly suggests that it would not.

What's most notable is how suffocatingly narrow the permitted views are in the U.S. on this question. Just today, Israel's former Mossad Chief Meir Dagan warned -- again -- that an attack on Iran would be entirely counter-productive, as it would only strengthen the Iranian regime without stopping the program: but that view, the one of the former Mossad chief, is basically unmentionable in the U.S. Senate. In USA Today, Kenneth Waltz argues that a nuclear-armed Iran "would probably be the best possible result of the standoff and the one most likely to restore stability to the Middle East," a view that you will never, ever hear emanate from the U.S. Senate.

What we have, instead, is -- as usual -- virtually absolute bipartisan consensus on the most consequential foreign policy issues. This is precisely what Robert Kagan in Foreign Policy meant in 2010 when he pointed out that there is little partisan difference between the parties ("precious little now separates Barack Obama from most Republican leaders in and out of Congress"), and what Aaron David Miller meant when he argued the same thing earlier this month in the same journal ("the United States has a bipartisan — even nonpartisan — consensus on many of the core issues relating to the country’s foreign policy"). Daniel Larison, who thinks Miller overstates the extent of the bipartisan foreign policy consensus, acknowledges that "on anti-terrorism, Iran, and the 'Arab Spring,' Miller seems to have a fair point. Romney and Obama do not disagree on these things in any meaningful way."

At the moment, it does seem that the Obama White House and the military establishment are reluctant (for different reasons) to have the U.S. involved in a war with Iran, though as The Atlantic's Robert Wright argues, Obama has clearly put himself on the AIPAC-blazed trail where such a war seems likely. And if it does happen, it's virtually impossible to imagine any real debate over whether Iran should be attacked; as this latest Senate letter reflects, the parties' leadership, if anything, will be even more hawkish than the President.

In his ongoing effort to prove that there is some vast foreign policy difference between Obama and Romney, Andrew Sullivan today claims that Romney is actually to the Right of George W. Bush because Romney now says that an attack on Iran would not require Congressional approval. While that claim is indeed radical and absurd, let's recall that Romney previously said that he would consult with administration lawyers before making that decision, and was promptly mocked by top Obama campaign aide Stephanie Cutter as a weakling and loser ("he said he’d have to check with his lawyers. That does not make a Commander-in-Chief, somebody who has to check with his lawyers"). It's also worth recalling that Obama himself has proven, in Libya, that he's perfectly willing to fight a war even once Congress votes against its authorization. Andrew also notes that Romney has said that "we cannot survive a course of action [that] would include a nuclear Iran"; that is indeed ludicrous, and it would be really significant if not for the fact that it basically tracks the bipartisan position that war with Iran is justified and necessary if they even appear to be acquiring a nuclear weapon (Leon Panetta has gone even a bit further than that).

The reality is that, on the level of Iran policy (as opposed to rhetoric), there is very little disagreement in Washington. Nobody with any establishment platform questions America's right to attack Iran in the event the U.S. decides that doing so is necessary to stop it from obtaining a nuclear weapon (indeed, almost nobody questions America's right to attack even if it's in response to a mere Iranian capability). Very few question the wisdom of doing so. That's why the most liberal politicians find fully common cause with the most conservative. As usual, there is far less permitted debate and diversity of opinion on these questions in the U.S. than just about anywhere else in the Western world.