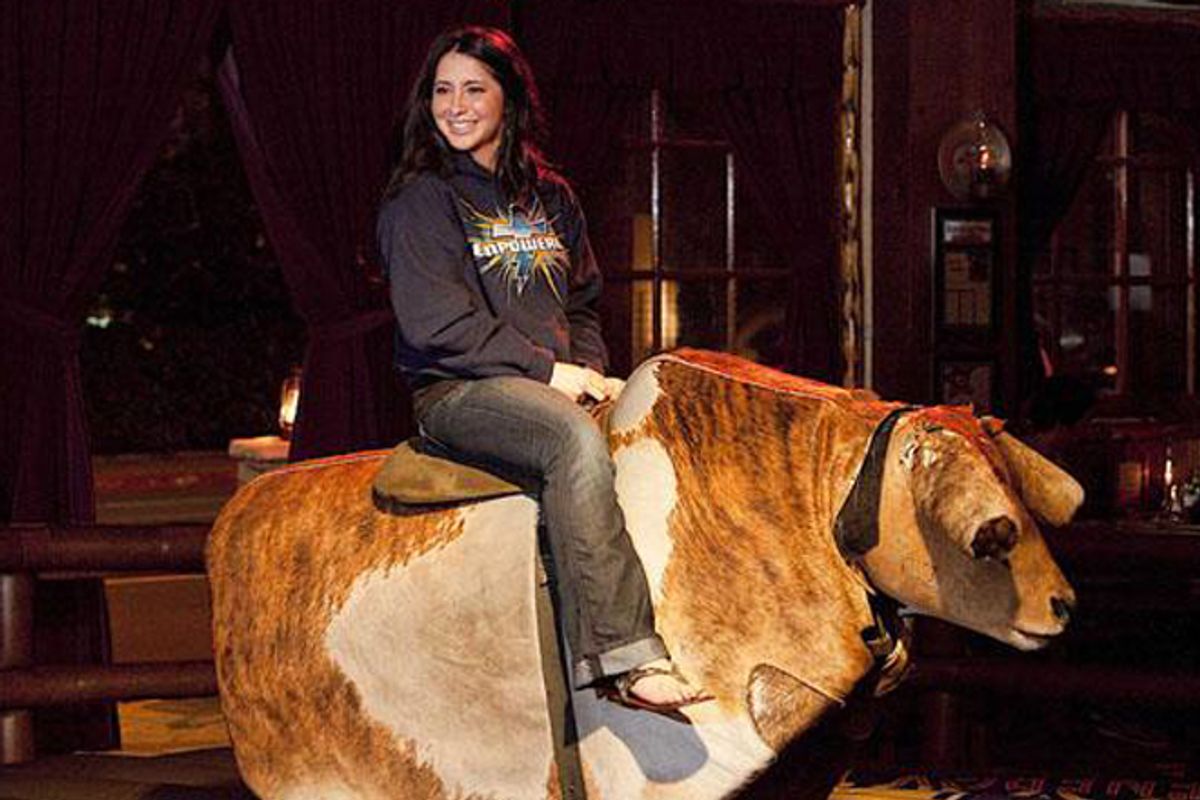 At the end of the first episode of Bristol Palin’s new reality show, “Life’s a Tripp” (which premieres tonight on Lifetime), Palin and two friends find themselves at an L.A. bar with a mechanical bull. Bristol, her son, Tripp, and her younger sister Willow have recently moved from Wasilla, Alaska, to a mansion in Beverly Hills full of bidets, so that Bristol can “work” for a charity. (She does volunteer, but it seems clear it was her reality show, not her job, that precipitated the move to SoCal.) On this night Willow’s watching Tripp, and the 20-year-old, giggling, cheerful Bristol, feeling “like a kid again,” rides the bull, as everyone in the bar takes pictures. She gets thrown, and as she picks herself off the mats, a stranger yells out, “Did you ride Levi like that? Your mother’s a whore!”

Up until this point, “Life’s a Tripp” has been a standard reality show about Palin’s experiences as a single mother -- if Sarah Palin and her impression of the “Beverly Hillbillies” theme song regularly popped up in a show like “Teen Mom.” Bristol has the same glassy, anodyne good looks and manner as anyone who ever starred on ‘The Hills," and the same knack for plodding conversations with lots of awkward silences and expository questioning. But her blond son looks like a cherub, her stubborn sister Willow is one of TV’s surliest sidekicks, and Sarah Palin drops in every few minutes to suck up all the oxygen in the conversation. Also, Bristol seems pleasantly committed to both her child and wearing hoodies and other garments on Alaska’s, not L.A.’s, cutting edge.  But the bar fight — which made the rounds of the Internet this past September — elevates the series’s voyeuristic satisfactions to the next level.

Palin goes over to the heckler, a 47-year-old man, as he continues to scream at her. “She’s the devil," he yells. Palin, who later says things like this happen to her all the time, seems trained to stay calm: “What’d she do wrong?” The heckler replies, “She lives, she breathes.” “Give me one reason you don’t like her,” Palin counters. “She’s evil. If there’s a hell — which I don’t believe in — she will be there.” “OK, why is that?” Palin asks. “She's evil. She's evil,” is the reply.

Up until this point, my sympathy was with the composed Palin. Sarah Palin may be a lot of things, but a whore actually isn’t one of them, and even if it were, it’s unconscionably crappy to yell that in her child’s face. Plus, any heckler who can’t come up with a concrete reason to hate Sarah Palin is like the Sarah Palin of hecklers — inexcusably unprepared. But then Bristol Palin upends the conversation, freezes my good will, and turns “Bristol Palin: Life’s a Tripp” into must-see reality TV. She asks the guy if the reason he hates her mother is “because you’re a homosexual?”

Reality TV shows are hardly, if ever, like life. They are scripted and choreographed, curated and voiced over, buffed and glossed, but this exchange seems rawer than a freshly gunned-down caribou. The question had my prejudice-sense tingling, but the man fires back, “Pretty much!” before calling her white trash. Later, sobbing in the parking lot, Palin tells a friend, “He only hates [my mom] because she doesn’t support gay marriage,” which may or may not be true.  The whole incident — much more than the move to L.A. to film a reality TV show or her trials as a young single mom — is a window onto Bristol’s genuinely strange life, wherein her bigotry is constantly reaffirmed because men screeching at her in bars will, on occasion, agree with her that they hate her mother because they are gay.

The next morning, shopping for groceries with her little sister and talking about how the fight is making its way around the Internet, Palin says she’s “over it.” She may be, but I’m not.