Run for my life!

Can you outrun disease? Maybe -- in the middle of my cancer fight, I never thought I'd be training for a marathon 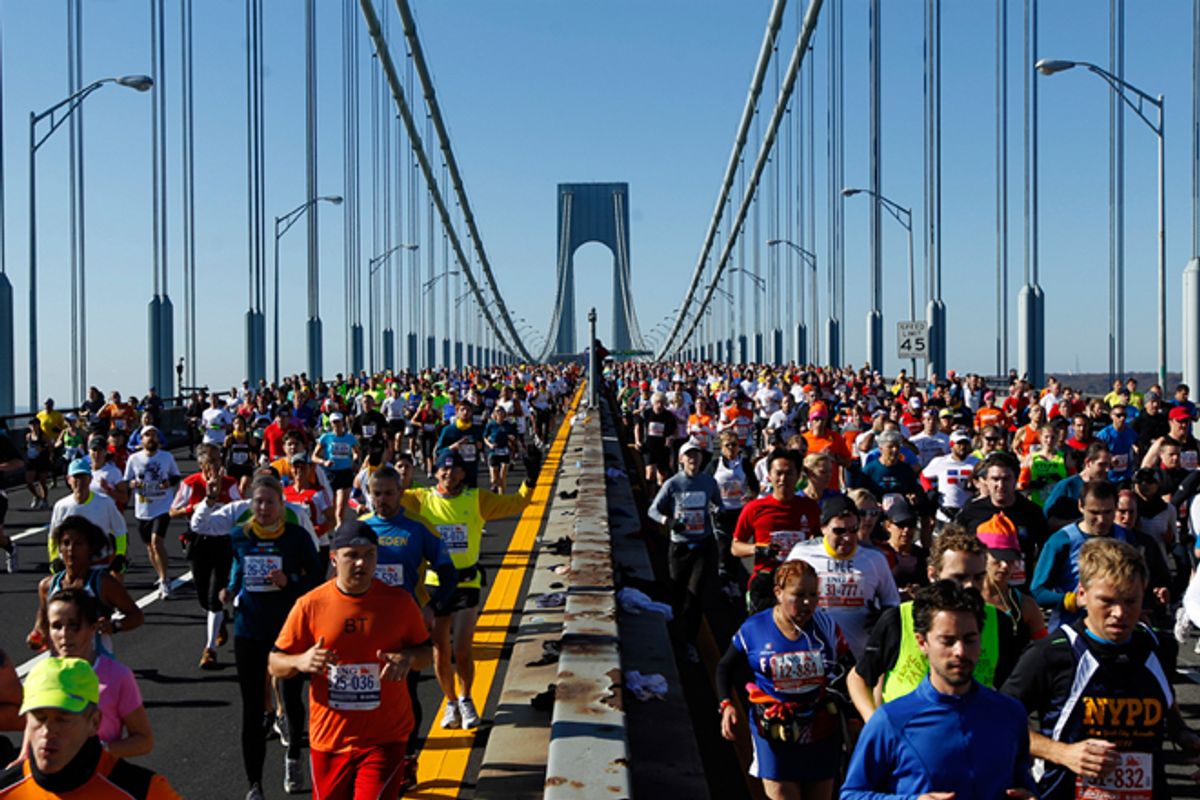 Runners cross the Verrazano-Narrows Bridge after the start of the New York City Marathon. (Reuters/Brendan McDermid)
--

Blame it on Pheidippides. Legend says that sometime around 490 B.C., the Greek herald ran over two dozen miles from the town of Marathon to Athens to announce his city's victory over Persia in battle. He then dropped dead. Somehow, this story has inspired people ever since.

Some 2,500 years after the jog that launched a million shin splints, marathoning has gone from heroic journey to commonplace event. There are almost 500 marathons each year in the U.S. alone. In 2011, well over half a million people finished marathons – and those numbers keep multiplying, just like all those "26.2" stickers on the bumpers of Priuses. Suddenly, it seems everybody's getting the urge to go the distance. Including, to my great surprise, me.

I'd certainly never envisioned myself in these Asics. Though I've been running almost daily for years, until recently I've rarely gone beyond five miles at a time -- and never felt the urge to. In fact, for the last several months, as I've endured the physical and emotional butt-kicking of a phase 1 clinical trial for cancer treatment, most days it's been a struggle just to get out of bed, let alone plod laps around the park. Yet as difficult as my runs throughout my treatment have been, they've also been incredibly sustaining. The days when my health situation seemed most terrifying, when my side effects were most intense, I channeled it all into my feet, convinced that as long as I could move forward, I could outrun my disease. That I could outrun death itself.

So when the primary part of treatment ended this spring and a modicum of my energy returned, I began thinking of how I needed to mark the rite of passage. And then, at a luncheon for Gilda's Club, the organization that has helped and supported my family and me through so much of my cancer, I heard that they were beginning to organize their 2012 New York City marathon team. When I floated the idea to my doctor, his response was "Go for it." And so, before I could wuss out, I had signed up and was training. I've got a ridiculous amount of company.

Last year, almost 47,000 people ran in the ING NYC marathon – and that number represents only 15 percent of the applicants. It has become such a hot ticket that this year the NYC marathon both tightened its eligibility requirements and mulled adding a whole second race just to accommodate the demand. Boston has also tightened its requirements for racers – yet last year when it opened for applicants, every spot was gone in eight hours.

Why the surge in popularity? Much of it may well have to do with the fact that marathoning – as well as half marathoning, which is similarly booming -- is an ideal pursuit for uncertain times. As my team's coach Claire Shorenstein says, "I think the economy is part of it. People have been struggling, and running is pretty accessible."

But beyond its relative cheapness, marathoning is also a physical feat – one that's relatively doable. It offers the possibility of a tangible sense of victory when life often offers setbacks and worries. Most of us won't scale Everest or qualify for the Olympics, but no matter how chaotic or frustrating our lives get, with patience and care, we can cross a finish line. We can feel the exhilaration of success. "When you're starting out you progress so quickly," says Shorenstein. "It gives you confidence. In the race, there will be moments you feel you can't go on. Then there's something inside of you that stirs, and you go above and beyond anything you ever thought you could do. It becomes part of something bigger. It's about proving something to yourself. There are very few circumstances in life that are like that. It gives you strength, and it's very contagious."

As the quest for that intoxicating feeling has gone viral, what was once an elite sport has now become very populist. When my marathon team met for the first time last week, Shorenstein cheerfully told a group that had exactly one member who had ever done a marathon before, a group that encompasses a wide span of ages and abilities: "You can all do this."

Amazingly, she's probably right. In 2010, a stunning 99.5 percent of NYC marathoners crossed the finish line. Even more amazingly, when my own feet pound the Verrazano-Narrows this fall, most of the runners will be completely average people just like me. Roughly 60 percent of the 2010 NYC marathon runners were first-timers, and over 27,000 of them had never run more than 20 miles.

Some of the growth in marathoning may be attributable to technology: vast improvements in clothing and footwear, the rise of performance-assisting drinks and gels, and the sheer volume of information and advice available.

Yet veteran running coach and author Patti Finke says that just because more people are pursuing it, that doesn't make putting in 26.2 miles any easier. "I think the idea that everyone can run the marathon is a big bleep," she says, sidestepping more colorful language. "Anybody who's ever run one knows it's very difficult to be out there on your feet for three to eight hours." But she adds, encouragingly, "Most people, if they train, can do it."

Finke notes that the huge numbers of women who've gotten into marathoning have changed the nature of the sport dramatically. "Back when I started running marathons, I was almost the only woman running them," she says. In 1980, women made up only 10 percent of marathoners – now they're nearly half. And of those women, 53 percent of them are over age 35. "There's camaraderie in running," she says, "There's empowerment in that." And as a running friend of mine advised, the key is to focus on the immediate goals in front of you, not the great big daunting number that awaits on marathon day. Sure enough, last weekend, when I went out to Bay Ridge in Brooklyn to get a feel for the early portion of the course, I covered nine miles, filling the lungs that not too long ago had malignant melanoma in them with sweet Saturday morning air. Was it easy? No. But did it hurt? No. And was it cool seeing that number of miles on my pedometer? Unbeatably so.

There are drawbacks to popularity, however. As Bill Pierce, Health Sciences chairman at the Furman Institute of Running & Scientific Training, notes, "Many novices are running marathons without proper preparation. Join a group, train for four months and 'survive (walk/jog) a marathon' and quit running afterwards. The injury rate is very high among those training for a marathon." And when I asked the guy who sold me my sneakers at the running store if he'd ever done the NYC marathon, he replied wistfully, "Yeah, but not anymore. It's too crowded." Courses now are often so jammed, slower-paced runners spend most of the race dodging each other.

With so many amateurs flooding the field, Finke says, "There's a dichotomy between racing and running." That distinction has radically changed how we now view marathoning, but for most of us, that's ultimately not going to be a bad thing. "Not everyone who runs has to race," she says. "I think that's really nice. One of the things that’s nice about running is that it is open to everyone. It's not about beating anybody else. It's about attaining something for yourself."

And so, on Nov. 4, I will be somewhere in the back of the line, running and not racing. I have a time in my head that I'd like to make, but after Stage 4 cancer, I'm aware that just being alive on that date will be more than enough of an accomplishment for the year. All of us who are running marathons do it for our own different reasons and all of us obsess on that magic number of 26.2. But I think for most of us, the real joy and the passion are there in the steps and the miles and the weeks along the way, in the purposeful pursuit of that something powerful within ourselves. They're there within the singular beauty, in a messy, complicated, often harsh world, of simply putting one foot in front of the other, again and again, until it adds up to something meaningful. Just like life itself. As Shorenstein told our team in that first meeting, "Your achievement isn't just in getting to the finish line. It's in getting to the starting line."