Charlie Sheen's back on TV in "Anger Management." It's as lame as you'd expect, because that's how TV works now 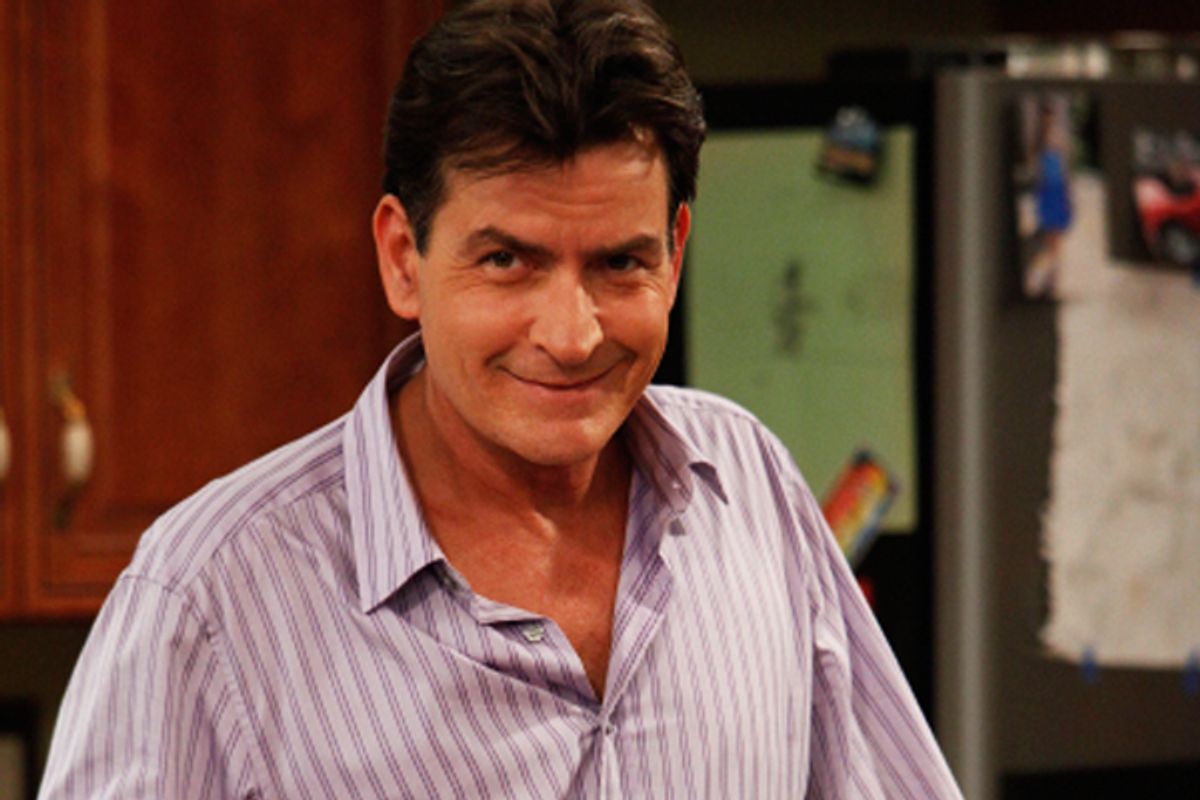 FX’s “Anger Management,” Charlie Sheen’s return to television, is a godawful, small-minded, crassly commercial exercise. It’s “Two and Half Men” on a cable channel, starring a more haggard-looking Sheen as a therapist with a temper problem. Insofar as giving the detestable, unreliable, post-“Winning!” Sheen a job and a platform is a risk, “Anger Management” is a bold step for FX. But everything else about the show, from its laugh track to the misogynistic, homophobic, lame and dirty jokes is utterly predictable. And that’s the point.

Television is in the midst of an extremely fertile period: This golden age of TV, from “The Sopranos” and “The Wire” on down through “30 Rock” and “Parks and Rec,” is a who’s who of shows that do something fresh and new, taking content, themes, language or characters in unprecedented directions. But smuggled into these shows, even the most revolutionary and cutting-edge, is something unoriginal. After the first episode, every installment of a TV show contains large quantities of sameness: The same characters, the same setting, the same premise. For all its innovation, each episode of "The Wire" featured established characters, Baltimore, that dialogue, and a worldview about the humanity-crushing nature of dysfunctional, dying bureaucracies. “Community’s” every episode may intend to blow minds and blow up genres, but audiences came to expect exactly that level of madcap energy every week. On shows like “Breaking Bad,” “Mad Men” and “Louie” (which will air in a block with “Anger Management,” and by its very excellence act as a permanent rebuke), audiences wait for the surprising moment, the one that will be so great and awesome and unlike anything we can specifically imagine.

This sameness is not usually a bad thing. Originality may be a quality we prize more, a characteristic of anything that’s aspiring to be art. But the sameness of TV, the way, over time, each show becomes a genre unto itself, is perhaps its more powerful pleasure. The most popular shows on TV — “NCIS,” “CSI,” “Two and Half Men” — are all series in which every episode hits the same predictable beats, in a supremely professional, competent and enjoyable manner. If those aren’t to your taste, then think of whatever procedural you're addicted to, whatever show you’ll always watch in rerun or rewatch on DVD — I know those are the series I love most. We may have advanced from the little kid who wants to have the same book read to him over and over and over again, but religiously watching a TV show is a different behavior by fewer degrees than we might like to think.

The nicest thing I can say about “Anger Management” is that it seems hyper-aware of this side of the audience-show relationship. Unlike most new series, and certainly unlike every other series on FX, it is totally uninterested in originality. It is an extremely calculated play for the people — and there are many of them — who want to see Charlie Sheen appear as some version of himself in a really mediocre sitcom, and see it over and over and over again. The very deal for the show makes this clear: FX agreed to air 10 episodes of “Anger Management.” If it does well, they will order 100 episodes. If the first 10 can find an audience, the assumption is so will the next 90, presumably because all 100 episodes will be almost exactly the same.

Sheen plays Charlie Goodson — as with “Two and Half Men,” on which he played a character called Charlie Harper, there’s much intentional clouding between Sheen’s persona and his characters, starting with his name. Goodson's a one-time ballplayer with anger issues; he destroyed his knee and career by breaking a baseball bat over his leg. He’s since turned his life around and become an anger management therapist, but, of course, he still has a temper. In the first episode he threatens to beat his ex-wife’s new boyfriend with a lamp. Isn’t it funny when a guy involved in various incidents of domestic abuse plays his short temper for laughs? In the second episode, an ugly woman — the show’s term, not mine -- Goodson slept with to break a slump in the minor leagues comes back to stalk him. Isn’t it funny when a guy sleeps with a woman who’s not that hot? (She’s played by Kerri Kenney, a veteran of the ‘90s sketch comedy show “The State,” just one of the supporting cast members who had me wondering what befell them that they found themselves here.) This is just the tip of the iceberg, if the iceberg were an offensive, lazy, crass sitcom, full of jokes about gay men’s asses, crazy chicks and Charlie’s sexual prowess.

There is absolutely no virtue in the new Charlie Sheen show, except that people enamored of Charlie Sheen and his skeezy persona and middling jokes will probably like it. And given the size of the audience for repeats of “Two and a Half Men” that already air on FX, the network and Sheen are betting that’s a lot of people. Personally, I’m going to skip this rerun.