Ending military rape: The crusade of "The Invisible War"

"The Invisible War," inspired by a groundbreaking Salon report, wants to change the military culture of sex abuse 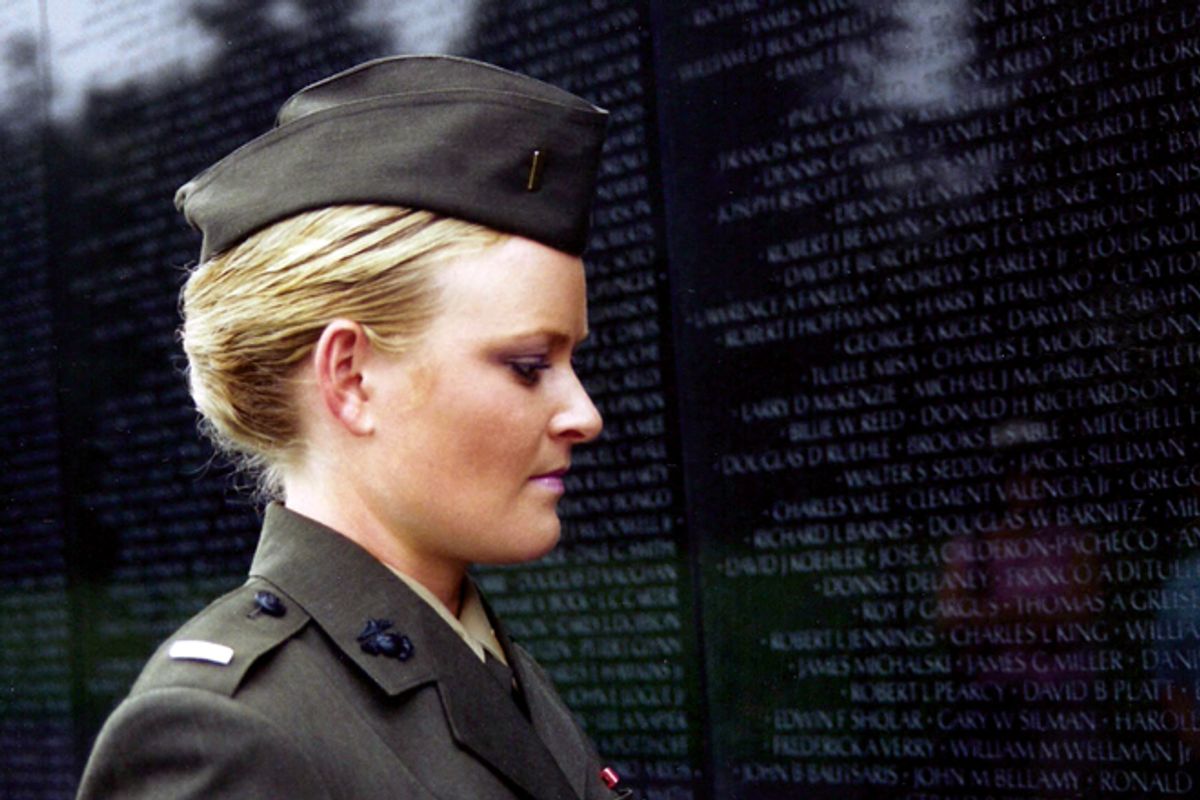 Kirby Dick's "The Invisible War" is already the darling of the festival circuit, a documentary that won the audience award at Sundance and critical praise for its sharp, skillful storytelling. But as compelling as his film is, the director of  "This Film Is Not Yet Rated" and the Catholic Church sex abuse documentary "Twist of Faith" doesn't merely want to impress you. This is a movie that intends to reform the entire United States military. And it stands a very good chance of succeeding.

Inspired by Helen Benedict's 2007 Salon story "The Private War of Women Soldiers," "The Invisible War" is a gut-wrenching condemnation of the way the military has, across the board and in every branch, failed to protect its members from sexual assault – and then failed them again and again afterward. In a series of harrowing personal accounts, victims – mostly women but a sampling of men as well – recount the trauma of their rapes while in uniform and the sickening personal consequences they experienced for reporting them. It's estimated that over 20 percent of female veterans have been sexually assaulted during their service – and some believe the real figure is even higher. It's an epidemic.

As the film demonstrates, because the military handles sexual assault internally, a stunning number of victims are simply brushed off by their superiors. But even more outrageously, many of them have faced retribution. The subjects speak of having their careers ruined, of being punished for committing "adultery" with their married rapists, or being denied veterans' benefits for the long-term consequences of the emotional and physical batterings they received.

Dick's film is a devastating, intimate portrait of the aftereffects of sexual abuse. It's impossible to see the photographs of the astonishing number of women and men who talked to the filmmakers -- each looking so fresh and sharp and proud in their uniforms -- and not be heartbroken and enraged at the perpetrators and the institutions that protected them. Days after seeing the film, I can't get the sound of their sobs out of my head. I can't forget the words of Marine Lt. Ariana Klay, talking about how her experience "destroyed" her. Or her husband, Capt. Ben Klay, choking as he talks about how "when your wife doesn't come home … [you're] rummaging through the house to find the suicide note." Another veteran explains the options simply: "Suicide, AWOL or deal with it."

In addition to being a wrenching series of personal stories, the film is also an effective exploration of the ways the military climate fosters abuse, as a "prime, target-rich environment for a predator." It shows the military's laughable attempts at "awareness" campaigns, while officials ignore the fact that the military attracts a significantly higher than average percentage of sexual abusers -- and then creates the conditions that enable abusers to commit their crimes repeatedly. The military is an insular world of power and authority, one in which, as one veteran explains, your commanding officer doesn't want the trouble of investigating something that's just going to make him look bad. And it's that very same insular atmosphere, that climate of camaraderie and fraternity, that makes the betrayal of military rape especially traumatizing. Among the ungodly haunting statistics in the film: Women who've been sexually abused in military service have a higher incidence of PTSD than men who've been in combat.

Unforgettable as "The Invisible War" is, though, the film itself is only part of the story. Though it's still making its way to theaters – it rolls out across the country slowly throughout the summer -- it has already become a bona fide movement unto itself. In April, Defense Secretary Leon Panetta saw the film, and two days later he moved the authority to investigate sexual assaults higher in the chain of command, so victims no longer need to report incidents to their commander. (Unfortunately, there's still no mechanism in place for independent investigation.) The film ends with a call for viewers to continue the conversation, and to demand that Washington take immediate action to change how it handles sex crimes in the ranks. Viewers can sign an online petition, arrange to show the film in their own communities, colleges or military bases, connect via its Facebook community, and explore resources for victims.

Films like "The Thin Blue Line" and "Paradise Lost" have proven that documentaries can bring about justice and change lives. But overhauling the way the U.S. military handles rape -- and getting it to comprehend, on a fundamental level, the tactics of perpetrators and the legitimate and serious needs of victims -- is a massively tall order. Yet "The Invisible War" makes the need to do so both immediate and inevitable, and with equal measures of fury for the crimes it documents and respect for the military itself. These men and women loved their jobs so much, and just wanted to be exactly where they were. The poignancy of their faith makes the deep need for justice and reform all the more pressing. For them. For the new recruits pouring in, full of hope and ambition, every day. At a preview screening in New York recently, producer Amy Ziering explained, "We didn't want to make an anti-recruiting poster for women." And as director and writer Kirby Dick says, "This is not a partisan issue. Whether you're on the left or the right, we can all agree that these women need to be protected."

We are not just an audience. We are not passive witnesses, sitting in the dark and feeling sad while we eat popcorn. The great achievement of "The Invisible War" is that it's a beautiful, difficult movie. But its genius is that it cannot help but shock us into action. It demands we change a system in which rape is seen as "an occupational hazard."

Early in the film, as Navy veteran Hannah Sewell describes the violent attack that robbed her of her virginity, she says, "I was screaming. And nobody came to help me." "The Invisible War" is another scream for help. And this time, it's up to all of us to make sure that all our Hannah Sewells, all our men and women who have been sexually assaulted while serving our country and brutalized by an indifferent military, are at long last heard.