These days, the ex-champ plays his violent image for laughs. His crimes are worth remembering -- and not funny 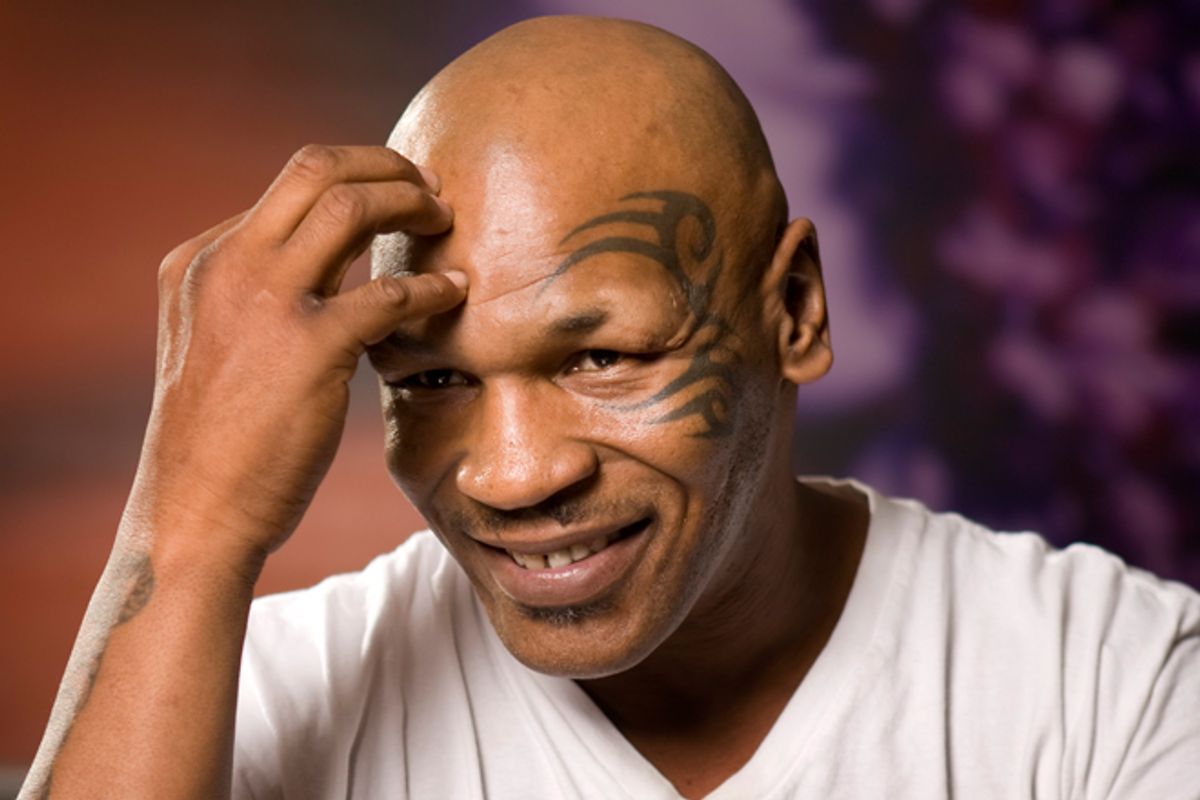 I want you to remember that. Because the guy who had that funny cameo in "The Hangover" is now peddling a one-man Broadway show, directed by Spike Lee, about his "Undisputed Truth." It's not yet in previews, but I'm going to go out on a limb and guess that a show that vows to go "beyond the headlines, behind the scenes and between the lines" will actually have quite a bit of contestable content.

Tyson's a very busy man these days. No wonder he's also currently hawking energy drinks -- in Poland. In a commercial that will haunt your nightmares, Tyson's a white-suited dandy surrounded by a bevy of beautiful women. He sits at the piano, crooning, off-key, "I may be a beast, can't control my fists ... They say that I'm rough, unpredictable and gruff."

That is one snappy little jingle. I guess by "they," he means the Indianapolis jury that in 1991 convicted him of rape and criminal deviate conduct. Or the Nevada State Athletic Commission, which in 1997 revoked his boxing license and fined him $3 million for biting Evander Holyfield during a match. Or the two motorists he pleaded no contest to punching and kicking after a 1998 car accident. Or the two women he reached a settlement with after an assault and battery suit stemming from an altercation in a Washington, D.C., restaurant in 1998. Or Robin Givens, who sat next to her then-husband in 1988 and declared to Barbara Walters, "He shakes, he pushes, he swings ... I've become afraid. Very, very afraid." And who just two years ago, elaborated, saying, "He dragged me down the hall by my hair. He pulled me out of bed by my panties. He would like to choke me. He would kick." I'm not even mentioning, by the way, a laundry list of other alleged confrontations for which Tyson was never charged.

You know, maybe caffeinated beverages aren't such a hot idea, guy. Have you thought about some camomile tea and a nice lavender eye pillow? Because having Mike Tyson singing about how he's such a tough guy is like having a man who killed a person in a driving accident selling cars.

It's not that a man who has done terrible things in the past is forever irredeemable. Look at Michael Vick, who after imprisonment for his role in a dog-fighting ring, has spent the last few years speaking out about animal cruelty and volunteering with the Humane Society. But Tyson, in contrast, has simply parlayed his notorious past into a full-blown shtick. Look at the big brute, all dressed up and warbling while he sings of his uncontrollable rage! Isn't it a hoot?

While you're laughing, remember that this is the guy who a few years ago told Greta Van Susteren that Desiree Washington, the woman he was convicted of sexually assaulting, was "just a lying, reptilian, monstrous, young lady. I just hate her guts. She put me in that state where, I don't know, I really wish I did know. Now I really do want to rape her and her fucking mama." Who wailed of his jail time that it was "most horrible time of my life. I lost my reputation; I lost everything I worked so hard for." Yeah, it must have really sucked for you.

A man who's led a life as eventful as Tyson has no doubt has many fascinating yarns to tell. He's had a remarkable boxing career and endured unfathomable tragedy. But when you see the hosts of "PTI" jovially declare they're "thrilled" he's going to be on Broadway as he joshes with them about "hitting it" with his estranged, "dreadful" wife during their divorce, when you note that Roots of Fight clothing brand is "proud to honor" him, remember that they're talking about a convicted violent offender. Remember this is a guy who expects you to giggle at his image as a "beast who can't control his fists." Who's asking audiences to spend between $75 and up to $300 for the "meet and greet package." And that's an undisputed truth.