In the least shocking divorce news ever, the world's biggest, strangest celebrity marriage comes to a close 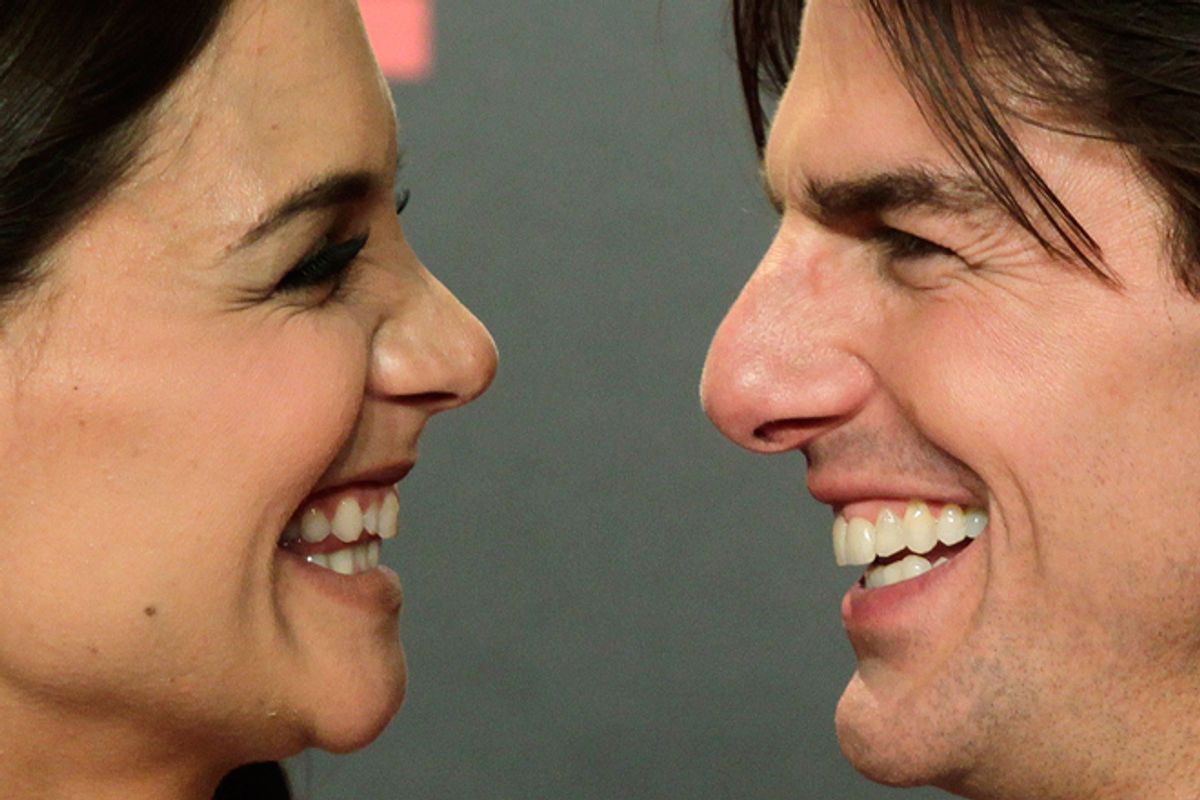 Aw, and they seemed so happy. So uncomfortably, manically happy.

It was a marriage that began as all great loves do, with Scarlett Johansson allegedly getting offered the part first. It was one that, in classic boy-meets-girl style, included a "Scientologist chaperone" onboard to tell the smitten young woman "You adore him," the better for her to parrot the words to W magazine. A relationship featuring a beloved television actress and the man that she not at all creepily described as someone she'd dreamed of marrying since she was a little girl, because "We all keep dreaming, and luckily, dreams come true." It would yield the most beautiful baby to ever wear a pair of high heels.

It's been a magical relationship, this love affair between TomKat and the guys who write jokes for late-night television.

And now, it has ended. In an emotional statement, Tom Cruise's rep told People magazine Friday that after five years of marriage, "Kate has filed for divorce and Tom is deeply saddened and is concentrating on his three children. Please allow them their privacy." Holmes' attorney, meanwhile, said that "This is a personal and private matter for Katie and her family. Katie's primary concern remains, as it always has been, her daughter's best interest." I don't know about you, but I really believed that Cruise's rep and Holmes' lawyer were going to make a go of it.

Divorce is always hard, especially when there are children involved. And the terse acknowledgment from Camp Cruise that this was ALL KATIE'S DOING suggests that this one might just have the makings of something other than the standard Hollywood mutual, amicable "We remain great friends" parting of the ways.

Was it the poor box office for "Rock of Ages"? The fact that sometimes, even when she was saying things like "Tom and I will always be in our honeymoon phase," it looked like Katie was blinking a Morse code SOS? Was it because Tom turns 50 on Tuesday, and maybe he has to go back to his planet then? After six years of couplehood – which counts as forever in show business -- maybe she just got tired of his footprints all over the couch.

Whatever the reasons, farewell, you two. We'll miss your crazy, dead-eyed displays of affection. Back in 2006, shortly after he'd proposed at the top of Eiffel Tower, like a Gallic King Kong, Cruise ominously enthused, "I won't let this woman get away." But as Tim Siedell tweeted Friday, "Congratulations to Katie Holmes for finally chewing all the way through her leg."