What powers should the president have against those who advocate open, violent revolt against the U.S. government? 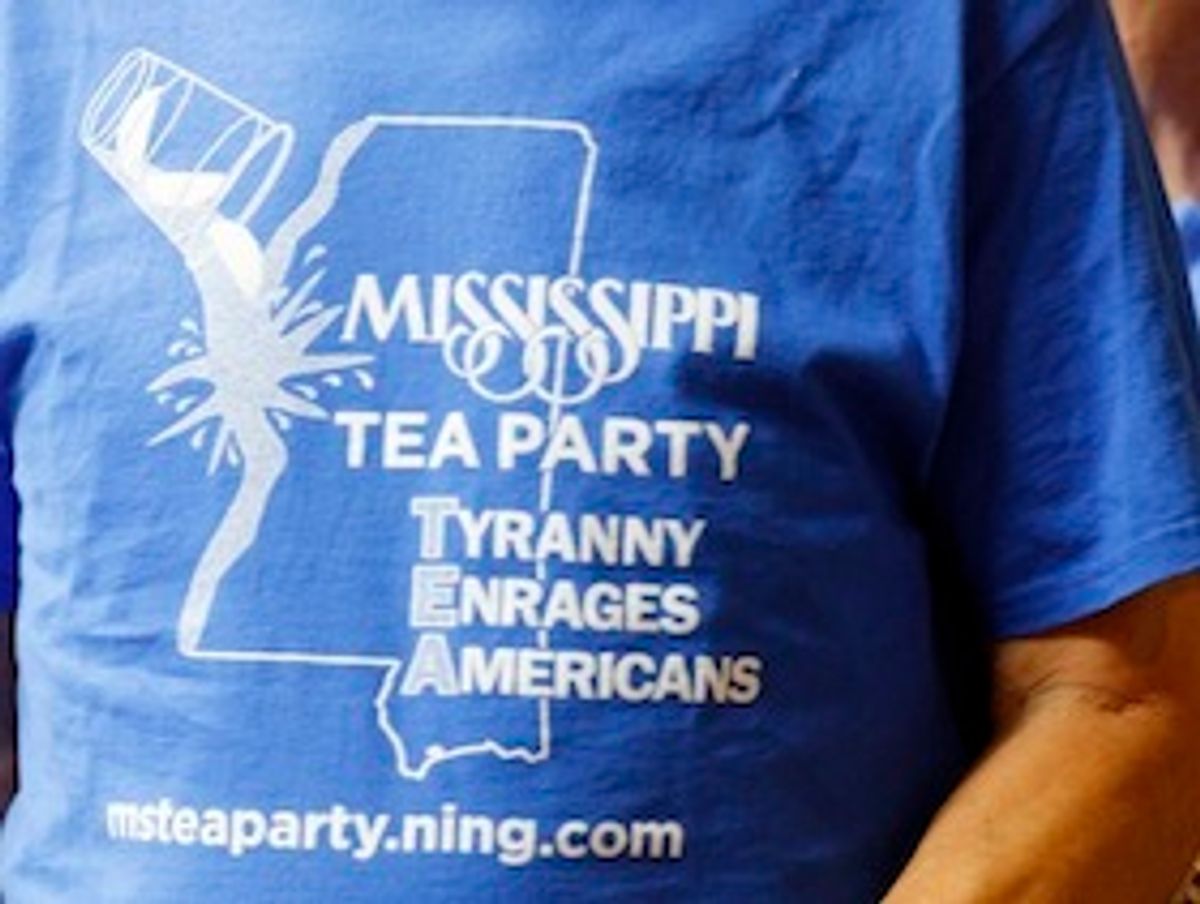 Of all the right-wing meltdowns following yesterday’s decision by the Supreme Court to uphold the individual mandate in the Affordable Care Act, this statement put out by the chairman of the Mississippi Tea Party may take the cake:

When a gang of criminals subvert legitimate government offices and seize all power to themselves without the real consent of the governed their every act and edict is of itself illegal and is outside the bounds of the Rule of Law. In such cases submission is treason. Treason against the Constitution and the valid legitimate government of the nation to which we have pledged our allegiance for years. To resist by all means that are right in the eyes of God is not rebellion or insurrection, it is patriotic resistance to invasion.

May all of us fall on our faces before the Heavenly Judge, repent of our sins, and humbly cry out to Him for mercy on our country. And, may godly courageous leaders rise up in His wisdom and power to lead us in displacing the criminal invaders from their seats and restore our constitutional republic.

Despite Nicholson’s repeated charge that the Obama administration is guilty of high crimes, the only treason in play here is the suggestion of an open revolt against the federal government.

In light of this treason accusation, here's my question: does President Obama have the power to order Nicholson assassinated without charges or trial? Should he have this right? I asked this question on Twitter, and -- fascinatingly -- virtually everyone who did not realize that I was referencing the Awlaki assassination reacted with extreme negativity, as though I had proposed something heinous, unthinkable and profoundly un-American.

But what's the principled distinction that makes assassinating Awlaki acceptable but not Nicholson? The most likely answer is that Awlaki was in Yemen while Nicholson is in the U.S., but that's just a pragmatic difference, one that cannot make any legal or Constitutional difference: American citizens don't renounce their Constitutional protections against the U.S. Government when they leave the country. If the President has the legal authority to assassinate U.S. citizens without charges on the ground that they are allegedly plotting against the U.S. when they're on foreign soil, then shouldn't the President have this same right for citizens on American soil? Think Progress celebrates the Awlaki assassination as an Obama "success"; would they do the same if the President ordered Nicholson ordered assassinated without charges?

Obama defenders often justify Obama's assassination of Awlaki by equating it to Lincoln's killing of Confederate soldiers (revealingly, justifying War on Terror abuses by pretending this "war" is analogous to the Civil War was also the long-standing favorite tactic of neocons during the Bush years). Leaving aside the painfully glaring differences between the two "wars" -- and the glaring difference between killing uniformed soldiers on a battlefield versus killing individuals in their homes far from any battlefield (see point 5) -- wouldn't acceptance of that analogy justify the targeting of Nicholson without due process? If Nicholson is in open revolt against the U.S. Government, then shouldn't the President order him killed?

Think Progress' accusation that Nicholson is guilty of "treason" is absurd -- the U.S. Supreme Court has expressly held that the First Amendment free speech clause guarantees the right even to advocate violence or terrorism against government officials -- but that did not stop the Democratic think tank and many others from cheering Awlaki's assassination. And here's a related question: for those who justified the due-process-free imprisonment of U.S. citizen Jose Padilla (who was arrested by the Bush administration on U.S. soil and then indefinitely detained without charges based on the allegation that he had joined Al Qaeda): should President Obama have the power to order Nicholson indefinitely detained without charges or trial? Would those who oppose such a power be guilty of advocating for traitors?

In light of all this, does anyone have difficulty understanding the complaint that the U.S. Government has a radically different system of justice for Muslims than it does everyone else? The primary "evolution" of the War on Terror over the past several years has been the importation of its civil liberties erosions onto U.S. soil and applied to U.S. citizens on the claimed ground that Homegrown Terrorism is now the gravest threat. As the country largely cheered the due-process-free assassination of U.S. citizen Awlaki, is it really difficult to envision the same power being applied in cases like this?

Jacob Appelbaum, the Internet freedom activist and WikiLeaks associate, has been targeted by the U.S. Government in multiple ways despite never having been charged with any crime, including constant border harassment, laptop seizures, and the secret issuance of "national security letters" to his Internet providers and other services. Watch this short video as he takes advantage of the opportunity to question the FBI's Deputy General Counsel at an event at which she recently appeared: