Who deserves to die? 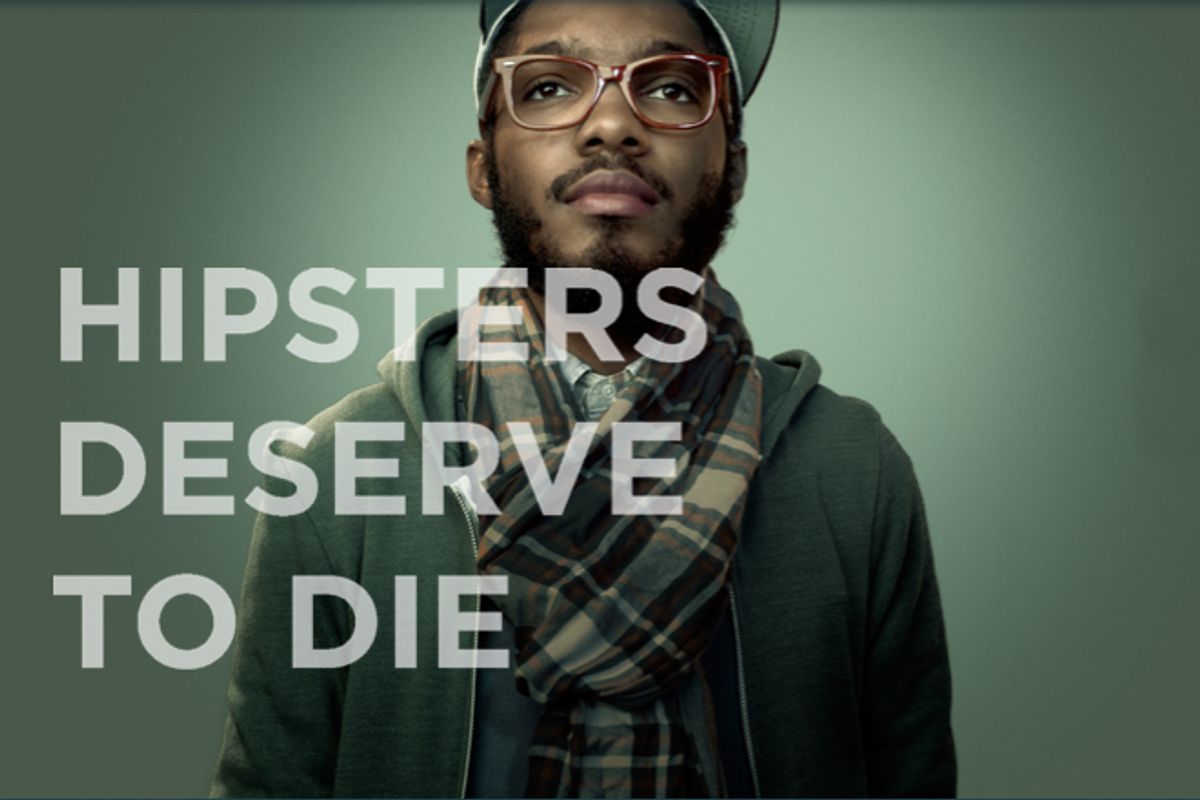 Breaking: People don't like being told they deserve to die. Yet this week, the Wisconsin ad agency Laughlin Constable launched a national campaign targeting an assortment of groups they say do.

The images are bold and chilling: Photos of a variety of archetypes, each captioned with similar messages. "Hipsters deserve to die. The tattooed deserve to die. Cat lovers deserve to die. Crazy old aunts deserve to die." The reaction has been immediate and strong. A Utah resident told a local news station, "I think it's stupid, as a matter of fact I think it ought to be taken down." In Chicago, a resident called it "very offensive to people who are animal lovers." Across the country, the ads have been torn down.

But the message behind that attention-grabbing – and incendiary -- campaign is a powerful one. Dig a little deeper, and you'll see it's from the Lung Cancer Alliance, which explains, "Every year 160,000 lives are lost to a deadly disease. They didn't ask for it, but many people seem to think they deserved it. ... Lung cancer doesn't discriminate, and neither should you."

There's comfort in control. It's reassuring to believe that if you just do everything right, you'll be safe. And there's a deep-rooted human impulse to look for reasons why bad things happen. That way, they can only happen to other people. People who are, in their own reckless ways, somehow asking for it. It's a defensive coping mechanism, and an incredibly effective way of shutting down compassion and empathy and outright help. Because, you know, what did you expect, wearing that hoodie or letting that guy in your room or eating that pizza?

Of course, our lifestyles and our actions affect our health. If you're sucking on two packs of Camels a day, riding your motorcycle without a helmet, downing a bottle of Wild Turkey every night or having unprotected sex, you're almost assuredly going to face consequences. In my life I've lost three family members to smoking, including my uncle, who died of emphysema just last month. The choices he made over the years had a very direct effect, culminating in his current residence in a coffin instead of a nice little house near his three grown children. But you know what? He's just as dead as someone who never smoked a day and died of lung cancer anyway. That loss is just as real and painful to his family. And we put ourselves on very shaky moral ground when we create hierarchies of compassion, when we decide that, say, breast cancer is nobler than lung cancer, or that HIV contracted from a mother during childbirth is innocent, but HIV contracted from sex is your own damn fault.

Earlier this week, I was sitting in a waiting room at Sloan-Kettering, downing a massive jug of contrast dye before a CT scan and making chitchat with my fellow patients and the family members who were by their sides. "What are you getting checked out today?" asked an older woman who'd driven in from New Jersey with her brother.

"I had metastatic melanoma," I told her.

She looked me up and down and asked the question I've heard repeatedly over the last two years. "Were you a sun worshipper?"

"I wasn't," I told her. I've never had a tan in my life. But the sun bore a hole in the top of my head anyway. Melanoma loves scalps and the tops of ears and the backs of necks and eyelids; it can attack the inside of your eyes and places where the sun never shines at all. As my doctor told me when I went in for treatment Thursday, "We still don't know how all the factors, like genetics and environment, work." I was just unlucky. That's why I tell everyone who will listen to wear sunscreen and a hat. That's also why I would not wish what I've been through on anyone. As far as I'm concerned, you can be as orange as Patricia Krentcil and you still haven't earned the experience of wondering how your children would remember you if you died this year.

When I go to my weekly support group, I sit with people who have a broad variety of cancers. To the outside world, maybe some of us seem more meritorious than others. Yet worthiness isn't a condition of having things happen in your life. Life doesn't play fair that way. Absolutely, you can improve your odds. You should. So lock your doors and buckle your seat belt and wear your sunscreen and use condoms. Please don't smoke, because it really is very bad for you. You'll be a happier, saner, safer person if you love yourself enough to take good care of yourself. But understand that you can do everything right and still have everything go wrong. Prepare for the worst, but know that when the worst happens, blame doesn't cure anything. And that, as Denise Kohnke, the vice president of strategy for the agency that created the Lung Cancer Alliance ad said this week, "The absurd thing is no one deserves to die."