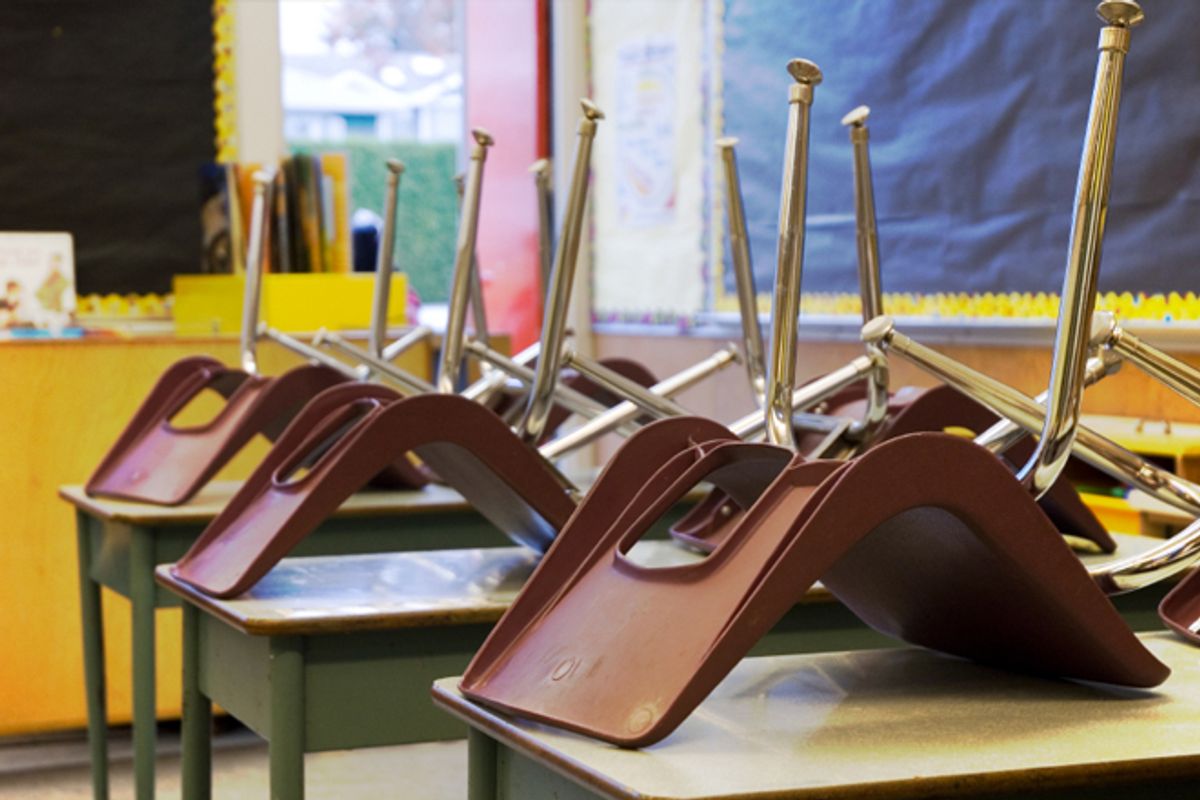 The Wisconsin recall is now weeks past, but collective bargaining is still under assault nationwide. In cities and states across the country, public school teachers face threats not just to their benefits, but to their right to negotiate. And liberal Democrats are as likely as Scott Walker-style Republicans to be the ones mounting the attack.

Earlier this month, the U.S. Conference of Mayors held its annual meeting in Florida. It’s a diverse group, including leaders from both parties and all parts of the country. But it pulled off a unanimous endorsement of a pivotal piece of legislation: the anti-union education reform template proponents call “parent trigger.”

Parent trigger is the latest flashpoint in the wars over “education reform” (a term now claimed by right-wing front groups, defensive teachers' unions and activists of many stripes). It exemplifies the near-consensus of the media and financial elite: That teachers’ interests are opposed to those of kids and parents; that smoking out bad teachers trumps improving teacher retention; and that what’s needed in a crisis is to concentrate power. It also shows, anti-Walker rhetoric notwithstanding, that workers’ right to bargain is no Democratic Party sacrament.

Parent trigger laws create a mechanism for parents, by submitting sufficient signatures, to force one of a few “turnaround options” for their kids’ school, including bringing in a charter company to take over the school and select its own workforce. In an emailed statement, Los Angeles Mayor and outgoing Conference of Mayors Chairman Antonio Villaraigosa said: “Parent Trigger empowers parents to turn failing schools into high-achieving schools.”

But Kathleen Oropeza, co-founder of the Florida parents’ group Fund Education Now, warns that reality is very different: “The parent trigger uses a parent’s love for their child to pull the trigger and pass a public entity, a school, into the hands of a for-profit charter.” Trigger is among the model bills pushed by the now-notorious American Legislative Exchange Council. While individual laws vary, critics warn that they offer a back door for private (sometimes for-profit) companies to drum up signatures (sometimes dishonestly), bust unions and sideline school boards. “Sure,” says Oropeza, “parents can pull the trigger, but they lose all control from that point.” (Asked what happens to parents’ power after a charter company is brought in, Michael Trujillo of the pro-trigger group Parent Revolution said parents would maintain greater leverage through the threat of pulling the trigger all over again.) Opposition from Oropeza’s group and others helped to narrowly defeat a trigger bill in Florida’s GOP Legislature in March.

Rather than trigger, says National Education Association president Dennis Van Roekel, “If you want to turn one of those schools around, collaboration is key … Students’ learning conditions are the educators’ working conditions.” Martha Infante, a middle school teacher in South Central Los Angeles, says collective bargaining has given her “peace of mind to know that you can do your best instruction” and “give your best opinion, your best thoughts, and not fear retaliation from management.”

Randi Weingarten, the president of the American Federation of Teachers, criticized mayors who had pushed for “mayoral control” of schools, failed to turn them around and then become trigger advocates: “I’d have a lot more respect for them … if they said that as part of mayoral control, parents and teachers should really have a voice about how their schools act and operate.” Villaraigosa won “mayoral control” in 2006. (It was later successfully challenged in court.)

Mayors aren’t the only Democrats moving to weaken teachers’ bargaining. In February, Connecticut Gov. Dan Malloy proposed changes that in some schools deemed failing would have allowed his education commissioner to unilaterally replace teachers and impose new working conditions. In May, Malloy signed a deal that instead included a limited collective bargaining and arbitration process during school takeovers. Weingarten defends that compromise: “Collective bargaining is not static … let’s try it and see if it works.” “While we value collective bargaining, and we weren’t looking to eliminate collective bargaining,” says Malloy chief of staff Mark Ojakian, “sometimes you have to do things in a more expedited fashion in order to have the impact that you want.”

The Democrats’ squishy stance on teacher bargaining goes all the way to the top. On a conference call last month, I asked Obama campaign policy director James Kvaal whether the president believes it’s appropriate to restrict collective bargaining as part of education reform. Kvaal’s answer struck two themes: Obama “is clearly willing to challenge unions when he thinks that movement is needed,” and “he believes that we need to work with teachers and teachers’ unions to strengthen our schools.” Not mentioned: collective bargaining.

Despite objections from some members, both AFT and NEA have gone out of their way to emphasize their openness to collaborations with reformers and concessions to administrators. “We live in a fast-changing world,” says Weingarten, “and my view is always we have to do things that are good for kids and fair to teachers.” But these efforts haven’t spared either union from attack.

So why are Democrats going after teachers’ bargaining? Part of the answer: as usual, the worse the Republican alternative, the more cover Democrats have to let labor down. Kvaal’s call was set up in response to a Mitt Romney speech blasting Obama for being “unable to stand up to union bosses,” and pledging to allow parents to redirect funding from public schools into private ones.

Asked whether Democrats take teachers' unions for granted, Van Roekel said that’s not the issue and pointed to a different culprit: “There’s so much money involved that somehow, some way, you have to get those deep pockets or you can’t be in public service.” Indeed, as Lee Fang documented in the Nation, there’s a tight web connecting finance industry titans, education companies and political operatives. In Connecticut, teachers' unions were outspent 2-to-1 by Michelle Rhee’s Students First and other groups backing Malloy’s proposals.

But those efforts are also made possible by an ambivalent public. A Phi Delta Kappa/ Gallup poll last year found that most Americans report confidence in public school teachers, and a majority would side with teachers over governors in collective bargaining fights. But in the same poll, only a quarter of respondents said that unionization had helped the quality of public school education; nearly half said it had hurt. Teachers are particularly vulnerable at a time when so few private sector workers have union benefits, and when there’s so little political will for improving education by spending more on it.

Infante, a constituent of Villaraigosa’s, calls Democrats’ trigger stance “beyond disappointing," adding, "When you have the same exact education policies as the Republicans, then that tells you you’ve lost track of what your values are supposed to be.”