Does science support the idea that we should have extra confidence in the devout? No way, says a prominent atheist 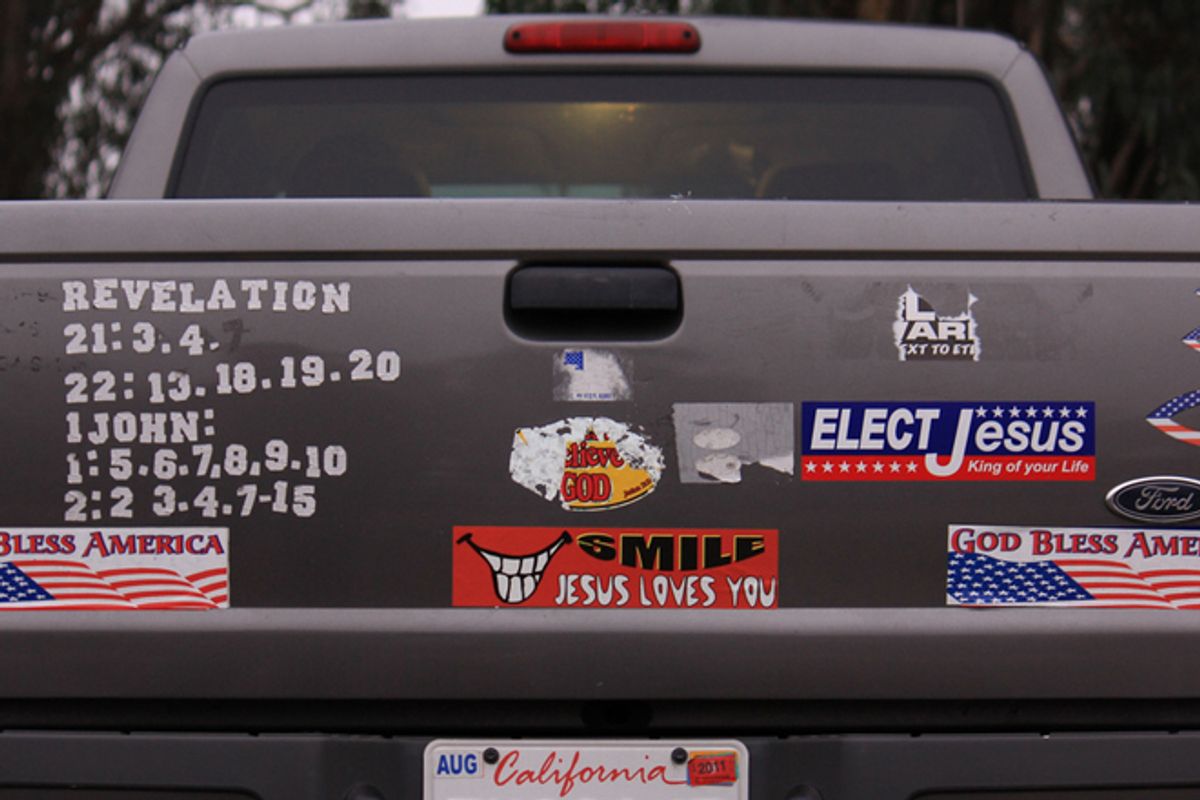 Jesse Bering faces a serious dilemma, and as usual, he resolves it using his academic specialty, psychology. It's an excellent example of failing to see the forest for the trees. I was brought up short by an anecdote he used Sunday on Salon to explain his rationale for not trusting godless people.

Take, for example, a situation I found myself in outside a rail station in an Irish seaside town years ago. My luggage in hand, the cold gray sky windy and threatening rain, I was confronted with two taxis at the curb waiting for passengers. One of the cars had a crucifix dangling from the rearview mirror and a dog-eared copy of the Bible on prominent display on the console.

The other taxi showed no trace of any religious icons. Now, all else being equal, which of these two taxis would you choose, considering also that you’re trying to avoid being overcharged, a practice for which this part of the country is notorious — and that being an American during the W administration, I might add, elevates you one step above our 43rd president in respectability? Both drivers are in all probability devout Catholics — this is Ireland, after all. Still, there’s no way to know for certain.

Unless you’re trying to make a point about how “atheists are good people too” or you happen to despise the Catholic Church, it’s really a no-brainer: Go with God.

Ack! No! It's a no-brainer, all right: The correct answer is that when you see a taxi queue outside a rail station or airport, you take the first cab in line. The drivers expect that; they're going to be made uncomfortable if you take a cab out of order, because you've put them in the position of jumping the line ahead of their coworkers.

If nothing else, I hope all prospective travelers reading this essay take away this basic understanding of taxi etiquette. My good deed for the day is done.

I'm also baffled by this behavior of inspecting taxis for religious paraphernalia. I always just hop in the passenger seat of the car and tell the driver my destination — scrutinizing the car and driver is just a little creepy and weird.

So how does Bering justify his discriminatory behavior? He cites the usual, familiar studies that show that if you take a sample of the general public (which, unfortunately, usually means middle- and upper-class white kids at a college) and expose them to religious priming words, they'll tend to make decisions that conform more to social norms. In particular, there is a "supernatural monitoring hypothesis" that argues that making people conscious that someone might be watching — even if that someone is an imaginary supernatural being — tends to make them more self-consciously law abiding.

I accept these studies. I have no reason to believe that they are wrong, and they actually do explain some behaviors. But I do not consider them to be sufficient, and I think using narrow studies of this sort to guide real-world decisions is a serious mistake.

I read Bering's anecdote completely differently because I'm more likely to pay attention to the forest than the trees. He says right out that this region has a reputation for overcharging; it's also a small town in Ireland, so I can safely assume that it is almost entirely Irish Catholic and that finding an atheist cab driver would be an outlier. So I would immediately infer that being religious and overcharging customers are not mutually incompatible — and that if a behavior is the norm, you are not protected from it by associating with people who conform to other norms.

There's also the obvious fact that religious people are not less prone to break the law or cheat. We don't see an obvious correlation between religiosity and criminality. (Well, the correlation is there, but it goes the wrong way for Bering's hypothesis, and I'm not going to go there because the causality is complex, and I do not believe that religion makes people bad.) We can see an inarguable tendency for religion to cause people to check their behavior in the short term, but in the long term ... human beings are really, really good at rationalizing all kinds of objectionable behavior. It seems likely to me that these small-town Irish taxi drivers with a reputation for overcharging have almost certainly developed their own justifications for it — their passengers are foreigners or are too rich for their own good or perhaps are wicked, godless psychologists from the big city here to corrupt the youth and therefore deserving of a little extra billing — and that these rationalizations would not be consequences of their faith or lack thereof.

So maybe I should go with the godless cabbie (setting aside the faux pas of jumping the queue). No, wait, there's another problem here. Dangling a crucifix from the mirror is a cheap signal; it may also be an unnecessary signal in an area where Catholicism is taken for granted. We Americans may be accustomed to obnoxious religious people wearing their faith prominently on their sleeve, but it's not universal — most religious people have no desire to constantly trumpet their beliefs at others. So I know absolutely nothing about the religious preferences of either driver. Basing a decision on potentially misleading cues — and on a false presumption that religious taxi drivers are more trustworthy — is pointless. Just get in the first cab and be done with it.

Now I have to emphasize that I'm not finding fault with the psychology studies cited; I am pointing out that they are limited in their context and that extending them leads to error. But I agree completely that there are external signifiers that human beings, as social creatures, use all the time to reinforce community behavior. To use one such example, religious markers, as the primary factor while ignoring all the other possibilities is a mistake.

My own anecdote: My wife and I were off at an atheist conference in another town, and we were at a restaurant for dinner. When the time came to pay the bill, Mary leaned over and whispered to me, "Be sure to tip well — we want them to think well of all the atheists in town." I always try to tip well, I hasten to add, but it was a beautiful example of a combination of factors — peer pressure from my wife, self-interest in making my community welcome and personal empathy for underpaid workers — that conspired to make sure I was actively prosocial. We don't need to imagine an invisible spirit hovering over our shoulder to make charitable decisions. Perhaps we'd all make wiser, better decisions if we actually made them on the basis of valid and real social concerns, rather than out of fear of invisible and intangible supernatural observers — supernatural observers who, by the way, always seem to be freighted with the petty bigotries and terrors of the person being observed.

But let's return to the example of our Irish taxi drivers, upon whom we're also busily imposing our own biases about their motivations. Let's complicate it some more. What if one of these godless taxi drivers was also a fan of Jesse Bering's evolutionary psychology writings and, having read his latest, was placing a Bible and crucifix in his taxi specifically to fool the rubes? These could be deceptive signals!

I think the real lesson here is clear: When choosing a taxi, be sure to quiz them on basic psychology and avoid the ones that understand the concepts at a simplistic level. I'm not worried about getting into a taxi with either a Catholic or an atheist, but the thought of being taken for a ride by a pop psychologist terrifies me — you never know what glib bill of sale you'll be given.