There's too much Joey Tribbiani in the "Friends" star's new sitcom, "Episodes," which has no excuse for being dull 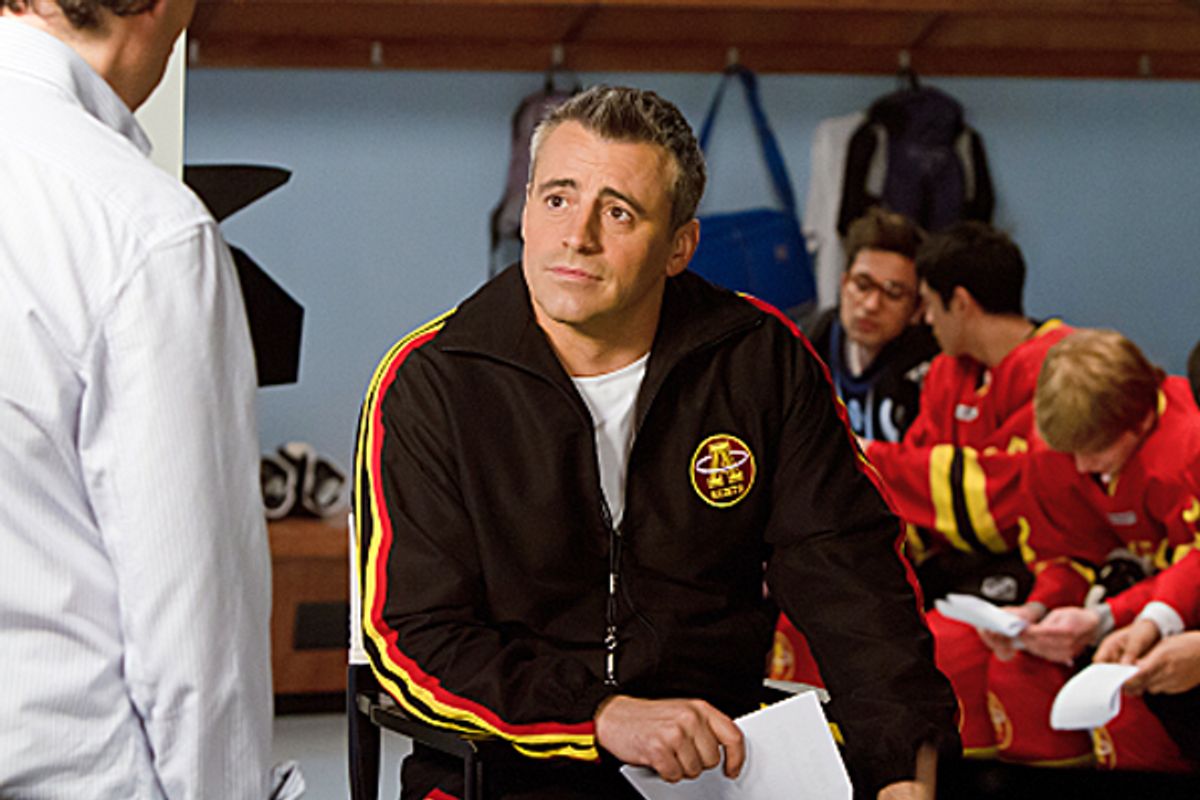 Showtime’s “Episodes,” which began its second season last night, is a sitcom about the making of a bad sitcom — and not just because that is its plot. In the show’s first season, British couple Beverly and Sean brought their clever British comedy about an erudite school teacher to Los Angeles, only to supervise as it was pummeled and ground into a mediocre show called “Pucks!” starring Matt LeBlanc as a hockey coach. The witty, salty, underprepared pair discovered they were no match for the forces of Hollywood, acquiescing to make a series neither could be proud of while irrevocably damaging their marriage when Beverly hate-slept with LeBlanc. As season two begins, Sean and Beverly are civilly, almost normally working together while she waits for his forgiveness, and they continue to churn out a show they both know, at best, is an inoffensive piece of crap.

“Episodes,” which comes from “Friends” co-creator David Crane and Jeffrey Klarik, is about how smart people with great intentions end up making something middling. This is not a particularly original storyline (see, everything from “Network” to “The TV Set”), and its very banality suggests what is keeping “Episodes” itself from being a great sitcom: The show is not just about the struggle between the good and the mediocre, it is itself a struggle between the good and the mediocre.

Take the acting. The two Brits who appear on the show are outstanding, appealing, prickly, and, most rarely of all, intelligent-seeming. Beverly (Tamsin Greig, who has appeared in the British shows “Green Wing” and “Friday Night Dinner,” which are both worth finding on the Internet) is an acerbic, blunt presence who, as Emily Nussbaum put it in her review of the show, “finds herself curdling into Hollywood’s view of her: the nagging bitch” — hugely sympathetically, I would add. Sean (Stephan Mangan, who appeared in the British version of “Free Agents,” also worth finding on the Internet) is a nerdier sort of Hugh Grant — a not-quite-as-charming, smarter, adorable British bumbler. They are joined by the actress Kathleen Rose Perkins as the bitchy, stoner network executive who can turn her work persona on and off like a lightbulb, a really mesmerizing party trick.

And then there is LeBlanc, who plays a sort of hedonistic version of himself: an over-sexed, overly-entitled if likable guy, who, unfortunately, still has lots of Joey Tribbiani’s mannerisms. (In a future episode, his co-star asks Matt if he thinks “all of the Friends will come to his funeral.” He is disinterested in pursuing this line of inquiry. I was not.) LeBlanc is not playing Joey, but he got his training as Joey, and there are things that LeBlanc as LeBlanc does on camera that are too shticky for the sort of show “Episodes” wants to be. He delivers his punchlines too broadly, as if he’s waiting for a laugh track, and he does that very stagey vocalized whimper-grunt Joey would make when he was about to do something he was a little nervous or confused about. LeBlanc’s sitcom training has slipped into a show trying to make fun of exactly that kind of sitcom.

But the sort of sitcoms that “Episodes” is taking aim at are even lame targets. “Episodes” exists in a universe where the big hit show is not something like “Modern Family” but rather a horrible new series about a talking dog. It exists in a world where “Pucks!” is bad, but the upper limit on quality is a horrendous live-action “Family Guy” adaptation. “Anger Management” just started airing last week, so I’m not about to argue that terrible, crass sitcoms don’t make it to air, but “Episodes” proceeds as if terrible, crass sitcoms were the only things being made, rather than acknowledging we are living through a rarefied time for comedies, a time that makes its characters’ failings even more damning. It is not the audience's fault that these two Brits have dumbed themselves down; it is their own, however much coercing the network has done. ("The fault, dear showrunner, lies not with our audience, but with ourselves.") “Episodes” soft-pedals this conclusion, de-fanging its own cynicism and clarity and, just like its characters, keeping itself from excellence.