It's time to end our insane hemp prohibition. If it's legal in soaps – and even to eat – then why can't we grow it? 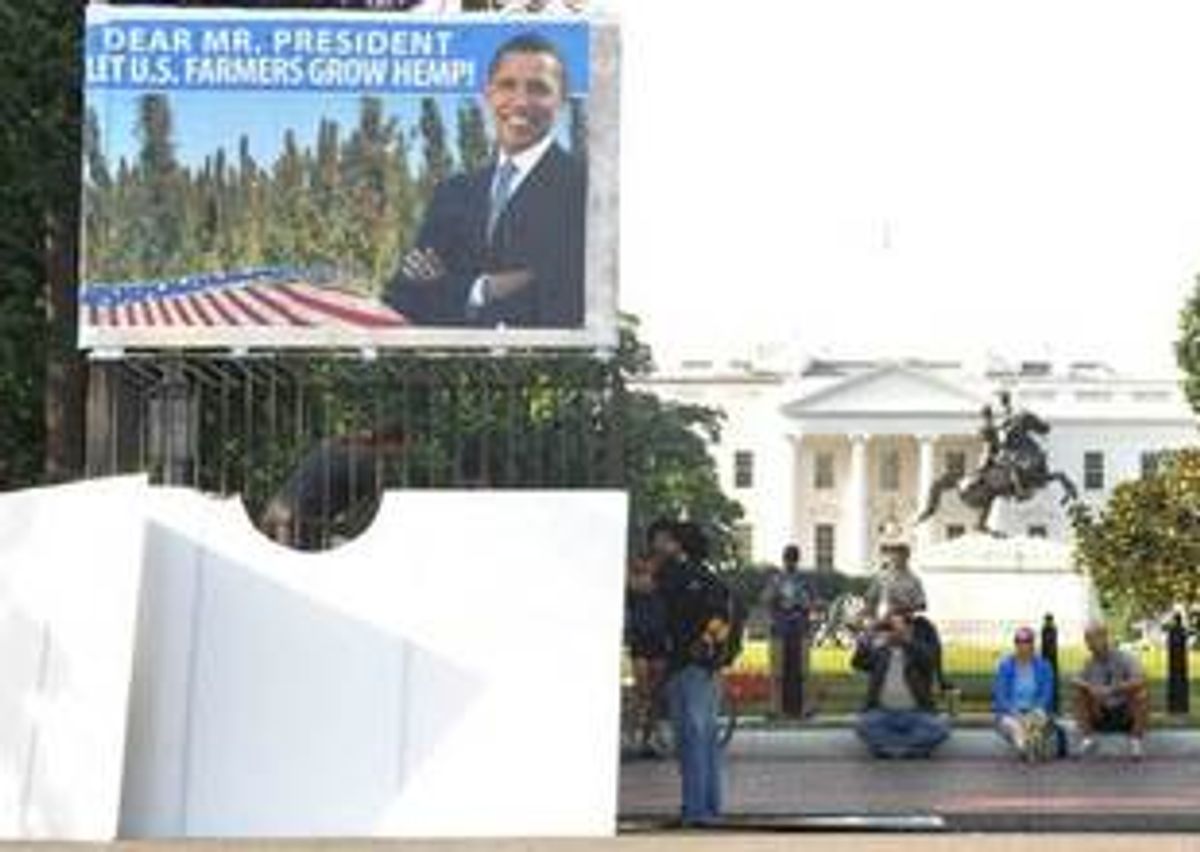 David Bronner was recently arrested for attempting to eat a healthy breakfast. Does that sound stupid? Even once you know the details, it should sound stupid:  Bronner's food of choice was bread spread with hemp seed oil he pressed himself from industrial hemp plants, which he did in front of the White House under a banner reading: “Dear Mr. President Let U.S. Farmers Grow Hemp."

Bronner's company, Dr. Bronner's Magic Soaps, spends over $100,000 to buy over 20 tons of hemp seed oil from Canada each year to use in its soaps. Bronner wants to give that money to American farmers instead.

If it's legal to use in soaps – and even to eat – then why is it illegal to grow here? Because according to the government, hemp is a drug. Specifically, it's considered identical to its close cousin, marijuana. But Bronner says it is no more a drug than a poppyseed bagel. The plants he gathered seed from to press his oil in front of the White House had been tested to confirm they contained less than 0.3 percent THC, which means it would be “impossible to get a high of any kind” even from smoking extremely large quantities of it. A more likely result from smoking that much industrial hemp would be a bad headache or perhaps a sore throat.

Bronner explains that his protest was “the culmination of a lot of frustration,” saying, “We're just sick and tired of this policy. It basically hands the world's largest market for industrial hemp seed and fiber products to the Canadians, Europeans, and Chinese, who are laughing at us all the way to the bank.”

He and others have lobbied to legalize growing industrial hemp in the U.S. for more than a decade. The environmentally friendly soap company appreciates that hemp can be grown without toxic agrochemicals, but it's the high omega-3 fatty acid content that really draws him to eating it and using it in his soaps. Bronner finds that the omega-3 content of hemp seed oil “makes the soap a lot smoother and emollient and less drying.” As a food, it has the “ideal ratio” of omega-6 to omega-3, about three to one.

Over the last half century, Americans have systematically removed omega 3 fatty acids from their diets, replacing them instead with omega 6 fatty acids. Within the human body, the two essential fatty acids “compete,” making the ratio of omega-6:omega-3 more important than the absolute quantity one eats of either one on its own. The 3:1 ratio of hemp seed oil is ideal, but most Americans eat14 to 25 times more omega-6 than omega-3, causing a range of health problems.

Bronner and other hemp advocates were hopeful that Obama, who voted in favor of hemp cultivation twice as an Illinois state senator, would follow what they call a “rational science-based approach to hemp policy.” In addition to its use as a food and as a cosmetic, the plant offers uses as a fiber to make clothing or paper. Historically, Americans grew hemp until 1957, and during World War II, the government even encouraged farmers to grow it. The U.S. ships had hemp sails and the pioneers' covered wagons were covered in -- what else? -- hemp. Over the past three years, hemp advocates have aimed to introduce Americans to this part of our history by holding an annual Hemp History Week.

Bronner's protest action, which he undertook inside a specially designed cage that was difficult for the police to open or move, was held in conjunction with this year's Hemp History Week. “As silly as this action is,” he says, “It's 1/1000 as silly as this policy that's forcing us to year after year after year send our money to Canada.” This is not his first protest either – he's also been arrested forplanting hemp on the lawn of the Drug Enforcement Agency headquarters in 2009.

Civil disobedience and violations of laws against industrial hemp are different from those of medical marijuana. A terminally ill patient only needs a few plants to satisfy their needs, and if they are arrested, the government often does itself a lot of harm, as the public sees the lunacy of arresting a patient getting relief from their intense pain. But a farmer requires many more plants – perhaps 10,000 plants, Bronner estimates – to commercially grow industrial hemp. The penalty for that farmer would be much stiffer than those imposed on a medical marijuana user, and to the farmer, it's just not worth the risk. He or she could simply grow a different, legal crop. “It's not a life and death thing for them, not something they are going to go to jail for,” says Bronner, explaining why he decided to protest. “So that's where I came up with this, like I'm going to put my own liberty at stake and say are you really going to put me in jail for not wanting to send my money to Canada?”

Since industrial hemp, by definition, cannot get you high, why is it still illegal? The stated reason is that someone could hide marijuana plants within a field of hemp. Bronner laughs at this, saying “The Chinese government that shoots you if you have marijuana allow tens of thousands of acres of industrial hemp, and they can tell the difference.” Technically, they execute people for trafficking, not for smoking it. Still, the point is well made. The North American Industrial Hemp Council compares the difference between the two plants to the difference between corn and roses. Industrial hemp producers space their plants four inches apart, growing them as tall as 20 feet high, whereas marijuana plants are grown six feet apart in shorter, fatter bushes.

A more likely explanation for the continued ban on growing industrial hemp is that the vested interests that stand to lose market share if it were allowed – the cotton and timber industries – hold enough power in D.C. to keep it illegal. But the tide may be changing. Sen. Wyden from Oregon recently introduced a measure to recommercialize industrial hemp, and while it did not even get a vote, he might introduce it again soon. And North Dakota already has a program in place to allow growing industrial hemp. Advocates like Bronner say Obama could simply direct the Department of Justice to respect states' rights and let North Dakota farmers go ahead and grow industrial hemp. But when Obama is asked about marijuana or hemp, he laughs it off. “Very soon,” says Bronner, “any politician that talks like that is going to get laughed at. We're not there yet, but we're almost there.”

Jill Richardson is the founder of the blog La Vida Locavore and a member of the Organic Consumers Association policy advisory board. She is the author of Recipe for America: Why Our Food System Is Broken and What We Can Do to Fix It.