We started the fire: Global warming burns the West 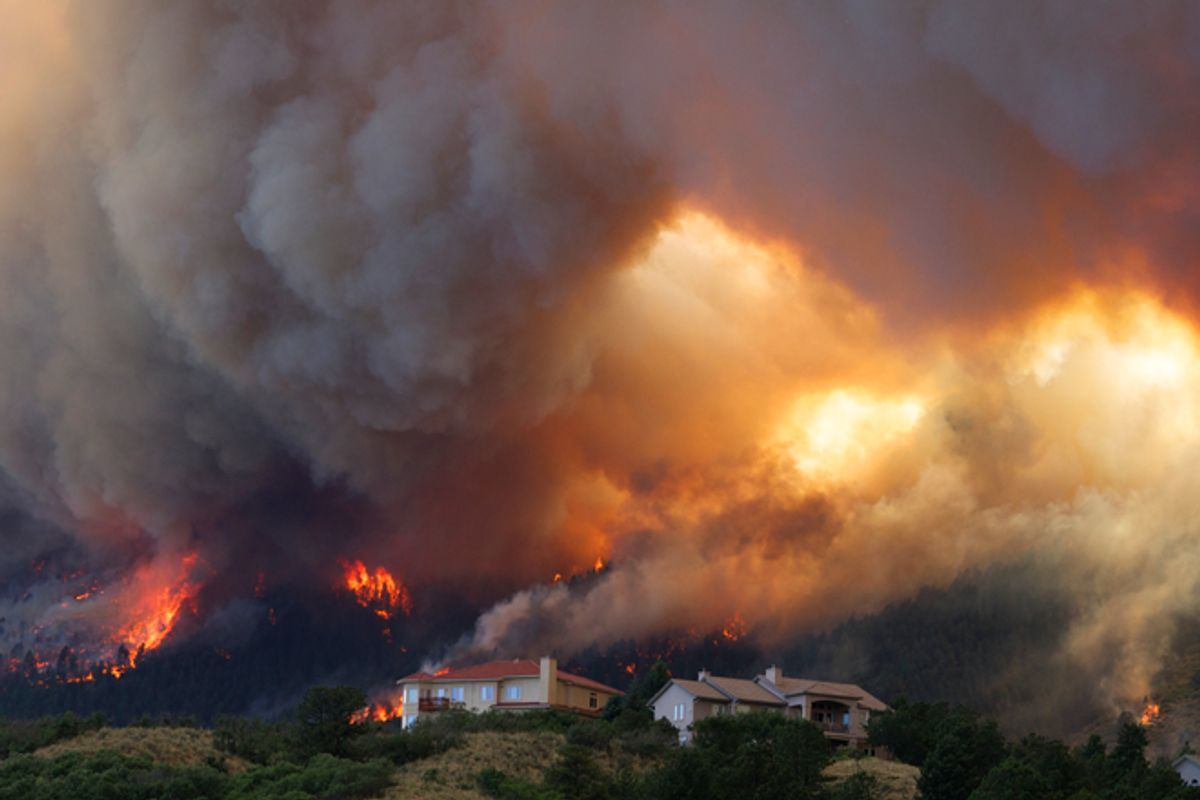 If you want proof that the earth’s climate is changing, go virtually anywhere in the Southwest in the summer. Chances are high that you will see a brown line of haze on the horizon and smell smoke in the air from a forest fire somewhere in the arid region.

I spend my summers in a grove of ponderosa and pinon in the mountains of northern New Mexico. When I bought the land bordering the Carson National Forest 20 years ago, there had not been a forest fire to speak of on the mountain in living memory. Then a massive blaze in May 1996 burned 7,600 acres on the slopes above my adobe cabin and destroyed 27 of my neighbors' homes in a matter of hours. Smoke from the fire resembled the mushroom cloud from an atomic blast and was visible for over a 1,000 square miles of high desert.

Fire itself is not a sign of climate change. Lightning-strike fires are natural events in forests that help to maintain their ecological balance, thinning out overcrowded woodlands, enriching the soil with fresh carbon and creating clearings where the bushes, forbs and grasses, loved by wildlife, can flourish. What is not natural, however, is the size of some of the recent blazes, their sheer destructive power.

Massive fires in Arizona, Texas and New Mexico last summer -- the largest recorded to date in each of those states -- scorched over 700,000 acres, destroying thousands of homes. And fire experts expect this summer to be even worse in parts of the intermountain West which experienced the hottest spring on record and where drought conditions now prevail. A huge windswept fire still smoldering in the isolated Gila National Forest of southern New Mexico has destroyed over 265 square miles, topping last years Los Alamos blaze as the biggest in the state’s history. Another fire now blazing near Colorado Springs -- the most destructive in Colorado history -- has burned hundreds of homes and caused the evacuation of thousands more.

Headline fires like these have become routine events in recent years. Light winter snowpacks, early melt-offs in the spring, and hot and dry summers were blamed in a 2006 report by the University of Arizona for a steady rise in fire activity that has been happening throughout the intermountain West since the mid-1980s.

These findings were echoed in a study published in June in Ecosphere, the peer-reviewed journal of the Ecological Society of America. The report’s coauthor, Texas Tech University climate scientist Katharine Hayhoe, says that scientists now have enough information to confidently tie the increase in the number and severity of fires to climate change. Hayhoe told Mother Jones magazine that, "Scientists found compelling agreement in long-term models that more fires would occur at mid-to-high latitude areas like North America."

That is because there appears to have been a northward shift of the jet-stream, weakening the annual summer monsoon which brings forests in the region most of their yearly rainfall. When trees are low in moisture content and winds are hot and dry, you have a prescription for the sort of high intensity mega-fires that have been sweeping the American West. These risks have been compounded by spreading insect infestations like the spruce budworm. Drought-stressed trees are unable to defend themselves against insect pests which have been wiping out huge swaths of high altitude forest, rendering the dead standing trees into kindling waiting to ignite.

Climate change affects every location differently. The rule of thumb is that wet areas will get wetter, while dry regions will receive even less rain than usual. Projections based on a computer analysis of 18 different climate models suggests that this is already happening in the Southwest, and that the region will get progressively drier and hotter in coming decades.

In much of the Southwest this year, there is no sign yet of the annual summer monsoon, temperature records are being broken, wells and springs are drying out, irrigation ditches are bone dry, farm crops are withering.

Arid spells are nothing new there. Tree ring data going back thousands of years reveals that hot and dry periods have alternated with cooler, wetter times. A decades-long drought is believed to have caused the historic migration of the native Anasazi people from western New Mexico and Arizona to the more hospitable Rio Grande valley in the late 12th and 13th centuries. Yet curiously there is no evidence that this period witnessed the massive fires that we are seeing today. Forest researchers say that is because the spate of recent fires is not just the product of global warming, but also, ironically, of the fire suppression policy pursued by the U.S. Forest Service over the last century.

If you are old enough, you may remember all of those Smokey the Bear commercials -- "Only YOU Can Prevent Forest Fires" Well, America throughout the 20th century took the message of protecting our forests to heart. Aggressive fire-fighting policies were spectacularly effective. With few fires to thin them out, however, Western forests soon became thick and overgrown, an unhealthy condition that did not exist before humans interfered with the natural fire cycle.

The net result is that, when fires do start nowadays, the unnaturally high “fuel loads” can make those blazes unstoppable. Instead of the small, low intensity ground fires of the past, today’s wildfires are frequently raging crown fires incinerating trees like matchsticks and destroying virtually every plant and animal over an area of dozens or even hundreds of square miles. If these mega-fires continue, we may lose a large proportion of our Southwestern forestlands before the present century is over.

And many of these forests will never grow back. This according to Craig Allen, a research ecologist with the U.S. Geological Survey in Los Alamos, New Mexico who says that one of the effects of climate change in the Southwest is that many areas which once supported healthy forests will revert to grass and scrublands as higher temperatures “drive our forests off the mountains.” A process similar to the ongoing desertification of the Sahel in North Africa is already taking place in our own backyard.

The Forest Service is doing what it can -- reintroducing low grade fire through controlled burns and mechanically thinning overgrown forests near towns -- to address the escalating danger of mega-fires. But so long as the region continues warming and drying out, these efforts may prove to be too little too late. And it isn’t just forests that are at risk from climate change. Expect water shortages in urban areas from Los Angeles to Dallas and heat waves such as occurred in Europe during the summer of 2006 in which over 30,000 people died.

“You can probably bet your house that, unless we do something about these greenhouse gas emissions, the mega-droughts of the future are going to be a lot hotter than the ones of the past,” says Jonathan Overpeck, a climate scientist at the University of Arizona, one of the authors of the Nobel-Prize-winning work of the Intergovernmental Panel on Climate Change.

Moreover, as low rainfall drives water prices higher, agriculture in many areas will become prohibitively expensive. Erratic weather will also increase the severity and frequency of floods and dust storms, perhaps even creating another Dust Bowl like the one that ravaged the southern plains during a prolonged drought in the 1930s.

Americans often imagine that climate change is someone else’s problem. We are told that that the worst hit areas will be low-lying Pacific islands, monsoon dependent regions in South Asia, and countries bordering the Sahara where the desert is currently advancing.

But anyone who thinks that the poor in the global south will be the only ones to suffer should look to the American Southwest. If we don't act now to cut greenhouse gas emissions and slow down the climate change juggernaut, the fires that are sweeping the southern Rockies this summer will be a sneak preview of worse that is yet to come.