Land of the free? Remembering when the man who penned "The Star-Spangled Banner" defended slavery 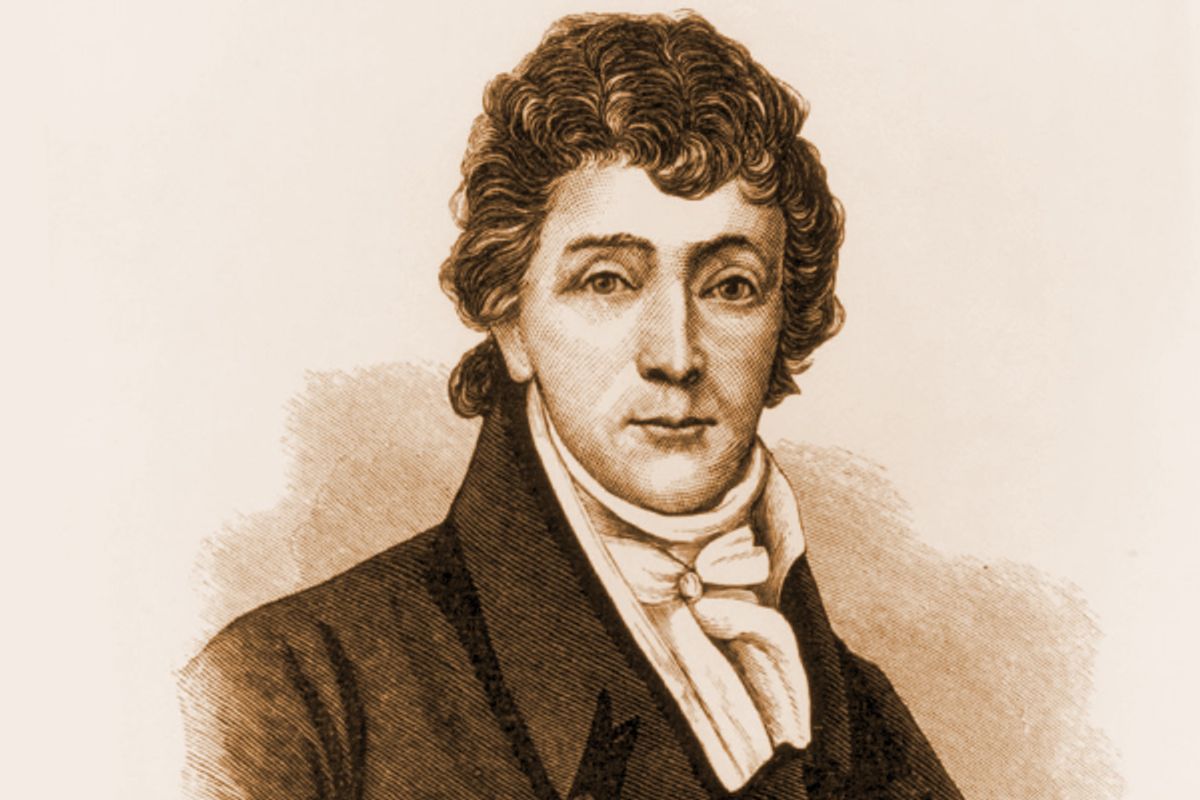 Excerpted from "Snow-Storm in August: Washington City, Francis Scott Key, and the Forgotten Race Riot of 1835" by Jefferson Morley

In the final two days of U.S. v. Reuben Crandall, on April 25 and 26, 1836, Washington's district attorney, Francis Scott Key, and defense attorney Richard Coxe addressed the jurors for the last time. The courtroom in City Hall in Judiciary Square was thronged with spectators. Congressmen jockeyed for seats along with national newspaper correspondents. The crowds had come to see Key’s case against the abolitionist movement. Just as the slaveholders’ representatives on Capitol Hill were noisily seeking  a “gag rule” to prevent debate over slavery on the floor of Congress, so did Key, the famous author of "The Star Spangled Banner," seek to silence those who would agitate for freedom on the streets of Washington City. In the trial of New York doctor Reuben Crandall, he hoped to defeat the antislavery men in the court of public opinion.  The abolitionist, in turn, hoped to discredit Key, sneering about his hometown, "Land of the Free …. Home of the Oppressed."

The debate between Key and Coxe crystallized how radical new ideas of rights introduced by the free people of color and their white allies in the early 1830s had galvanized popular thinking in America. These ideas  divided Americans into two broad political tendencies that would endure into the 21st century. Key and Coxe were exemplars of what we now know as red and blue politics.

The blues of the 1830s were the liberals of the day, the opponents of slavery, concentrated in the Midwest and Northeast. They had a presence in Congress, led by former president John Quincy Adams, a formidable parliamentarian. They had a wealthy benefactor, New York businessman Arthur Tappan, who organized effective publicity campaigns. And they had made themselves felt in Washington City, thanks to the efforts of editor Ben Lundy, schoolmaster John Cook and others. They were so-called abolitionists and they brought three radical ideas into the realm of American politics:

1) Property rights are not unlimited;

2) American citizenship is open to people of any race;

3) The freedom to advocate both is essential

These strong ideals still animate the American liberal tradition nearly two centuries later. Like the anti-slavery men and women of yore, 21st century liberals believe that property rights can be limited for the common good; that American citizenship should be as inclusive as possible; and that freedom of expression is a prerequisite of a free society. Reuben Crandall's defense attorney Richard Coxe was no abolitionist and he did not argue in court for Negro equality in U.S. v Crandall. But he did lay out a “true blue” case for freedom of expression to protect those who wanted to advance such ideas.

Key's response was a classic conservative rebuttal. From the start Key denounced Coxe for even defending the advocates of Negro citizenship and those who questioned the slave owners’ expansive definition of property rights. Compared to Coxe, Key had a much narrower conception of freedom of speech. He argued that the antislavery publications could be suppressed in the name of public safety since they might incite violent rebellion. He defended a narrower conception of American citizenship — that it was reserved for the native-born and whites only. And he had a much more expansive understanding of property rights. White men did have a constitutional right to own property in people, Key insisted.

This general set of ideas still animates red American conservatism against the country’s liberal tendencies. It is true that conservatives no longer believe in chattel slavery as a social practice but they do retain an extreme definition of property rights (embodied in freedom from taxation and regulation); a narrower conception of citizenship (it is reserved for native-born Americans) and a belief that threats to public safety may justify limitations on civil liberties. In U.S. v. Crandall, the famous author of the Star-Spangled Banner argued the red agenda of the day: defending the white man’s property rights, scorning the idea of multiracial citizenship and urging the suppression of those who disagreed.

Richard Coxe spoke first in closing arguments. He was 43 years old and far less eloquent than his opponent. But 23 years of practicing law gave him an understated style that was easy to underestimate. Never, he said, had the performance of his professional duties aroused “feelings of more intense anxiety.” Never, he went on, had he felt a deeper interest in the outcome. The issues decided here, he told the jurors, “May be brought to bear upon each member of this community, and upon our children's children …. Great principles are to be settled.”

As for himself, Coxe said he felt a sense of duty to “the principles of liberty and of the constitution.” He said that if any individual in the District of Columbia could, like Reuben Crandall, be arrested, have his personal papers seized, and his most confidential correspondence exposed to public gaze, “then I say, this District is no place for me.”

Coxe spoke of Reuben’s plight, arrested and charged, held for eight months and denounced before the community. Coxe wanted to make clear his position was very different than that of his friend Mr. Key.

“This process, thus illegally issued, thus illegally executed, has been justified by the District Attorney. He avows his participation in it, and avows himself ready, whenever required, to prove that it is lawful. “

Coxe wanted to interpose himself forcefully. “On the other hand, I pledge myself on all occasions, and whenever the question shall be presented for judicial decision, to brand it as tyrannical, oppressive, illegal, and unconstitutional.”

Coxe denounced Mr. Key’s case against Reuben Crandall. “It is, gentlemen, preposterous. It is monstrous,” he slashed. “It has no foundation in any principle of law -- it can find no support in any dictate of reason. It is a reproach to our community -- it is a slander upon our institutions, that an intelligent and highly accomplished individual, should, under such circumstances and upon such grounds, have suffered what has already been inflicted upon him.”

Then he looked to Reuben in the dock. “His books and papers were harmlessly reposing in his trunk and his office, neither injuring nor calculated to injure anyone. From this quiet repose, both have been snatched by the lawless violence which has characterized the proceedings against him: language imputed to him which he never uttered, and bruited forth to rouse into action, and to stimulate to deeds of ferocity, a ruthless mob.”

Coxe knew when to stop. He thanked the jury on behalf of his client. “I submit him and his fate with entire confidence into your hands,” he said. He sat down.

It was half past five o’clock and Judge Cranch called for the court to adjourn for the evening.

The next morning, Key summed up the U.S. government’s case against Reuben Crandall.

“I consider this one of the most important cases ever tried here,” he began. It presented a conflict of rights, he said: the white man’s property rights versus the free speech rights of an antislavery man who sought not only to deprive white men but also to degrade them.

“We are to give up our slaves — not for compensation — not gradually as we may be enabled to substitute other labour… but absolutely, unconditionally immediately,” the District Attorney said. “Nor is this all. They are to remain among us — to be admitted immediately to a full and equal participation in all civil and social privileges. Then, if we do not like our new condition, we can go away — and the friends of human rights and amalgamation can come and take our places.”

So the most important question facing the jurors, Key said, was whether the pamphlets seized from Crandall’s house were “libelous.”

“They declare that every law which sanctions slavery is null and void …" Key reminded them, “That we have no more rights over our slaves than they have over us. Does not this bring the constitution and the laws under which we live into contempt? Is it not a plain invitation to resist them?”

Implacable in his desire to see Crandall hanged, Key asked the jurors to understand the threat to their own honor.

“Are you willing, gentlemen, to abandon your country, to permit it to be taken from you, and occupied by the abolitionist, according to whose taste it is to associate and amalgamate with the negro? Or, gentlemen, on the other hand, are there laws in this community to defend you from the immediate abolitionist, who would open upon you the floodgates of such extensive wickedness and mischief?”

Key's language would echo in American political rhetoric through the late 20th centuries, especially in the South. Anyone challenging the system of legal slavery (and later legal segregation) would be accused of wanting to associate and amalgamate with the negro. Key thought the prospect was appalling. In summing up, he waxed sarcastic against Crandall.

“If he is an innocent man, cruelly imprisoned under an illegal warrant, and these vile, calumnatory libels, are actually this innocent, persecuted gentlemen's property -- stolen from him -- then gentlemen return him his property and let him go free.”

“It is with you, gentlemen,” he said, “I ask of you but to do your conscientious duty. ”The jury went into a separate room to deliberate. The attorneys, the crowds, the clerks, the defendant could only wait and wonder. Could an antislavery man caught with a trunk full of incendiary sheets get a fair trial in Washington City? Would the jurors be persuaded by Coxe's plea for freedom of speech? Or by Key's case for suppressing the antislavery subversives in the name of white supremacy?

Less than three hours later, the jury foreman reappeared. The crowd quieted itself.

Judge Cranch asked the foreman for the verdict on Reuben Crandall.

“Not guilty!” he exclaimed.