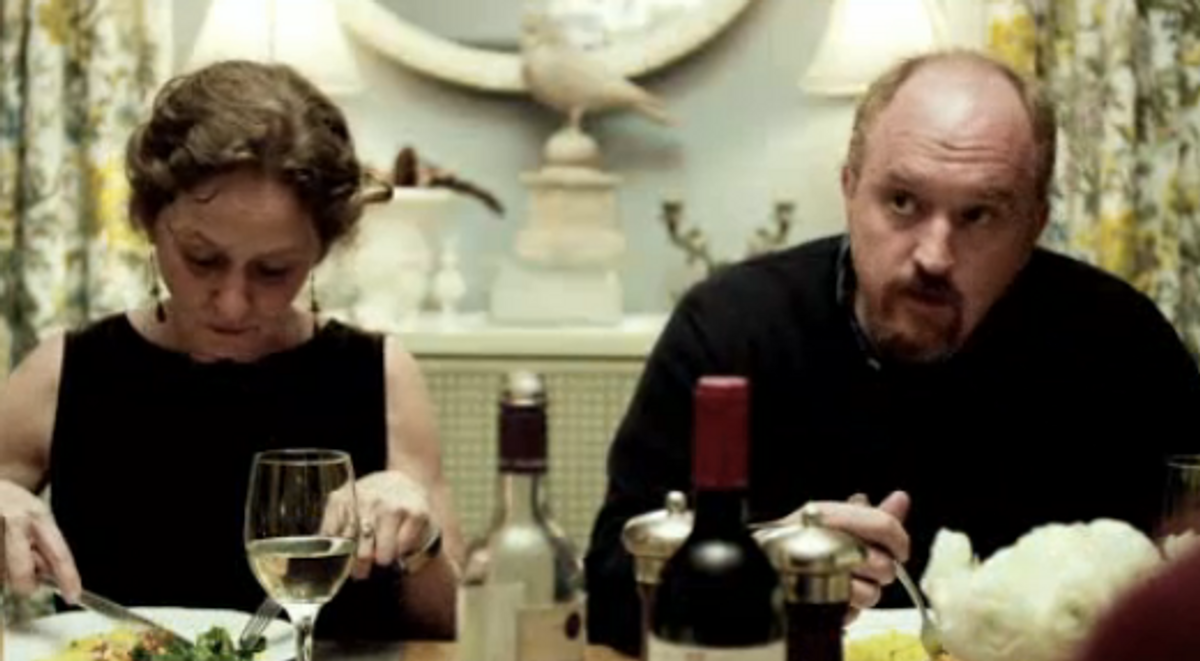 Melissa Leo appeared in all of 15 minutes of last night’s episode of “Louie” as the indelible Laurie and I am already desperate for her to have her own sitcom. I can just see it: FX throws over the infantalizing “Anger Management” and gives “Louie” the partner it deserves, another show about a prickly curmudgeon given to doing uncomfortable, surreal, too honest, sometimes horrible things. Over the course of last night’s episode, Laurie called Louie a faggot, sexually pressured him, physically assaulted him, and blamed all of the failures in the world on Obama -- but in such a likable, perverted, unabashedly straightforward way that I am now hoping “Laurie" (and it’s no coincidence Leo’s character’s name is almost a homophone for C.K.’s) will one day pair with “Louie” to make for a very special night of television.

Here was the premise (and you can see the scene at the bottom of this post): Laurie and Louie, in their matching leather jackets, were set up on a date against both of their wills. After suffering through a silent, awkward dinner, where their host forced them to make inane small talk while Leo aggressively knifed the chard, and gave Louie an all-time-great look of complete and total disdain, the pair sneaked off to a bar, and hit it off about how presumptuous married people can be. Leo, who is best known for her Oscar-winning performance as the chain-smoking, Boston-accented mother from “The Fighter,” is 52 to C.K.’s 45, and she looks her age, but in an appealing, real-person way, with a deep, smoky laugh and crinkles around her eyes.

After the drink, Louie gets back in Laurie’s van, so she can drive him to his motorcycle (yes, despite his neck injury last episode, he still has that thing). She pulls over and offers to give him a blow job. Louie accepts, at which point Leo expects reciprocity: “OK. Let’s get some payback. Strap on the feed bag.” The feed-bag line is a harbinger. Laurie is not interested in making herself overtly feminine or sexy for Louie, she’s being plainspoken and straightforward about her wants. As far as synonyms for vaginas go, they don’t get much more workmanlike than “feed bag.” But Louie demurs, explaining that that’s very intimate, and he doesn’t really know her and the two just have “different values” about this. To which Leo replies, “This isn’t about values, I just sucked your dick, you’re gonna eat my pussy!”

Things only get crazier from there. Louie calls her a whore and Laurie furiously defends her honor by equating giving oral sex with morality, saying, “You want to know how many dicks I sucked I didn’t want to suck? Because I’m a good kid, because I do what’s right. I never left anyone hanging. How dare you!” She eventually blames Obama, somehow, for this sexual snafu (“Where are the gentleman! What is wrong with this country? Obama”) before betting Louie that in three minutes he’ll be doing exactly what she wants. He takes that bet, she calls him a faggot to shame him into going down on her, and when that tactic doesn’t work, in a classic bit of “Louie” surrealism, she slams his head into the side of the truck, almost breaks his finger, climbs atop him, and gets the oral sex she desires. When it’s over, Louie contentedly agrees to see her again. Such is the likability of Leo’s performance that despite, as Slate has pointed out, her basically date raping Louie, I really hope he goes out with her again

What’s so brilliant about this scene — my favorite of the year so far—  is that it is and is not a complete gender reversal. If Laurie were a man, and Louie were a woman, this would be understood as rape. Laurie mercilessly pressures Louie to do what she wants sexually, and when her words fail, she resorts to violence. Louie’s refusal — it’s too intimate, they’re strangers — is put exactly in the terms one tells teenagers, especially girls, to employ should they find themselves in a situation that makes them uncomfortable: Don’t do anything that you don’t feel comfortable doing. Don’t do anything you aren’t sure you want to.

But the portrayal of Laurie is far too sympathetic for her to just be another date rapist. The gender roles may be largely reversed, but the genders haven’t been, which means the power hasn’t been entirely redistributed. Though Laurie does, in fact, physically assault Louie, almost up until the moment she does, he is not scared to be in a car with her. He’s not physically threatened. Moreover, Laurie may be demanding what she wants after the fact, but she has already made herself vulnerable by doing the giving. It’s impossible to imagine a woman calling a man who had just gone down on her a whore, as Louie does Laurie. And Louie’s hesitance to perform oral sex does seem caught up in some societal squeamishness about this particular act. If she’d just wanted to have sex, Louie would have done that, right? Is sex not intimate? And, what, going down on a woman is too intimate, but sticking one’s penis in her mouth is not?

Most of all, there is the fact of Laurie's breathtaking, gonzo female sexual self-confidence. The conversation really pivots at the bet, at which point Laurie gets more aggressive and crazy. But up until then she keeps making points entirely in keeping with how people actually have sex, but in contravention of how we like to talk about people having sex. Of course people do things they don’t want to do in their sex lives — just as they do in their real ones. And not all of those things are horrible or have horrifying consequences. Not every blow job is a blow to the psyche. When Laurie tells Louie she doesn’t really care about how uncomfortable going down on her makes him, she just wants to get off, this seems wrong. But a few minutes later, when he’s actually done the deed, it turns out she was right: He didn’t really care either. Men and women, their sex organs, and their sex acts, they’re not exactly the same, and it makes this scene hum. Seriously, someone please make “Laurie.”