Bloated with teen-oriented summer spectacles, the ailing film industry may finally look to moviegoers over 30 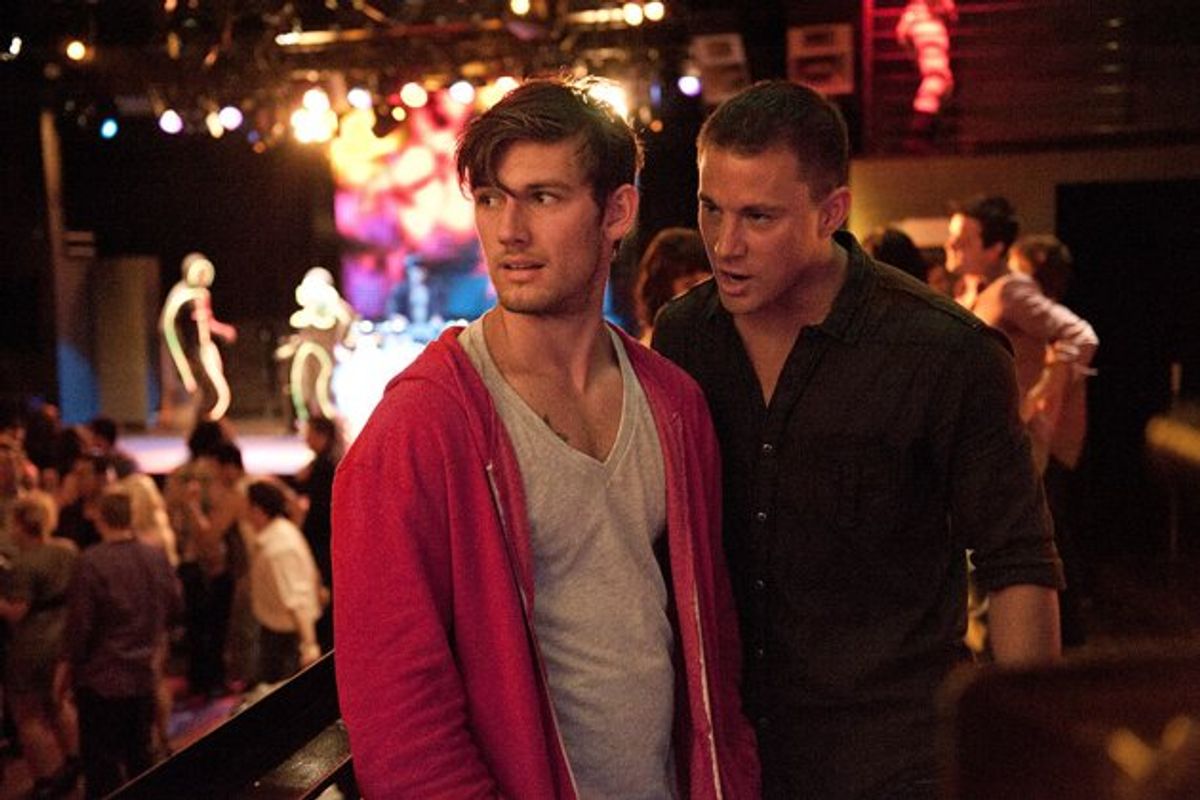 Is Hollywood's business model failing because it's almost exclusively focused on teenagers and young adults, and largely ignores moviegoers over 30? This question reappears in various guises every year or so, and after you pick it apart -- what do we mean by "failing," when they're still making piles of dough? What do we mean by "largely ignores," when plenty of adults still show up? -- it almost always merits a murky, yes-and-no answer. And while that's still the case, the debate has broken out anew across the movie blogosphere.

This year's "tentpole" season has already produced three whopping huge hits -- "The Hunger Games," "The Avengers" and, apparently, "The Amazing Spider-Man" -- with "The Dark Knight Rises" still to come. But the billions of dollars those movies will generate have failed to dispel the atmosphere of anomie surrounding the film industry, or the sense that it hasn't yet adjusted to a cultural and technological marketplace that has fundamentally changed. Ticket sales in North America appear to be on a permanent downhill slide, and the big studios' profit margins now depend on two interrelated factors: Increasing ticket prices, especially for 3-D projection, and a single-minded focus on big-budget, effects-driven action spectacles that can be successfully exported to the biggest markets in the developing world, most notably India and China.

Stephen Jannise, film program director at the Austin Film Festival, wrote an intriguing blog post this week that marshals some miscellaneous and perhaps irrelevant evidence to craft an ingenious argument. He points to bona fide indie success stories like "Moonrise Kingdom," "The Best Exotic Marigold Hotel," "To Rome With Love" and "Beasts of the Southern Wild," along with the R-rated hits "Ted" and "Magic Mike," as proof that "adults are going to the movies in droves and making a huge statement by doing so." OK, sure -- but I don't know how much crossover there is between Wes Anderson's rueful, picturesque New England nostalgia, an all-star cast of aging British thespians and Mark Wahlberg's foulmouthed teddy bear. More to the point, every season of every year offers a handful of quirky, modestly scaled movies that pull adults off the sofa; that's what has kept Sony Pictures Classics, Magnolia Pictures, Fox Searchlight, Focus Features and other mid-size or small distributors in business.

But that's where Jannise's theory gets interesting, as he expounds on the difference between his grandparents' generation, who were used to the idea that "Gone With the Wind" would play for months at the local theater, and today's movie fans in the 35-plus demographic, who grew up in the '70s or later, after the blockbuster revolution wrought by Steven Spielberg and George Lucas. Sophia Savage, of the Thompson on Hollywood blog, sums it up this way:

Now that the generation that came of age during the profitable blockbuster (i.e., "Jaws") era has grown up, Hollywood can't keep up with their programmed need to see something new every weekend. Unfortunately for studios, much of that grown-up generation has grown tired of aliens, sequels and spandex and doesn't want to pay upwards of $15 to be bombasted [sic, although it's a pretty good word] with it all on a regular basis. But that doesn't mean they are tired of movies; the recent success stories suggest that returning to original content and good old-fashioned storytelling could be the key to owning the adult demo. Shocker!

I've never heard this precise variation before, and I suspect it's true: There's an entire adult demographic out there who would be happy to go to the movies every damn week, if there were something they wanted to see. Generally there isn't, so they stay home and watch "Breaking Bad," "Game of Thrones," "The Good Wife" and so on. We've definitely had versions of the movies-for-grown-ups debate before, surrounding the indie explosion of the '80s ("Down by Law," "She's Gotta Have It," "Sex, Lies, & Videotape") and the even bigger Tarantino moment of the mid-'90s. But Jannise is postulating something bigger and broader and less hipster-flavored than that, something that encompasses a wide swath of the adult population, and it's an idea that's worth taking seriously.

Savage's post also pointed me toward a fascinating Variety column by David S. Cohen, who covers technology-driven movies for the trade publication -- and confesses that he's gotten sick of them. A self-described "genre movie geek" who's part of precisely the Lucas-Spielberg generation Jannise was describing, Cohen says he detects "a growing dread in Hollywood that America's moviegoing culture is withering." Perhaps perversely, he blames the overwhelming success and technical excellence of the big spectacles that have become Hollywood's bread and butter. If you can tolerate the industry jargon, it's a damning assessment:

There are more of these movies than there used to be, and they look and sound better than ever, but I've come to think that they can't possibly be made with the intention that anybody would actually see all of them.

Because the more I see, the less I want to go to the movies. And I don't think it's just me ... I have this gnawing suspicion that tentpoles, the majors' flagship movies, have stopped being the best advertisement for movies. In fact, they may be having the opposite effect.

Today's tentpoles are to movies what Thanksgiving is to dinner -- nice for a special occasion, but not something you'd want to have every week ... My colleague Peter Debruge puts it another way. He observes that with so many entertainment options available, tentpoles are designed to overdeliver -- to be bigger, louder, longer and longer -- just to get people into the multiplex and leave them feeling they got their money's worth. The resulting movies are as rich and heavy as a super-sized meal at McDonald's.

It's a great relief to see someone utter these heretical thoughts in print, and in the bible of mainstream showbiz, no less. There are so many of these high-tech spectacle movies every year that by the time we get to the Fourth of July -- or the 4th of June, for that matter -- it's hard for professional movie-watchers not to feel beaten down by the things, and to view them mainly as absurdist or baroque exercises in pure technique. (As to which: "Battleship"! Totally worth a pay-per-view.) As I read Cohen's article, I could feel the silent chorus of amens ascending from film critics throughout the land.

If what Cohen describes is a recognized professional hazard, it also speaks to the fact that only one or two of Hollywood's big summer tentpoles in any given year -- this year, it's "The Avengers" and "The Dark Knight Rises" -- will reach outside the key 14-25 demographic in large numbers. When Hollywood producers veer outside this comfort zone and try to craft R-rated films for adult audiences, the results often seem like disastrous pandering, as with "What to Expect When You're Expecting" or Adam Sandler's "That's My Boy." MacFarlane's "Ted" felt exceptional precisely because it was actually funny and the public responded accordingly, while Steven Soderbergh's "Magic Mike" is essentially a low-budget indie film whose star and subject matter got it released by a major studio.

Veteran indie producer and distributor Ira Deutchman, who's been in the art-house business since the mid-'70s, reported a fascinating discovery on his own blog two weeks ago. At a recent film-industry conference in Brussels, he learned that the European box office has been growing, both in terms of revenue and admissions, and that most of that growth is attributable to older moviegoers showing up for adult-oriented pictures, not 3-D Hollywood imports. Now, it's true that the European population is older than ours, on average, but it's no secret that we're heading that way. Millions of American baby boomers are now at or near retirement age, with many more to follow. Leisure time is increasing for those folks, Deutchman notes, and the kids have moved out (unless the economy has driven them back home):

This is the most film educated generation that has ever existed, having been brought up at a time when film classes were added to the curriculum of every college and university, and film societies flourished. This generation is not constantly distracted by video games and texting and Facebooking. And when given a chance (witness “The Best Exotic Marigold Hotel” or “Midnight in Paris”) they turn out in significant numbers. Why is it that Hollywood doesn’t get that message? With each passing year, they churn out more and more product that is entirely geared toward teenagers, while simultaneously fretting about how that audience is no longer interested in going to the movies. They spend more and more marketing dollars trying to get the attention of an audience that has an attention deficit, while simultaneously raising admission prices until they have put tickets out of reach for the very audience they are trying to capture.

Personally, I think this argument has become more convincing than it ever was before, and my response has moved from "yes and no" to "yes, but." What the "but" largely boils down to is that the mainstream movie industry's inability to deliver pictures for grown-ups, except as a big, indiscriminate dump of festival acquisitions at the beginning of Oscar season, is more a symptom than a cause. It's a symptom of the fact that Hollywood remains trapped in an old, inflexible business model based on Gigantor-size spectacles -- in an age when everything else about the culture has gotten more niche-oriented and individualized -- but hasn't yet faced a big enough crisis to force major change.

One reader, apparently a theater owner, appended an illuminating comment to Deutchman's post: Why should he book movies for grown-ups, he asked, when they spend an average of $2 a person at the concession stand, while a teenager will spend $7? That guy evidently hasn't been to the Alamo Drafthouse chain in Texas, or the best of the Landmark theaters, or the IFC Center in New York, or the Enzian in central Florida, or any of the other theaters that serve food and drinks that grown-ups might plausibly want. Anyway, there's your answer: There's tremendous potential in making films for adults, no doubt, and somebody's going to seize it. But only if we buy the popcorn.